I’ll Have a Blue Christmas Without Speed!

Hingham, Massachusetts, December 8, 2012 – Ok, maybe not a blue Christmas, but Elvis loves excess and you can never have too much speed for The King.  The doors of the 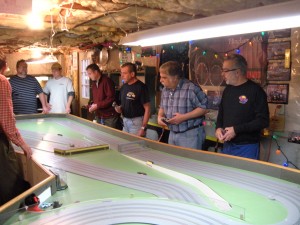 South Shore Speedway opened to a cold damp day.  Inside, things would heat up as drivers arrived from MA, RI, CT, and NY.  Long distance award goes to TK coming from Middletown NY.  Thanks to Peter Lentros for bringing the parts store from Modelville; everybody was able to find the tires, wheels, etc.  they needed.  Hopefully we can see the parts store at future races.

Everybody settled in and started the thrash to get ready for the debut of the new MARC Spec Stock Class with lexan NASCAR bodies.  John Reimels and Durf made sure everybody had a good looking ride by providing loaner bodies.  Most commonly heard question in the pits?  “What’s a Spec Stock?”  Followed by “What’s the best tire size”.  Paul “Heat Miser” Ryer gave some tips, but as usual he was tall due to heat issues.  In any case, people found time to read the rules and get dialed in.  We were ready to race.  You needed to be in the 2.6 – 2.7 lap time range to run with the speed demons.

First up were the amateurs.  Six drivers stepped up to MaxTrax version of a King track 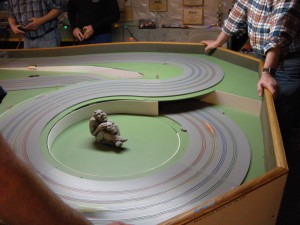 The best seat in the house - the famous "Donut"

known as Elvis.  Carnage was minimal and the guys were laying down some impressive lap totals.  Eric “Hard Luck” Handel had an excellent drive going but was plagued by an axle and body that seems determined to separate themselves from the car (I think the car was displaying a bit of self-preservation – JR).  A bit more tuning on that ride and he’ll be up front.  In the end Vince Tamburo put his local knowledge and a solid car to take the win with 376 laps.  Peter Lentros followed in second with 366 laps and Chris Takacs laid down 355 laps for third.  An outstanding drive by Chris considering he’s not a magnet car regular.  Hopefully we’ll see him around more often.  Oh Jimmy Colligan finished right behind Chris with 348 laps.  Great racing guys! 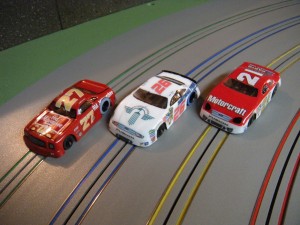 and Paul Ryer to the ranks.  As per the rules, the top amateur has the option of moving up to run in the Pro race.  Vince was ready to get on the track again and see if he could better his previous lap total of 376 laps.  Twelve drivers prepared to run.   John “The Doctor” Pileggi and Paul Ryer laid lap times in the 2.5 – 2.6 range. Across the field lap times were in the 2.6 – 2.8 range.  Pretty fast considering the required 23 tooth gear and stock armature.  John Reimels was racking up consistent lap totals followed by the pack of Stez, Erik Eckhardt, Vince, and Tom Gray who were separated by a few laps.  In the end The cool and calm Dr. Pileggi showed the value of making laps by beating the field with an impressive 418 laps.  Paul Ryer squeeked into second with 408 laps closely followed by John Reimels with 402 laps.  Stez rounded out the top four with 388 laps.    Interestingly Erik, Vince, and Tom finished within 3 laps of each other.  Close racing and a successful run of the new class. 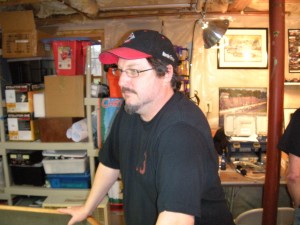 The glazed eyes, the far-away look, both signs of too much speed. Paul Ryer, our host, taking in the scene

run on Elvis since its move the Hingham, so setup was going to be a case of trial and error.  As with the Spec Stock class, the challenge here was finding a good balance of down force and speed.  There was some experimentation with Rock tires and slip-on tires, but the reliable sponge silicone ASTs, Slottech, etc. seemed to be the way to go.  Surprisingly the Super Stocks were quicker than the Spec Stocks which have the stronger bonded magnets.  Strong laps times were in the 2.4 to 2.5 range.  While practice was going on your humble narrator provided a lunch of baked ham, turkey, beans and potato salad in the hopes of lulling his fellow competitors into a food coma (fantastic food but I questioned the baked bean choice – 17 guys packed in a close envoriment – what could you have been thinkin? – JR).  Let’s just say it didn’t work.

At the end of practice five amateurs were ready to race.  Out of the gate, Vince showed that his win in Spec Stock was no fluke.  Excellent driving combined with a hot setup netted 401 laps leaving the rest of the field in the dust.  Great drive Vince and another move up to race with the pros.  Chris Takacs ran a strong second with 376 laps. A great day of racing for Chris who seems to have Elvis figured out.  Peter Lentros followed in third with 348 laps.  Sorry Peter, I thought the rocks would have worked better!  Durf rounded out the top four with a solid drive yielding 306 laps.

*Sorry guys, the Race Director failed to save the best lap results.  He will be dealt with severely.

With Vince moving up from the amateurs, eleven drivers were set to participate in the last 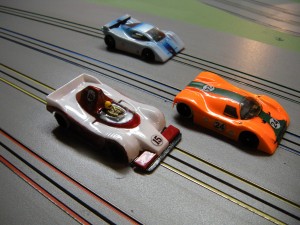 race of the day, Pro Super Stock.  Stez had left the building having to get dolled up for a hot date (Now I understand why he left early, getting dolled up could take awhile given the state of Stez – JR). Once again John Pileggi led the way with consistent lap times in the 2.4 range and put up a total of 448 laps.  Close racing between Rob, TK and John Reimels would decide the next three spots.  In the end a minor mishap slowed TK who is showing excellent speed with his Slottech.  Rob Hayes took second with a total of 421 laps.  TK rolled in third with 416 laps beating out John Reimels by a lap.  Vince Tamburo showed off his driving skills and put up an impressive 409 laps which was 8 laps better than his run with the amateurs.

Another successful and enjoyable event at the South Shore Speedway is in the books.  It was great to see founding MARC member Jim Macartney and new to the MARC series 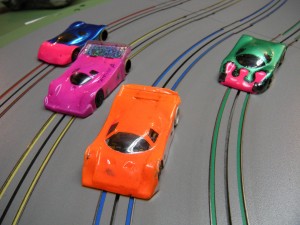 Chris Takacs and Jim Colligan.  We hope to see a lot more of these guys and the rest of the MARC faithful at future events.  Thanks to everybody for making the trip and we’ll see you next time at Stez’s Nantasket Beach Raceway.

This is the race report recorded December 8, 2012