Ashland, MA,  May 11, 2013 – Ever get that feeling of Déjà vu?  That’s a glitch in the Matrix… Oh wait, different story.  It’s because we are back in Ashland finishing up a very

Amateurs doing battle with 902s on the Clubman

competitive season of racing.  John “The Doctor” Pileggi had both classes wrapped up for the Pros, but the final standing wouldn’t be decided for everyone else until the time expired on the last heat or your car gave up and died on the track.  Last time we were at Modelville it was Spec Stock on the and Super Stock on the Champion.  This time the Clubman that was recently moved from Dan Decosmo’s Taj Ma Ho for the upcoming HOPRA Nats and the Scorpion would be the venues.  Both tracks were in perfect shape and the races went off without any problems.

First up was 902s on the Clubman.  This was the first race on the Clubman since it was moved and this race proved the track is ready to go.  MARC runs the 902 with a spec tire 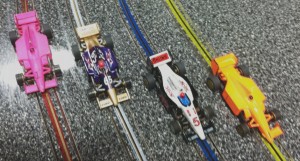 that is tall making these cars a challenge to drive on some tracks.  During practice the drivers honed their skills and the amateurs were up first.  Vince Tamburo, Benny Leyro, and Peter Lentros were in a close point battle for the Production Series Championship.  This race would set the finishing order for the season.  We had a great field of nine drivers for this race.  Racing was fast and the crashing was minimal.  A great drive by the whole group.  Only nine laps separated second through sixth.  In the end Peter Lentros laid down 253 laps taking first and getting the move up to race with the pros.  Vince had a tough heat in red but bounced back with a total of 235 laps to take second.  Don Hall made an appearance and was strong as usual with 233 laps for third with the fast lap of the race of 4.213 in white.  Hopefully we see more of Don, who is a strong driver and all around good guy to race with, next year.  Benny Leyro finished out the top four with 230 laps.  Tom Bussmann got a little carried away with the super glue and ended up with one glued shoe in red.

The Pros took to the track next with Peter taking the move up from the amateur race.

Pros vying for top honors in 902

Several of these guys know this track well from the many years racing on it at Dan’s.  Paul Ryer and TK finished were done with their rotation first.  260 seemed like a good number until the totals for the some of the other drivers were posted.  Damn these 902s!  They taunt me. In any case back to the racing.  When the last heat ended Erik Eckhardt had put up an impressive total of 280 laps with 72 laps in White and in Blue.  Excellent drive Erik! High lap total for the day.  Jonathan Reimels made an appearance and finished second with 275.09 laps beating

out dad John by a section.  John’s third place finish included the fasted lap of the day of 3.725.  One less off John and you would have had him!  John Stezelecki showed he still has talent with the fast stuff and put up 269 laps for fourth.  Peter bested his amateur results with 259 laps versus the 253 he had in the first race. John Pileggi was resting up for the next race finishing fifth.

Now that the 902s were done it was time to move on to the tasty part of the program, Compression Molded Polymer Modified (CMPM).  When the HOPRA Nats come to Modeville in June, this class will be run on the Scorpion so it was decided that MARC would

run them on this track to get some practice.  These cars can be tough.  Too much down force and you burn up your motor, too much crashing and you beat up your chassis.  You have to be on your game to drive these.  After 2 hours of practice, everyone was ready to start.  First up were the amateurs.    But wait, who’s that running through the door?  Phil Hilgert arrived just as the first heat was ready to start.  “Practice? I don’t need no stinkin’ practice”.  Phil jumped right in to pilot a loaner car from Durf and away we went.  Early on marshaling this race was akin to playing Whack a Mole with a 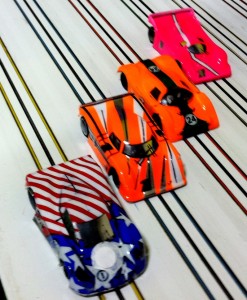 bunch of rabid moles.  But as the heats went on, things settled down a bit.  Tom Bussmann showed that his rocketship has still got the zip and took first place with 630 laps and set fastest lap at 2.127.  Benny was not posted the second highest lap total with 605 laps.  Vince showed he’s got what it takes in first CMPM race finishing third with 556 laps.  Peter Lentros rounded out the top four with 531 laps.  Phil put up a respectable 514 laps considering he had no practice.  We want to see more of Phil in the future.

Now the Pros were on the track with Tom Bussmann moving up from the amateur race. 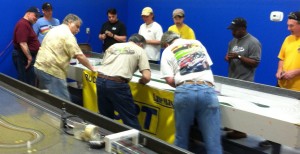 Joining us for this race was Wayne Wallace.  Thanks for making trip Wayne, great to race with you.  Not much to say about this one.  John “Doctor” Pileggi won this one.  He schooled us, beat us with a stick, however you want to say it, he was on fire!  Consistent lap times in the low 2 second range netted John a total of 757 laps with a massive 141 laps in Orange.  At the end he was ahead by 120 laps.  An outstanding run!  And now for everybody else, Jonathan Reimels finished second with 637 laps.  Tom Bussmann showed he’s got stamina and finished third with 629 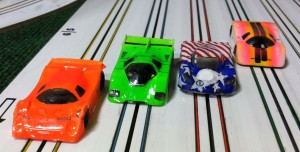 laps, one lap off his amateur race total of 230 laps.  Paul Ryer made an appearance in the top four, not burning up with 628 laps.  Tom Gray set fastest lap with a 1.828 in Orange. TK had some gear issues and Dave Muse decided to save his gear and park after the first heat.  So, if you’re coming to the Nats, I think you know where you’ll need to be for lap totals.  We’ll see how Mr. Pileggi’s total holds up then.

You’d think after running the CMPM beasts everyone would be ready to quit, but a group decided to stay and run a three minute heat Super Stock race on the Clubman.  This will be the track used for the Pro Super Stock race for the Nats so practice time on the track is always helpful and it proved to be another race that went off with no problems on the recently moved track.  After an half hour of practice, the race started.  Once again Mr. Pileggi took first followed by Jonathan Reimels.  Vince Tamburo showed why he’ll be in the pro ranks next year taking third, followed by Peter Lentros in fourth.