The Spec Stock Class was run on the Buck white Scorpion track. The seldom used track 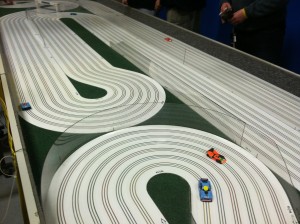 Spec Stocks on the Scorpion

worked perfectly today and the drivers seemed to get used to the unusual rhythm created by the Scorpion’s large radius to sudden small radius turns. This is not an easy task for those drivers who are not used to driving on a Scorpion track.

This was Peter Lentro’s first amateur victory of the day winning by 26 laps over new rookie Michael LeBlanc. Peter smashed down 492 laps on the Scorpion – a real dominating victory for Peter.  The victory also gave Peter the right to enter the Pro Spec Stock race.  Michael did a fantastic job taking second place and driving an impressive 466 laps on a track that is difficult for the 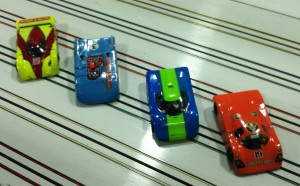 most experienced drivers – really an amazing performance for a rookie in a first time MARC event. Don Hall the third spot one lap behind Michael with 365 laps. In a shocker and I do mean a shocker, Eric Crash Handel took the fourth place ribbon, 450 laps and knocking off  Vince Tamburo who took the fifth position with 444 laps. Bob Hughes ran on the Scorpion for the first time and took the sixth spot with 439 laps. Durf blew a motor but still managed to put up 397 laps to take the final position. 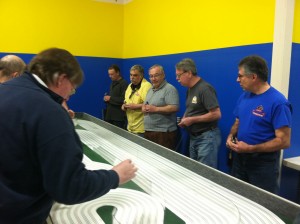 Pros on the Scorpion

giving him the Pro Spec Stock Class win with an incredible 53 lap victory over second place finisher Erik Eckhardt who did pretty well with 509 laps on the scoreboard. Paul Ryer took the third place ribbon with 505 laps. John Stezelecki blew a motor with two heats do go but the motor kept chugging along long enough for him to put up 500 laps and take the fourth place ribbon. Peter Lentros’ motor was a little tired after the first amateur race which resulted in him scoring less laps than he did in his amateur victory.

The Super Stock Class was run on one of MARC’s favorite tracks at Lenjet, the Bowman Champion track. The Champion track has been the most widely used track at Lenjet for not only MARC but for HOCOC and the OUTLAWS T-Jet Super Stock classes as well as special ECHORR SS events. It’s unusual when two drivers, one each from Pro and Amateur win both their races twice. Today at Lenjet was one of those days.

Peter Lentros won this race with an exceptional run on the white lane scoring 78 laps – no other driver would come close to these lap totals on this lane. Vince Tamburo with 71

laps on white was as close as anyone would get to Peter on white. Peter’s 298 lap total would win the amateur class and propel and move up Lentros into the Pro Super Stock race. Congratulations to Peter for a fine victory. Vincent Tamburo did a great job trying to keep up with Peter but fell short by 3 laps to take the second spot and a best lap time of 3.308 seconds. Don Hall’s 277 laps gave him the third spot while Bob Hughes used some of his 1/24 scale racing skills to claim the fourth place ribbon with 269 laps. The Super Stock victory gave Peter Lentros his second win of the day in amateur class. Results below.

John Pileggi won the race by seven laps over Paul Ryer who took the second place ribbon. The big news here was that John banged out an incredible 87 laps on gutter red lane but

did far less laps on the inside blue lane with 76 laps. It didn’t matter because when John was done, he scored a total of 325 laps to Paul’s 318 laps. John also had the best lap time of the day with a best lap time of 3.054 seconds. Paul had the best total of the day on blue with 82 laps Peter Lentros took the third spot knocking down 299 laps and one more than he scored in the Amateur race. Tom Gray rounded off the top four finishes with a lap total of 273 laps.

NEXT MARC RACE IS AT LENJET ON MAY 11TH. CLASSES WILL BE 902 and Compression Molded Modified