Cambridge, Massachusetts, March 23, 2013 – After three months of preparation, long hours of working in an N95 mask, to tired classic rock, the door to the Catfish Basement 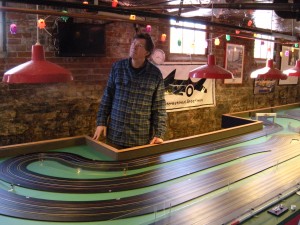 swung back, and… the friends entered.  Set out before them, the new Brystal Catfish International HO racetrack.  84 feet of expanded PVC and continuous rail, crafted with the utmost dedication and care by Brystal’s Bryan Henden, rock-solid table extension by Dr. David Newman, flawless computer race management by Dave Muse, and designed in serpentinesse by Catfish Sr. It was there, it was done, and it was ready.  And the racers, they saw (and said) that it was good.

I have to say right here that while we are so grateful for a tremendous turnout, with lots of our favorite folks, we were particularly thrilled to see The Jersey Guys make the trek, all the way from the Garden State, for the Catfish Inaugural.  Thank you, Jerome, Pete, 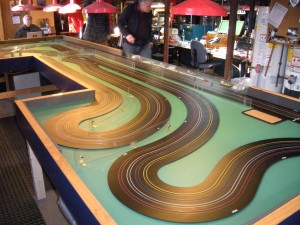 and especially long-distance champ Tony, for his first time in da House of Catfish.

Once we had the rails clean, 21 racers had at the track with their Can-Am bodied G-Jets, at an enhanced 14 volts, which seemed optimal.  Consumption of free-range, locavore donuts, fruit, coffee, and juice continued apace.

The eight Amateurs led off in a round robin Can-Am G-Jet program, managed under Race Coordinator®, running on our Mac PowerBook.  Nobody but nobody had anything for Mike “The Machine” Resnick on the day, racing one of Stez’s preternaturally fast G-Jets, as he covered second place by 19 laps (!), and set the track’s first G-Jet record 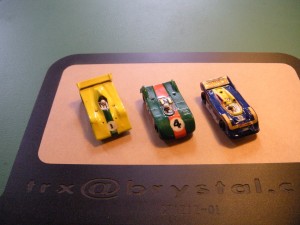 at 6.206 sec.  Peter Lentros, Vince Tamburo, and Tom Bussmann completed the top four.  Please see the Results, here on the site, for full finishing positions of all of our racers.

13 Pros and the upwardly mobile Mike Resnick lined up for the Pro G-Jet program.  This was muchmore closely contested, with just five laps covering the top four spots.  Now that’s G-Jet racing!  For some reason, people named with some variant of “John” took the three podium positions:  Reimels Sr., Pileggi, and Reimels The Younger.  They were followed very closely by the ascendant Herr

Resnick, his Stezmobile® still ticking overlike Elon Musk’s private, full-race Tesla, after a full Amateur program.  Jonathan, who later had to split to rescue his beloved Jen from a slipped disc, re-set the G-Jet track record with a 6.111.

Following the G-Jet program, we were given a musical interlude, something to hoist the

Our half-time show - better than the Super Bowl! Fantastic rendition of our National Anthem. Jules Flavelle and Cal Mirowitz

cultural level of the proceedings.  Ms. Jules Flavelle and Mr. Cal Mirowitz, fraternal twins, settled before the raceway’s Shure SM 55 “Elvis” mic, and sang us their cover of Berklee alumna Madi Diaz’s “A Little Bit.”  Heartbreakingly beautiful.  And then, as is de rigeur at Catfish Internationale, they followed with their rendition of the American national anthem.  Festoons!  Big applause, bigger smiles, and a few, very grateful tears.  Do check out their YouTube channel, shared with their sister Goldie, now pushing close to 300,000 views…

Our second program of the day was Super Stock, in which we would find out, for the first 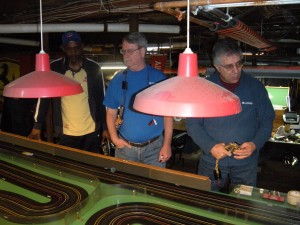 The only items less than immaculate - the dust on the overhead lamps!

time, what it’d be like to run fast cars on the new course, with many of the best HO racers in the Northeastern U.S. throwing down.  Early on in the Amateur program, it was easy to see that Vince Tamburo and Benny Leyro had the field covered on pure speed.  But on consistency, it was clear that Mike “The Machine” Resnick would challenge nonetheless.

Vince started hot, but the track took a toll after he left Yellow (61), and he never put up another lane total to match that.  Benny, by contrast, had a pedestrian Yellow (57), then ran the freaking tablewith a 67 on Blue, 64 on White, and finished on Red with 61.  M. Resnick, with a steady but unspectacular mount, just kept putting up double-digit lane totals that began with a 6.

In the end, he was a mere two laps behind the all-conquering Benny, and a full ten over our Sputtering Spartan, Peter Lentros.  Vince was fourth.  Full details?  See Results here on the web site.  Benny set the track record with a 4.043.

When exactly did it happen?  No one can remember for sure, but Jerome at some point went into a balletic, nosedivish marshaling move, and the Catfish International clock, mounted six feet up the brick wall behind him, was dislodged by his flying foot.  Yessir, that’s a pure physical talent.

Pro Super Stock… Some very fast racecars on the day, and I thought it would be a dogfight.  Which it was; for second place.  Tony Mickles, Tom Kanan, Dr. John, Reimels Sr.,

MARC Directors Present and Past - Paul Ryer and Tom Gray

P. Ryer, and Benny each had both strong cars and a feel for the new track.  But home track advantage, which I had only grasped in the later hours of Friday night, carried the day, and the grateful, half-dead track owner posted a 12-lap win, with top lane totals in all but White.

Reimels Sr. was second, followed by Dr. John Pileggi, and our estimable MARC Director, Paul Ryer.  Benny was fifth, a lap behind Paul, and Tony Mickles, after losing his guide pin twice, was still just two back of Benny.   After the race, we took up a collection and bought Tony some CA glue.  8-)  He’s gotta feel good about his future performances on this racecourse.  And TK, held together with Band-Aids and an Ace bandage, re-set the track record with a 3.915.

So, a totally gratifying turnout.  We were so pleased to see everybody.  All aspects worked well, and it was great to see so many smiles.  It’s really satisfying to have set up a pleasing raceway space around this new Brystal racetrack, and I thank you all so much for making the trip for our inaugural.

Many thanks to main squeeze Gretchen Adams for all the support, lo these many months, and culinary counsel on race day.  Without her tremendous support, the day would have been something much less.  Finally, thanks to Brystal’s Bryan Henden for making us a beautiful, rewarding racetrack, under relatively frigid conditions.  I hope your hands have healed nicely, my friend.  Next time you visit, you can use the front door.