Ashland, MA, February 23, 2013 – The Miniature Auto Race Club (MARC) postponed this race at Lenjet on February 9th due to the blizzard of 2013 and rescheduled it for the 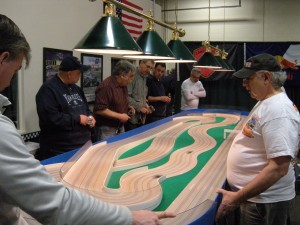 The day started with 902 Production cars ont he Champion

23rd of February. We almost had to cancel it again due to a predicted snow storm but less than twenty four hours before the start of the race, the local meteorologists changed the forecast and downsized the storm to a much smaller weather system (that was nice of them, I wish they’d downsize all the storms –JR).

MARC ran two races, BSRT Production Formula One on the Champion Track and the much anticipated Ceramic Super Stock race on the Purple Mile Sovereign. Both classes were broken into amateur and Pro Division. The winner of each amateur race would qualify to move up into the Pro Division race. 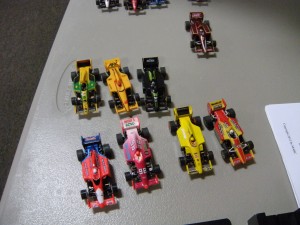 checkered flag with a 19 lap victory over second place finisher Peter Lentros who managed to bang out 251 laps. Resnick’s victory enabled him to move up to the Pro Division Production race – very nice win Mike – congratulations on your very fine Amateur victory. 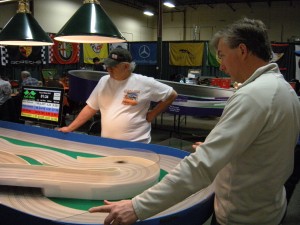 A slow day at the marshalling stations but all this would change when we got to the Purple mile...

out 277 laps beating John Pileggi by three laps. This race was very close right up till the end but Hayes ran a spectacular race and managed to take the win. Mike Resnick who moved to the Pro race with a stunning victory in the amateur division took a third place in the Pro Division race. Congratulations to Mr. Hayes for a fantastic victory

The MARC Ceramic Super Stock event on the Purple Mile Sovereign may have been one of the most anticipated HO races in the country. Peter Lentros teamed up with James Town, 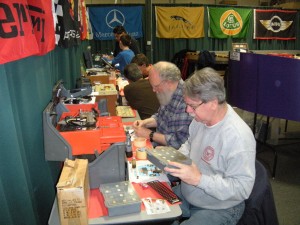 aka Spiderman, to have him use his video making talent and record portions of the race. This would give many drivers across the country to see for the first time ever a HOPRA type Super Stock class car running on the mighty Purple Mile.

It was only a month ago that the UNITED STATES FORMULA ONE 902 GRAND PRIX was held on the Purple Mile. In that race, the F1 902 cars equipped with stock arms, slip on tires, C4 magnets and F1 hard bodies ran on the track. Parts of the race were videotaped and broadcasted around the country via YOUTUBE. It was the first time the nation ever saw H O cars whizzing around the Bad Boy Purple Track.

Much like the first Production event of the day in the Amateur Division, the winner, Vince Tamburo won by a large margin which moved him up to the Pro Division Race.  Vince Tamburo took that honor with a 25 lap victory over Peter Lentros. Mike Resnick had a very comfortable lead by five laps per lane until car failure with over two heats results in him not finishing the race. Vincent’s victory would help fill the Pro Division race with eight drivers. Congratulations to Vince and his move up to the Ceramic Super Stock event. 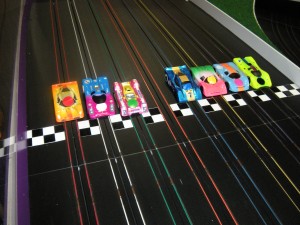 The Amateur field lined up and ready to go

In the Formula One 902 race last month on the Purple Mile Tom Kanan took the victory over Rob Hayes by two laps. That loss and horror of hooking up his controller wrong at the 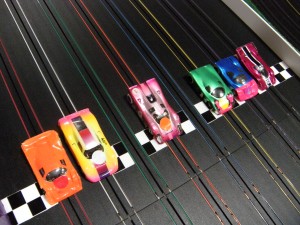 Pros lined up ready to go - all except Rob... In hindsight, we should have started without him...

start of a heat stayed stamped in Rob Hayes mind for the past month.  FORGETABOUTIT was Rob Hayes motto going into this race. Erase the Formula One loss and concentrate winning one of the biggest MARC events this season. That’s what he had to do and that’s exactly what he did.

Rob took control of the race very early, stayed out of trouble on the track, especially in the gutter lanes and went on to win the first MARC PURPLE MILE SHOWDOWN in a very impressive manner. Five Hundred and Forty Five Laps! That’s a lot of laps in forty minutes of racing. Congratulations to Mr. Hayes for a great Super Stock victory. Well deserved win and congratulations for two Pro MARC victories today.  John Pileggi took the second spot banging out 539 laps while Tom Kanan who won the Formula One Grand Prix on the Purple a month ago took a third with 523 laps. Rounding off the top four podium positions was John Reimels at 520 laps. Forty minutes of driving looked like it really took a toll on some of the drivers.  Exhaustion was probably the word after race. Congratulations to all the drivers who competed in the Purple Mile Showdown today. I’m sure it’s an 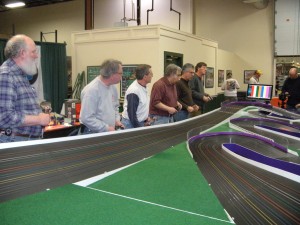 The fast and the furious...

experience that none will forget.

The MARC next event is at Benny Leyro’s March 9th