New Milford, CT,   October 13, 2012 – Needing to scrape the frost off the windshield at 4:00 in the morning is a good indication that winter is close at hand.  But that didn’t

The Fast and the Furious

keep 10 racers from making their way to the backwoods of Connecticut for the second MARC race of the season at Bill Bonsma’s Mighty Atlas Raceway in New Milford, CT.  Considering the track sections were older than most of the racers in attendance (but not all – JR), it was in fantastic shape – the layout perfect for the 902 Production cars and the ridiculously fast CMPM Modifieds that were about to be raced.   Coffee was off limits – clearly steady hands and trigger fingers were going to be a necessity for negotiating the in-field esses on this fast track.

First up were the three amateurs in attendance, the field cut short by Durf and Eric’s lack

of attendance due to Durf’s mobility issue (or lack thereof…).  Hopefully he’ll be back on his feet in time for the next race.  The good news was the appearance of John “Turbo” O’Brien, good news for everyone but Benny Leyro and Vince Tamburo that is.  John showed no sign of rust after missing the first race of the season.  Once the green flag dropped, Vince fell out of contention early when his body decided to go left while the chassis went right.  By the time things were straightened out, Benny and Turbo were long

Our fearless leader - who's gonna screw around with him

gone.  Benny was faster in the middle lanes while John mastered the gutter lanes.  In the end, mastery of the gutters proved to be the more successful strategy with John taking the win by five laps over Benny followed by Vince’s rebodied car.

With Turbo deciding to take advantage of the option to race with the Pros, the field was set with 9 racers vying for the top honors in the Pro division.  This race quickly turned into a battle of the “Johns” – only Bill Bonsma could break the stranglehold the Johns had on the top five finishing positions.  The top John was Dr Pileggi edging out the youngest John of the group, Jon Reimels, by one lap.  Bill Bonsma used his local knowledge of the track to keep the “Johns” honest finishing only 3 laps off 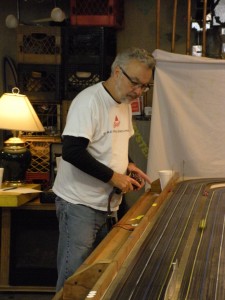 Vince getting some practice

the winning pace in third.  The turbo-charged John, John O’Brien finished fourth with the senior John, John Reimels rounding out (literally and figuratively) the top five.  Paul Ryer finished sixth followed by yet another John (you can never have too many johns…) John Stezelecki, Tom Kanan and Dave Muse.

Next up was a 2 hour practice session for the incredibly fast CMPM Modifieds.  Bill had fire extinguishers at the ready – armature temperatures were on the rise as folks dialed in their cars.  After an hour of practice a much needed break in the action was called for as lunch was served – a wonderful spread of pasta dishes that would rival the best restaurants around.  Special thanks go out to the Bonsma household for providing such a fantastic lunch.  After lunch, it was back to tuning these buggers to last the rigors of a 5 minute heat while maintaining the down-force required to make them

drivable – not a easy task.  At the end of the two hour practice session, the amateur contingent lined up their cars for the start of their race.  Vince elected to go with a mild C4 magnet setup hopeful that either Turbo or Benny would encounter issues with the faster P10 magnet CMPM cars – this proved not to be the case.  Benny got himself in a deep hole with a poor performance on the yellow gutter lane – a hole that he just couldn’t get out of despite setting the highest single lane lap count when he got to the white lane.  Turbo ran a consistent race to win by 27 laps over Benny.  Vince finished a distant third, the C4 magnets clearly no match for the much stronger P10 magnets.

Once again Turbo elected to take advantage of the amateur move up to race with the Pros; we should have charged him two entry fees since he participated in all four races of the day!  With the departure of Stez and with Dave Muse deciding to sit this one out, we 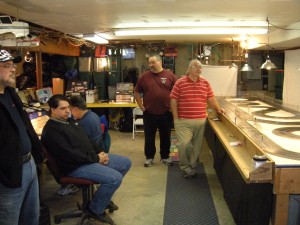 When's this meeting gonna end - I want to go racing

had 7 racers for the Pro event.    TK elected to run a SlotTech car breaking the monopoly that BSRT had on the field.  Would this prove to be a “winning” hand?  You betcha it would.  While Dr P and TK were tied going into the last heat,  John was in red while TK was in blue so the outcome was somewhat inevitable – while John ran a great heat in red, TK had a better heat in blue beating John by 6 laps.  Bill Bonsma pushed hard but still fell 3 laps behind in third followed by John Reimels in fourth and Jonathan Reimels in fifth.  Turbo finished his fourth race of the day in sixth with a struggling Paul Ryer in seventh.

Thanks to everyone who made the trek to western Connecticut for a fantastic day of racing.  Again, special thanks to Bill for providing both a wonderful lunch and a well prepped track for an exciting day of racing.

Next Up and Other Notes

John O’Brien misplaced one of his part boxes during the event.  Please check through your equipment, if you find it, please notify him, I’m sure he’ll be grateful! 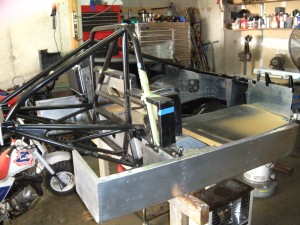 Bill has lots of toys in his basement but none better than this Lola T212 he's restoring for a customer...

racing open bodied Lexan G-Jets and Super Stocks.  A few of us (Rob Hayes, Erik Echardt, Dan DiCosmo, Jonathan Reimels and yours truly) will be in Derby, UK participating in a 24 hour enduro event hoping that third time’s the charm…

Paul Ryer has elected to use NASCAR bodies for the Spec Stock race at his South Shore Speedway for the December 8th race.  You now have 2 months to get your body ready!