MARC Season Opener and the 1st Annual Jonathan Reimels “How the heck did you do that?” Spectacular Crash contest, Three Dog Night, One good day, and the saga of the Invisible Man.

Thompson, Connecticut, September 15, 2012 -   The day had come to start another season and, in the words of the immortal Three Dog Night …

Whenever I feel the need to leave it all behind

Or feel the need to go to race

I find a quiet place, far from the human race

Out in the country

In a seemingly Déjà Vu moment 12 hardy racers and the Invisible Man returned to the country setting of last season’s final race to start the new MARC season.  With Can Am bodied G-Jets and Super Stock on the menu, tough racing was expected to be the theme of the day.

First up race of the day would be the 4 Amateurs in the G-Jet race.  Eric Handel, long distance traveler Benny Leyro, Vince Tamburo and your host Durf Hyson lined up to go at it.  This race started with a bang and ended with an oops. The racing was tight and 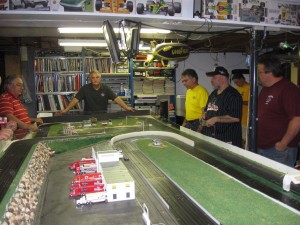 The stage is set - we're ready for another season of RACING

progressed quickly despite the host’s concern with how the laps were counting.  As people other than the 4 drivers kept an eye on the counting it became obvious something wasn’t right.  Nonetheless the race ran to completion and somebody won. Eric Handel probably lost, but lost well as the second race would prove.

After a short delay while the host (yup, it was all me…) corrected his erroneous set-up in the computer the 4 lined up again to re-run the race.

This race would be a real barn burner.  With a zillion lead changed and two long stretches where it seemed Vince’s yellow VDS and Durf’s white Chaparral McLaren M12 were Velcroed together side by side the 4 racers went at it. Lap after lap the lead pack whizzed around while Eric Handel drove the race of his life.

When the race ended and the dust settled it was Benny taking the win with 86 laps (3 minute heats), Vince 2nd with 86 laps and Durf 3rdwith 86 laps . With the top 3 finishing in 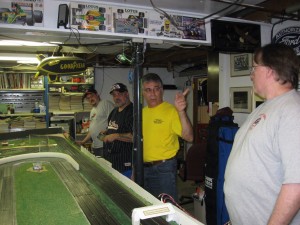 sections 10, 7 , and 5 it couldn’t have been much closer . The top 3 finished within a stretch of 5 feet. Finishing 4th after an excellent effort Eric Handel racked up 84 laps 21 sections.  This translates into about a lap and 3/4ths off the lead pack – a terrific effort.

Time to line up the 8, or maybe 9, pros for their G-Jet race.  With the order set the 1st 4 lined up to go. Erik Eckhardt would start in Red with Paul Ryer in White, Dave Muse in Blue and Stez in Yellow. The light went green and off they blasted. Ironically, the end of the 3 minute heat would see them finish the way they lined up. EE had 24 laps, Paul 23, Dave 22, and Stez 21. The second heat would see Dave out and John Reimels in. EE would add 26 laps to his total with Paul and Stez at 23 each and JR at 21. Heat 3 would see EE step out and Tom Kanan, the other long distance traveler, joining in. The 3rd heat totals were Paul 23, JR on 22 with Stez and TK both posting 21’s.

Heat #4 would see Paul sitting out and John Pileggi sitting in. The racing stayed close with Stez and JR running 23 laps while John Pileggi did 22 and TK did 21.

I'm a bit rusty, does the pointy end go in front?

driver – which spot he occupies depends on your attitude on when you start to account for the arrival of the Invisible Man. Do you start to count him on his arrival? Or, do you only count him after he makes himself known to everyone? Either way the close racing continued with JP posting a strong 24 laps while all 3 of the others   Stez, TK, and the significantly late arriving Rob hung 20’s on the board.

Heat 6 would be marked by 3 notable things. Big lap totals, the return of Dave Muse to the track and the emergence of the Invisible Man. With TK running 24 laps, JP and Rob both running 23’s and Dave returning to the race to put 20 on his total this was a fast heat. Sometime during this heat the Invisible Man put on his costume and made himself known to the room by pointing out that Dave Muse had been in and out of the race and then back in whilst the Invisible Man , now in a disguise that made him look like a replica of Bill Bonsma , hadn’t been in yet at all . A quick head count of the eight Pro’s in the computer against the 9 we could now see would lead to a run-off race for the 9th man.

Who would have thunk it? Bill Bonsma invisible. What a concept. (entirely my fault – I set up the race – JR).

Heat 7 had TK out and Erik back in. This heat was a lesson in flying as EE ran 25 laps, JP and Rob each 24 and Dave a solid 20. Things were starting to take shape as JP was high score in the clubhouse with 93 laps and Erik was on 75 after 3 heats.

Heat 8 would see some more big totals and would continue the string of having more than 1 driver on the same total for a heat. This time it was EE and Rob with 24 a piece, Paul Ryer on 23 and Dave Muse closing out with a 21.

Erik Eckhardt’s 24 laps in the final segment locked him into 1st place with a 99 lap total. 2nd went to John Pileggi with 93 and 3rd to Paul Ryer with 92. From there the finishing order was Rob in 4th, Stez in 5th, the Invisible Man Bill Bonsma after his make-up race in 6th, Tom Kanan and JR tied for 7th and Dave Muse in 8th.

Next up on the agenda was the condiment –free lunch beautifully prepared by Susan, to 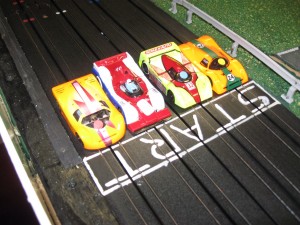 Three, Two, One - Blast Off

whom I give many thanks. As to the condiment conundrum and as a small piece of advice to whomever asked for them… next time try asking me.  I’m not sure Handel is aware of the actual availability of such things.

Lunch came and went as practice for the Super Stock races commenced. Two hours of fussin’ and fiddlin’ later and it was time to start the races . First up would be the 4 Amateurs. This race would be more hectic than the first and would see the top two spots exchanged. The Vince and Durf show would return for two more heats with Vince posting 47 + 50 over heats 1 and 2 for a 97 and Durf posting 46 + 50 for 96. In the end the order would be Benny Leyro in first with 219, Vince Tamburo in 2nd with 202, Durf in 3rd with 194 and Eric Handel in 4th with 182.

The last race of the day would be Pro Super Stock. With Benny, the Amateur move-up and the Invisible Man still in his Bill Bonsma costume but without Stez there were 9 drivers running for the prize.

Heat 1 would start the ball rolling with Rob, EE, Benny, and Dave Muse in the starting gate. Five minutes passed and the heat ended with Rob having 60 laps with EE1 behind, Benny on 56 and Dave in with 54.

Heat 2 would see EE out to a marshals post and Paul Ryer in on Yellow. Paul, the early favorite to take down the $5 prize in the “How the Heck Did You Do That” crash contest 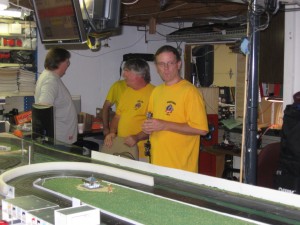 now would have a faster car with which he could try to top his amazing antics with a G-Jet .Off they went with the green and when the clock struck 5 Paul had saved the spectacular for use on his lap total of 56 in gutter yellow to win the heat. Rob’s 55 was 2nd, Benny’s 52 was 3rd and Dave’s 42 netted him 4th.

With Dave Muse stepping out to be replaced by the Bill Bonsma look-alike heat 3 was ready to go. And go it did with some really high lap totals across the board. Rob with 62 , Bill with 58 + , Benny also with 58 but a smaller portion of lap 59 than Bill and Paul with 56 made for the highest scoring heat yet  with the 4 scoring a total of 234 laps . This would prove a short-lived accomplishment and a portent of things to come.

Heat 4 would be even faster than heat 3. With John Reimels in and Benny out the group would clock up 239 laps in the 5 minute period. They were divided up between Rob with 66, Bill with 59, JR with 58 and Paul with 56. This heat finished the race for Rob Hayes and put him in the club house with a 243 lap total.

Heat 5 was the mid-point in the race. With Rob out and finished Tom Kanan stepped up to the plate. In this heat Paul put up the big number with a 62 lap total. He was followed by JR with 60, Bill with 56, and TK with 52. This gave Paul a heat win to go with his contest lead.

A chill passed through the room as a shadow of doom passed over the track. The shadow 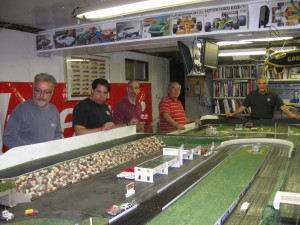 Something interesting must be happening over there...

was caused by John Pileggi stepping up to the yellow lane to start his race. Anytime you see JP step to the track with a Super Stock car to race fear is an appropriate response. JP wasted no time as he put his stamp on the proceedings with a strong 64 laps in gutter Yellow, JR with 61, Bill with 58 and TK with 58 closed out the scoring in heat 6.

Heat 7 would be JR’s turn to shine with his 63 lap heat-leading total. Erik Eckhardt, back in the race would fight JP to the finish in this heat with both scoring 56 laps . TK would put up a 53 while this was happening.

By now, at the start of heat 8 , the possible finishing order was becoming evident . With Rob in a provisional 1st place with a 243 total and JR with 242, Jp had his work cut out for him. Finishing the heat in 1st with 59 laps set him up for the finale. TK was 2nd with 56, EE 3rd with 53 and Dave Muse back in the saddle with 50.

Now the stage was set for JP as he needed to run no less that the second best segment of the day to displace either of the top two.  Which, of course, he promptly did. The soft hissing noise in the background was the air being let out of Rob’s and JR’s balloons as JP relentlessly piled up the laps. He was coming and coming fast. The only question was would he get them both. Inside the last 30 seconds as the clock counted down and the laps counted up JP’s lap 63 came and went taking JR with it. Then lap 64 rang up and JP had tied Rob When lap 65 clocked up on the screens just before time ran out JP had vanquished the field.

Although there were some other spectacular crashes nothing topped Paul Ryer’s  end over end flip of a G-Jet down the front straightaway and OVER the light bridge like a well kicked field goal . That’s a long way from the turn where it all started and a lot of air for a G-Jet .This earned him the $5 prize for winning the Jonathan Reimels Memorial “How the heck did you do that” Spectacular Crash award .

All in all a good day of racing. I would like to thank everyone who came with a special nod to the 3 long haulers. I would also like to thank Sue for feeding us all and for the bakery goodies.

Hope you all had fun… “Out In The Country.  Where the rivers like to run, we stood together and took back something worth rememberin “

The next race is 902’s and CMPM cars at the Invisible Man’s Mighty Atlas Speedway.

Come one, Come all.