Danbury, Connecticut, March 17, 2012 – Somewhere in the woods could be heard the soft sounds of a distant banjo … 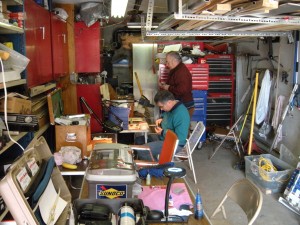 Getting ready yo do battle...

squirrels, chicken hawks, and crows to visit the home of Thompson Raceway Park.  Good weather allowed for some al-fresco racing with Can Am G-Jets and Lexan Super Stock on the menu.

With 11 racers up, the G-Jet race took on a different look as two unusual race formats were chosen by a vote of the racers. The first was to run a single round robin of all 11 drivers (current rules limit round robins to 9 racers – JR).  The second was to use the European rotation option. This had the drivers rotating evenly around the track while the lane rotation went Yellow , White , Red , then Blue instead of the typical Yellow , Blue , White , Red .

The first heat had the Reimels greater and lesser, Erik Eckhardt, and The Stez getting things going. With Jonathan starting in Yellow he would be the first to post a number.  At

the end of segment 4 he hung a 145 total on the board for the Pros to shoot at.  Segment 5 saw the amateur target set as the new Champ and the first of the band Joes , Paul Ryer, took a break from his Ian Anderson Tribute to hang a 135 on the board . Segment 6 had band Joe and wind instrument veteran Dave Muse taking the Amateur lead recording his 142 lap total.  Segment 7 had our current band Joe , John Pileggi , racking up a 154 to take the lead in the Pro category . Classically trained on the Herald Trumpet, 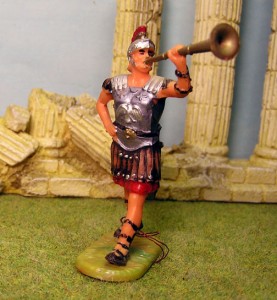 the advances in technology and the design of the automobile have forced him to have his trumpet bent into a swirly horn so it can be transported safely in today’s compact cars .

Segment 8 had Tom Gray posting a 134 on the pro board while Segment 9 saw Rob Hayes , the King of many band Joes , post a 153 to almost topple John Pileggi from his 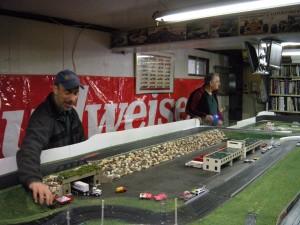 The challenging back straight

perch in 1st .  Segment 10 had Eric Handel posting a 125 in the amateur class.  Segment 11 was the last one and closed out the scoring. Erik Eckhardt another band Joe, put down his guitar and put up a 153 to finish 2nd in Pro just segments behind John Pileggi and ahead of Rob Hayes. In a surprise the host hung a 134 total in the Amateur class to move into 2nd place. 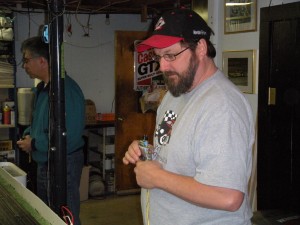 After a munchin’ of luncheon prepared to my eternal gratitude by the Chef of Chez Hyson, the ever helpful Sue, Super Stock practice commenced. It was quickly obvious that it would ba some fast racing, hopefully without much carnage. Other than a slightly injured park animal mowed down by an errant car

(it will recover completely) the only other spectacular moments both belonged to Jonathan Reimels . Not only did he become the first to completely leave the stadium/table but, in an amazing feat of acrobatic skill,  he also became the first to balance a car on its roof on top of a 1/2 inch wide foam barrier .

Soon the racing commenced with the Amateur SS group up first. It quickly became

Super Stocks line up to close out the season

obvious the fight for the win would be between the two band Joes as Paul Ryer and Dave Muse headed off into the distance. After 4 heats the result was Paul Ryer in 1st with 229 laps, Dave Muse in 2nd with 210 laps, Durf Hyson in 3rd with 186 laps, and Eric Handel in 4th with 179 laps. Now, three of the band Joes had a win apiece.

Pro SS had the look of a tough battle if the 1st heat was any indication. Erik Eckhardt led with 59 laps while both Paul Ryer (the Amateur bump) and Rob Hayes at 58. Tom Gray was also in with a 54 in gutter Yellow. Once Segment 4 was completed Tom Gray was the first to put up a number with a 226. Segment 5 had Jonathan Reimels finishing just behind Tom Gray with a 225. Next man to finish was Reimels the Greater. John posted a 229 to move into 1st place but it had become 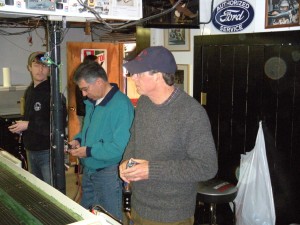 obvious that some of the band Joes were lurking backstage.

Segment 7 would see a complete revision of the leader board as all 4 of the band Joes pushed to the front, led by the swirly horn player. John Pileggi put on a virtuoso performance with a 256 lap total and an 18 lap win. 2nd went to the King, Rob Hayes with 238 laps. 3rd and 4th finished only sections apart on 235 laps as Paul Ryer had the measure of Erik Eckhardt. John Reimels was 5th with his 229, Tom Gray 6th with his 226 and Jonathan Reimels was 7th with his 225 total.

In the end the dueling band Joes carried the day as the winners. Dave Muse and Paul 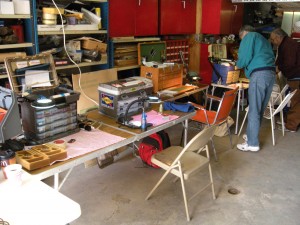 Packing up for the season...

A fun day of racing and the end to another fine season. Congratulations to all the newly crowned Champions. On a personal note , my thanks to all who attended and who made the day the fun it was .