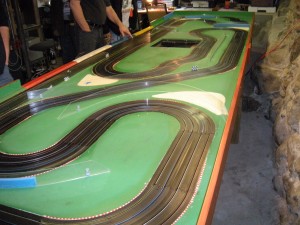 The Track is READY FOR ACTION

temperatures in the low 70s AND various Saint Patrick’s Day events being conducted throughout the area, how many folks would be attending the Lasagna Luncheon being hosted by Tom Bussmann?  To help entice folks, Tom was even willing to run a G-Jet and a Super Stock race for those inclined to play with toy cars.  The answer was 13 plus the host bringing the number of hungry eaters to 14.  With early morning help from Bill Bonsma, Schlitzerland Raceway was ready to rock and roll when racers started unpacking their gear at 8:00.  When the green light was activated at

8:30 for the start of an hour and a half’s worth of practice, all systems were go.  The track was a tad slippery until the slip-on tires started laying down some rubber – for the first hour of practice, frequent tire cleaning was a necessity!

Stez showed up with his usual array of lightening fast loaner cars much to the delight of Tom Kanan, Bill Bonsma, Tom Smith and Bruce Gordon.  Would these club cars prove to be competitive with the rest of the field?  As we were about to find out, yes!  With 14 racers in attendance, the field was broken up into two groups of 7 racers each.  First up were Tommy Gray, Eric Handel, Bill Craven (making his first appearance of 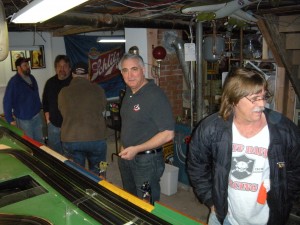 the season – better late than never), Vince Tamburo, Bill Bonsma, Benny Leyro and Tom Smith.  Bill Bonsma smoked the field with an impressive total of 186 laps ringing up top lap honors in every lane with smooth, consistent totals of 46 and 47 across the board – no gutter lane issues with Bill!  Vince Tamburo finished 2nd setting the pace for the amateur standings with a lap total of 179.  Benny Leyro followed in third with 166 laps followed by a tight scrum of folks for 4th; Bill Craven with 161, Tom Smith with 160 and Tom Gray with 159.  Eric Handel rounded out the field with 143. 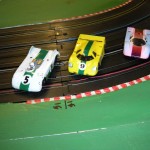 Tom Bussmann, Bruce Gordon and John “Turbo” O’Brien.  With Bruce and TK struggling a bit in yellow, Bill Bonsma was hopeful that his lap total from the first heat would stand up; he was wro 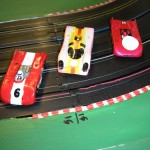 ng…  Once out of the yellow lane both Bruce and TK set a blistering pace of 48 and 49 laps per heat both besting Bill B’s total.  When the dust settled, TK beat Bruce by a lap – the difference being TK’s 45 laps in yellow versus Bruce’s 44…  Stez finished with a lap total of 178 followed by John Reimels at 177, Paul Ryer at 176, John O’Brien at 175 and Tom Bussmann at 165 (who was obviously concentrating more on the lasagna than on racing!!!).

With the G-Jet race now in the books, it was time for the main event – Lasagna!!!  (Let’s see, I can practice with my Super Stock or I can grab a plate of lasagna, mosey outside into the warm sunshine on Tom’s back deck and enjoy a fabulous meal.  As my profile shows, I opted for the food – JR).  When the last of the food was devoured, Super Stocks

started buzzing around the track in what remained of the 2 hour practice session.  With the departure of Stez, Bruce and Tom Smith, there were only 11 racers left to do battle.  First up were the Amateurs; Eric Handel, Benny Leyro, Tom Bussmann, Vince Tamburo, Paul Ryer, John Turbo O’Brien and Bill Craven.  Turbo was hoping for another masterful win to make it two in a row.  Host Tom Bussmann was hoping for another chance at the Pros having beaten them at Benny’s race last month.  Paul was hoping for a decent finish to cement his lead in the championship.  Eric was just hoping to finish having struggled throughout practice with a balky car.  Would all these wishes come true?  Tom Gray came to Eric’s rescue by loaning him his backup car.  And much to Turbo’s and Tom B’s disappointment, Paul did more than just get a decent finish, he won the event (sorry Turbo), set fastest lap and elected to move up to the Pros 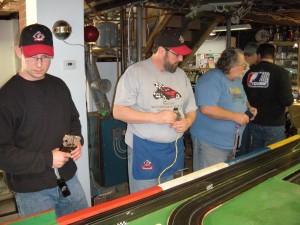 (sorry Tom) crushing their dreams…  When the power was turned off, Paul had amassed 289 laps with Tom B in second with 279, Turbo trailing in third with 275 and Vince at 267.  Bill Craven’s year long absence showed with his total of 238 and Eric did well with a borrowed car finishing with 211.  The worst luck had to be Benny’s when his car just wouldn’t run at the start of the race missing the entire first heat! 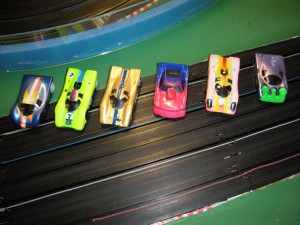 Tom Bussmann’s feat and make it two overall wins in a row for the amateurs?  Yes – Paul once again blew away the field with a dominating win beating his amateur lap total by an additional lap.  Tom Kanan finished second struggling in the center lanes while running fantastic in the gutter lanes – go figure…  TK beat Bill Bonsma by 6 sections so Bill had to settle for third.  John finished 4th with 266 laps and Tom Gray with 250 laps in fifth.

Thanks go to Tom Bussmann for hosting the event; he’s built himself a very challenging track in a very nice facility.

It’s that time of year when season points become very precious – with only two races remaining, there’s many podium spots up for grabs.  Don’t forget, to be eligible to vote at the rules meeting, you MUST make at least 4 events.  You don’t want to miss this meeting, it could be exciting…

Next up we’ll be at Tom Kanan’s TK Motorsports Park with F1 902 Production cars and Super Stocks on April 14th.  If the weather was this nice on March 17th, it’ll either be 80s in April or we’ll be a foot deep in snow…  let’s hope for the former.