Yonkers, New York, February 25, 2012 – Benny Leyro’s The Danger Zone was the place to be last Saturday.  MARC was running the second CMPM Modified race of its season and the combin 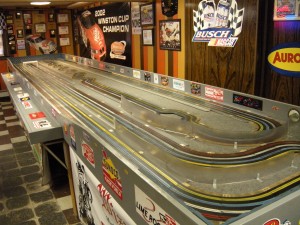 ation of Benny’s super fast track with the blistering speed of the Modifieds was a hard combination to beat even if it is hard to hold your breath for 5 minutes!  Extra special thanks go to Benny for hosting this event considering he had eye surgery on the Wednesday prior to the event!!!  Most folks would be lounging around in PJs watching TV whilst convalescing but not our Benny – he had a race to run!

As racers entered the facility, Benny had coffee brewing, donuts at the ready AND the track in perfect condition.  During the waning moments of the one hour practice session for the production based 902 class, nine racers were finalizing the set up on their cars when John “Turbo” O’Brien waltzed into the facility.  As the power to the track was being shut off, John mumbled something to the effect of, “Practice?  I don’t need no stinkin’ practice”…  As a further handicap, eagle eye tech inspector Paul Ryer found a loose winding on John’s armature so he had to borrow a car from the Reimels’ stable.  Not only

was he starting the race with virtually no practice time, he was going to race a car that he had never driven before.   With ten racers now in attendance, the field was broken into two groups of 5 racers each.  First up were track owner Benny Leyro followed by Rob Hayes, Paul Ryer and the Tom twins – Bussmann and Kanan.  Paul had built up a substantial lead going into the last heat but his handling went south when one of his front tires decided it was time to quit and left the premises.  This left the window open for Rob, Benny and TK to pounce on Paul’s misfortune.  As the clock ran out, the top four were within 1 ½ laps of each other with Rob squeaking out the victory and Paul barely holding on to second place.  They were followed by Benny, TK and Tom.  The second group consisted of the third Tom, Tommy Gray and Sam Ryer, Bill Bonsma, John Reimels and “Who Needs Practice” O’Brien.  While the lap times in this group were approximately 2 tenths of a second slower than the pace of the first group, the race was much cleaner with fewer “offs”.  By the end of the race, Bill Bonsma led all racers to take the victory but “No Practice Required” O’Brien pushed Bill hard for the victory finishing only one lap in arrears.  John Reimels and Tommy Gray finished 3rd and 4th in the heat, all mentioned beating the lap total set by Rob in the first heat – goes to show that fast laps don’t always win races!

With the 902 cars sitting in impound, track power was turned on for the start of a 2 hour practice session for the Modifieds.  Judging by the thrashing going on, it was clear that those who did not attend the NYCONN modified race at Benny’s a few weeks ago were behind the eight ball.  Turbo once again seemed confident; he had a fantastic race here on 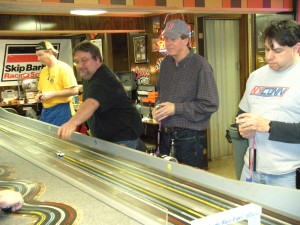 Jan 28th  and, with an additional 4 weeks of tweaking, he clearly had a top contender in his possession.  In the meanwhile, Inez, Benny’s wonderful wife, prepared quite a spread for lunch.  Those confident in their cars or those having given up entirely, were able to enjoy a relaxing meal before the start of the race.  Those not so confident spent the entire practice period swapping tires, magnets and armatures missing out on a fantastic meal.  As the countdown clock hit the 2 hour mark, cars were being scrutinized by the technical inspectors – nothing amiss was found.  Amateurs were up first with a field of five.  Would Turbo be the man to beat or would track owner Benny give him a run for the money?  Tom Bussmann was hoping to avenge his race 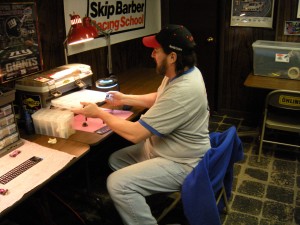 Why is this thing running so damn hot...

from last month when he had a bullet of a car but the misfortune of losing his pick-up shoe not once but twice.  Also in the fray was the father – son duo of Paul and Sam Ryer.  Once again Paul was struggling with excessive heat (god knows what he has under the hood – JR) and had to borrow a car from the Reimels’ stable – the car that Jonathan nearly melted down at the ECC.  Now equipped with shunts, the heat issue seemed to be under control but time would tell…  When the green flag dropped, Turbo took off and ran away from the field.  He managed to better the 70 lap mark in all four lanes – the only other racer to beat that mark in any lane was Benny when he ran blue.  Tom tried to push Turbo but, while he clearly had the second best car, he was

no match for Turbo.  Benny managed a third place, eye surgery and all, with Paul Ryer a nice “cool” fourth (shunts worked! – JR).  Sam, running a BSRT 911, finished up fifth.  With Turbo declining the move up to the Pro race, Tom Bussmann jumped at the chance to run again.  He joined Bill Bonsma, Rob Hayes, Tom Gray, TK and John Reimels in the final race of the day.  Tom B, TK and Bill led the field in a tight battle for the top spot while Rob, John and Tom G were left scratching their heads trying to figure out how to drive these buggers.  Clearly the NYCONN crowd has these cars dialed-in!  When the race was over , Tom Bussmann managed the win by two laps over Bill Bonsma with TK only sections behind Bill.  Nobody could match Turbo’s lap total from the Amateur race giving him the overall victory.  Turbo beat last month’s NYCONN victor’s lap total by 16 laps!  Wow…

Congratulations to Turbo for sweeping the Amateur events and Bill Bonsma for sweeping in Pro. Extra congrats to Turbo for the overall win in Modifieds – sweet drive.  Thanks to Benny for hosting this event, the facility was in top notch shape and the food, as always, was delicious.