MARC Shares Billing with the ECC

Suffield, Connecticut, February 4, 2012 – Twenty racers made it to TajMaHO only to l 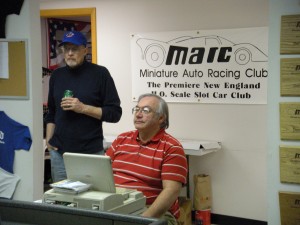 earn that their host, Dan DiCosmo would not be racing with them that day.  Dan had a last minute schedule change so he graciously opened his door to us while he departed for a show – what a guy…  The race day promised to be busy as we were not only running two races for MARC but a third race for the East Coast Championship (ECC) to be contested with Compression Molded Polymer Magnet (CMPM) Modifieds.

While practice was underway for the Modifieds on the Scorpion, the first event of the day kicked off on the Clubman track – Lexan bodied G-Jets.  With 18 participants, the field was broken up into two round robins of 9 drivers each.  Erik Eckhardt, with a rocket ship borrowed from Durf Hyson’s stable, blistered the field in the first round robin with a 10 lap victory over second place – a huge margin in the usually close racing that the G-Jet platform yields.  Stez had a tough heat when marshalling damage dislodged his body (well, not HIS body, but the body of his car…), by the time the situation was rectified, his chance at victory had evaporated.  Rob Hayes led the second round robin with an impressive run but he too fell short of toppling Erik from the top podium spot.  Vince Tamburo ran an excellent race to grab the top spot in the amateur division pushing Paul Ryer into second place.  The biggest disappointment of the event had to be Ryan Archambault’s DSQ; after a spectacular run that would have garnished him the top spot in amateur and 4th overall, it was discovered he was using last year’s silicone sponge tires, not this year’s required slip-on tires (As a tech inspector, I should have caught the mistake in pre race inspection; sorry Ryan – JR), expect to see Ryan battling for top honors in future events!  All of this action was occurring while the CMPM Modifieds were still buzzing around the Scorpion practicing for the ECC feature race.

With the MARC race positions frozen, the top eight finishers participating in the G-Jet ECC race freshened up their cars for two 5 minute mains.  While Erik once again showed he was the man to beat, this time both Rob and John kept Erik honest by pushing him for the entire race.  The top four finishers were an interesting group, all having participated as a team in the recent 24 Hour LeMans race in Derby, England.  Too bad G-Jets aren’t used for this event…

Next up were the CMPM Modifieds.  While a few participants decided to sit this race out, we had Wayne Wallace and Victor Feliciano join the fray bringing the field up to 13. 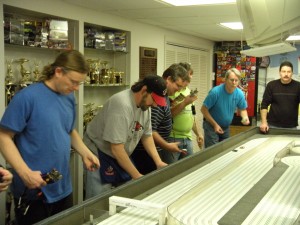 Three minute qualifiers were run to narrow the field to the top 6 so a 5 minute main could be conducted for the championship.   With the typical carnage that this class generates, especially on a tight, 6 lane track like the Scorpion, the runaway “victor” was none other than Victor Feliciano.  Pushing Victor was Rob Hayes, John Pileggi, Wayne, TK and Bill Bonsma but none could match the speed and reliability of Victor’s car.  (I don’t have official results, if someone could send me the finishing order, I’ll post here – JR). 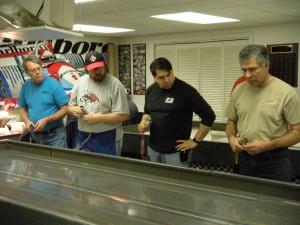 As the heat was dissipating from the CMPM Modified race (literally…), Super Stocks were running on the Clubman for the second MARC event of the day.  Dan was able to make it back in time to participate bringing the field up to 17 racers; 6 Amateurs and 11 Pros.  The amateurs took to the track first with Dave Muse breaking away from the field giving the other participants a true thumping!  Paul Ryer tried to stay with Dave but he just didn’t have the horses to compete.

With 11 Pros, the field was broken up into 2 round robins; John Pileggi continued his dominance of this class racking up 351 laps to Dan’s 339 and Jonathan Reimels’ 336.  Dr P has won 9 of the last 12 Super Stock races that he’s participated in – true superiority.

Since the day was already getting pretty long, the Super Stock mains for the ECC were cut 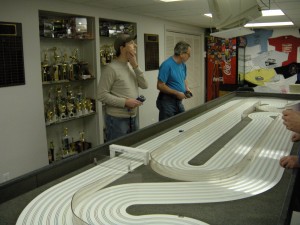 back to 3 minutes.  Having shaken off the cobwebs in the MARC event, Dan DiCosmo was now ready to take on the field and show them what home field advantage is all about.  Would Dr P’s Super Stock magic last for another race?  As everyone was soon to learn – no…

go out to Dan for hosting this fantastic event, even when he was absent!  Rumors continue to circulate that this could be the last ECC event hosted at the TajMaHO, a facility that we will all truly miss.

Next Up – CMPM Modifieds and 902s at Benny Leyro’s The Danger Zone on Saturday, February 25th