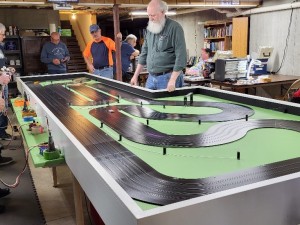 ’Twas a crisp fall day in Rochester NH, and 14 racers were in the house for the first official MARC race at this venue. A shakedown event had been held last year. This track is an original Max that long predates Paul Kniffen’s acquisition of the company. It was first owned by Rob Hayes, and many MARC races were run on it at Catfish. Then Dave Muse acquired it but didn’t have a suitable place to set it up. Thanks to both for making it available to me. The track is high downforce, and VERY low rail.

The long distance award goes to Dan DeCosmo, who made the trip out from California specifically for the purpose of attending this race. Well okay, not really, but he did extend his stay by a day so he could be here. It was good to have him in the house.

Racers were greeted with donuts and coffee. Plus Ryan brought some cookies of which he was not terribly fond, and was looking for help in consuming them.

The first race of the day was Spec Racer. After two-plus hours of practice, amateurs and pros jointly took to the track to test their set-ups.

When the dust settled in the Sportsman race, only four sections separated first and second place. Terry Ayer nipped Hakim Harris by a tiny margin. The complete results follow: 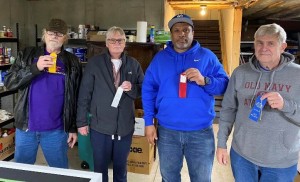 On the Pro side, track owner John Pileggi was prepared for the competition and won handily with 392 laps. The yellow lane here is no gutter, but rather probably the fastest lane on the track. Here are the results:

Next came lunch with a nice variety of pizzas as usual. Following lunch, practice commenced for Super Stock. Will the winning lap totals exceed those of spec racer, or fall short? Time will tell…

Six Sportsmen battled in this class, with newcomer Bruce Olsen taking the victory with 292.23 laps. Terry Ayer, the victor in spec racer, came in second only three laps behind. 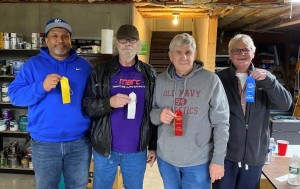 The Pros race saw John Pileggi pull down an even more convincing win with a 37 lap margin of victory over Ryan Archambault. Dan DeCosmo might have finished second, except his body decided to leave its chassis at one point. 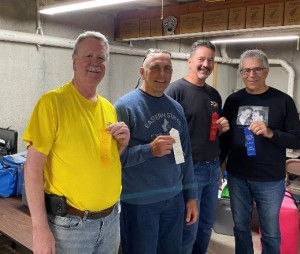 So on the Sportsman side, the winning lap total in Spec Racer exceeded the Super Stock total by an incredible 43 laps! On the Pro side, the margin was only one lap. It’s interesting to note that even though the Spec Racer cars are limited to a 23 tooth crown gear and slip-on tires, the majority of the racers turned higher lap totals with these cars than with the Super Stock set-ups. The increased downforce of the Spec Racer cars is undoubtedly the main reason for this result. 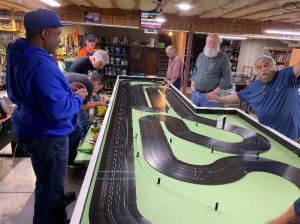 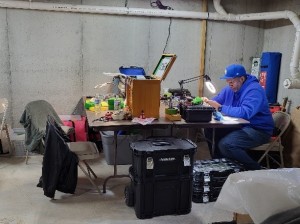 Hakim won the award for having the most impressive pit equipment

Thanks to all who attended, and helped make this day a great success!

The next MARC race is scheduled for November 12th at LenJet. Hope to seeyou there. 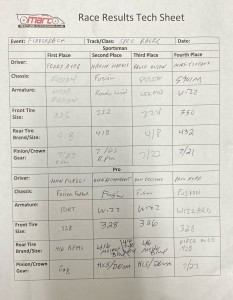 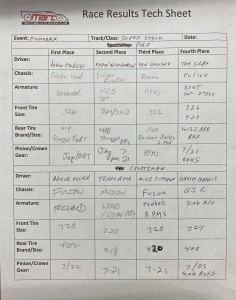