The Miniature Auto Racing Club of New England (MARC) began its epic, 43rd season in the wide open spaces of LenJet, the golden Mecca of HO slot car racing. If you haven’t been, well, you just haven’t been.  Everyone is welcome, so come on down!

Our new club director, Tom Gray, offered welcome to the 16 racers who’d come in to renew the struggle, and then made presentation of the plaques to the top finishers from the previous year’s campaign.  There was jocularity, and a fair amount of bonhomie. 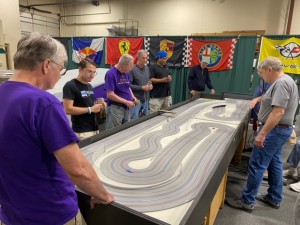 Race one of the day was for Spec Racer cars, on Steve Medanic’s The Bear course.  Tight!  The Sportsmen and the Pros were mixed together, in round robin format, and using European rotation.

Ever-popular Sportsman Bruce Olsen stepped out early, with a remarkably fast car, and was going to set the pace for his fellow Sportsmen, and probably some of the Pros, from the look of it.  Pro Ryan “Magneto” Archambault arrived just in time to join the end of the round-robin field.  His hurt (right) paw is a source of both pain and serious concern.  Several of the other, always thoughtful, Pros were heard to offer on-site surgery via flame-sterilized X-Acto and cups of Bulleit Bourbon.  However, Ryan seems to be holding out for more professional care.  Good move.

This was the first race of the season, and there was definitely some rusty, borderline inattentive, corner marshaling.  Everyone:  take a deep breath, please keep your eyes on your corner, and work to get cars back in without creating additional deslots for racers coming up behind.  We must all do better, and I know that we will!

After a lot of thrashing about, and quite a few track calls for cars on the floor, the race shook out like this:  Dr. John Pileggi (Fusion) took the top spot by seven laps over Rob Hayes (G3RS), who was followed by Nick Kanan, and Old Busted Paw, both of them with Fusions.  Bruce Olsen came fifth overall, and first Sportsman, also with a Fusion. The top four Sportsmen were all running Fusions.

Top four places in both Sportsman and Pro are the subject of a tech sheet elsewhere in the report.  The entire field, with their overall and lane-specific lap totals, can also be found here someplace.

After the traditional noontime, four-course meal, everyone set to preparing machinery and fingers for their respective next contests.  For the Sportsmen, it was Formula 1 G-Jets on the historic Car Model track.  And for the Pros, Compression Molded Polymer Modified on the lightning-quick Boomerang! 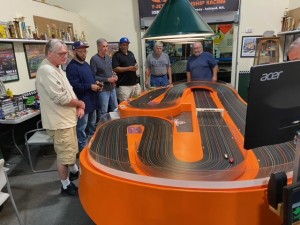 Open-wheel G-Jets for the Sportsmen?  Oh yes.  Seven contestants stepped up, and it was New Hampshire favorite son Terry Ayer with a convincing, 10-lap win over Digital Dave Muse on the quirky Car Model bowl.  Oh Jimmy Colligan came third, and Hal Pierce, surely one of the kindest slot car racers in the Lower 48, was fourth.  Everyone ran… a BSRT G-Jet.  So, no tech sheet for this one. 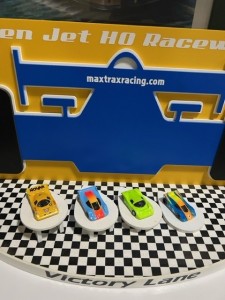 CMPM Pros: Ryan goes mellow yellow; Nick sticks with the blue and passion fruit; Pileggi with his DeCosmo livery; and Ryer with a blue, guava, and lemon scheme.

And then CMPM on the Boomerang, for the Pros.  Somehow, Old Busted Paw conquered the pain and numbness in his right hand, flying off to an 11-lap victory, over Nick “Footlights” Kanan, who ran a Stiff G3RS.  You could say that Ryan (Viper Medium) won this race on gutter Yellow, but he was equally impressive on all four lanes.  This performance showed guts, and perhaps a willful disregard for one’s health.  8-)  Dr. John was third with a Stiff G3RS, twelve laps behind Nick, and newly minted HOPRA Senator Paul Ryer came in fourth, also with a Stiff G3RS.  There is tech sheet elsewhere in the report, if you really feel the need to geek out.

And that was it for Race One of 2022 – 2023.  Good fun, and it was swell to see everyone, after the summer had packed its sand buckets and beach chair into the Subaru.  Our next tilt will be at John Pileggi’s place in Rochester, New Hampshire, on Saturday, October 8.  61 Fiddlehead Lane.  The course will be the black, ex-Catfish MaxTrax, though now featuring some truly superb updates.

Over and out for now,