New Milford, Connecticut, Jan. 14, 2012 – As a cold and blustery dawn was breaking over the western Connecticut landscape, 14 racers were making their way to New Milford, 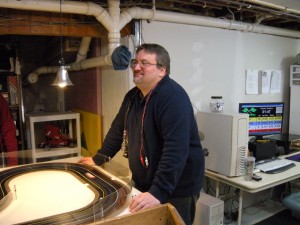 CT for MARC’s first event at Bill Bonsma’s Mighty Atlas Raceway.  The layout was in fantastic shape, hard to believe the track sections used in its construction were probably manufactured 50 years ago – but, as I keep telling anyone who’ll listen, everything gets better with age…  The MARC regulars were joined by the NYCONN crowd for the second joint race of the season.

First up were open wheel 902 Production cars.  The group was ra 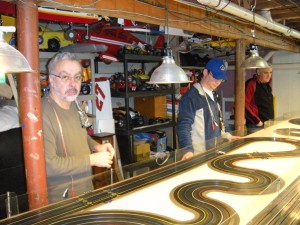 ndomly broken up into two round robins with the overall results a compilation of the individual heats.  Bill Bonsma scorched the first heat participants with a lap total of 293 laps, a margin of 15 laps over second place – even more amazing considering he had one bad heat when his body decided to depart from the chassis after a particularly tough hit!  In heat one, Bill was followed by Wayne Wallace, John Stezelecki and Tom Gray.  Heat two participants lined up hopeful they could take advantage of the opening Bill gave them thanks to his body mishap.   Unfortunately for them, no one could touch Bill’s t

otal, loss of body or not.  The closest was Don “Mustard” Counts with a lap total of 281; while 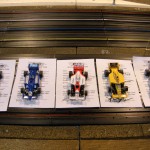 this wasn’t good enough to topple Bill from the top spot in the Pro division, it was good enough to garnish him second overall and the Amateur first place laurels.  In heat two, Mustard was followed by Rob Hayes, John “Turbo” O’Brien and Tom Kanan.

Next up was MARC’s favorite class, ceramic magnet Super Stocks.  While the guide pin depth on the Atlas track might have been a tad shallow, the size of the rail certainly wasn’t 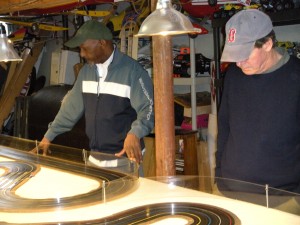 lacking – once again racers were faced with the classic dilemma of magnet car racing – run low and generate tons of heat or run high and sacrifice handling…   As practice time was running out, the pressure to find the perfect setup increased; pyrometer readings and crossed fingers critical factors in tire choice.   With the early departure of Stez, Bruce and Tom B  due to outside conflicts, 12 racers were left to do battle – four in Amateur and eight in Pro.

First up were the amateurs and right from the drop of the green, Turbo and Mustard set 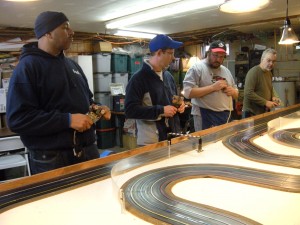 the tone for the race – they were having a real knockdown, drag out brawl for first until the final “heat” when Mustard’s car finally gave up the ghost in a trail of smoke.  This allowed Turbo to waltz into victory circle and opened the door for Paul Ryer to grab second.  Mustard was able to salvage 3rd with Vince Tamburo trailing in 4th.  As the smoke cleared from Mustard’s car, some Pro’s were questioning their tire choice.  Was Mustard’s meltdown a preview of things to come?

As winner of the amateur race, Turbo elected to run again with the Pros bringing the field 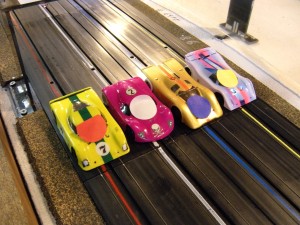 up to 9 drivers.  Rob Hayes clearly nailed the setup perfectly has he blitzed the field racking up a 7 lap margin of victory.  Second place wasn’t as obvious with Tom Kanan and John Reimels running similar lap totals until Tom encountered issues with the lead-on in the red lane allowing John to grab second by 2 sections.  Wayne Wallace finished fourth followed by Tom Gray in fifth.  Bill Bonsma was hoping to replicate his earlier magic as 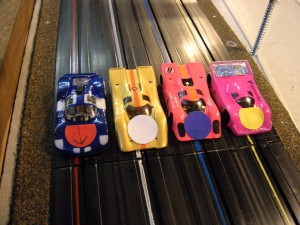 he appeared to have something for Rob early on.  Then things started to “heat up”; after two armature changes all he could manage was 9th place, 50 laps out of 8th…  ouch, not finishing position he was hoping the home field advantage would give him.

Thanks goes out to Bill for hosting such a wonderful event.  While this might have been MARC’s first venture out to New Milford, hopefully it won’t be the last.  Tip o’the hat for a wonderful breakfast and lunch spread.