Team Catfish G-Jets Triumph in both Sportsman and Pro;

Terry and JP Ascend the Top Steps in Open Weight

The car classes chosen for what was intended to be the long-awaited 25th Anniversary of Cambridge’s Catfish International Speedway were instead contested in the wide open spaces of LenJet, for reasons of virology.

We are hoping that, come this September, the world health situation will be such that we can well and truly celebrate this milestone in the cozy confines of Catfish International.  Look for music, raffles, and lots of cool stuff that may have you making the trek.

Slo-Cars:  they’re a different thing.  Thanks to all who showed up to chase the checkered flag.

The MaxTrax Python was the course selected for the BSRT G-Jets, first race of the day.  Historic Can-Am bodies, with drivers and interiors, made this a little different, offered some additional visual interest.  Some extra rail, and an even surface made this an ideal layout to really push these cars. 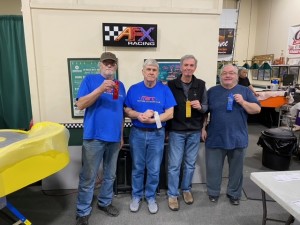 In the Sportsman program, after much cajoling, haranguing, debate and pressure, Digital Dave Muse, with no running racecar, agreed (finally) to borrow Catfish Sr.’s backup G-Jet.  He then quickly proceeded to walk the race, taking the top step of the podium by nearly nine laps from Nitro Mike Tiffany.  At the conclusion, Dave was sporting a wide grin, almost in spite of himself.  Very, Very Good To See!

Terry Ayer was third, two laps behind Mike, and Hal Pierce was three behind Terry.  Bruce Olsen and Hakim Harris were there too, but decidedly, and uncharacteristically, off the pace on this day.  Hakim had also started out the day with a Team Catfish car, but it came down with a bad case of commutator-oiling on the starting grid, and was replaced with a car from another quarter. 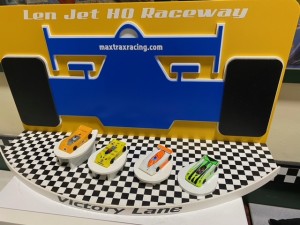 On the Pro side, Rob Hayes was out to “redress” the result of the previous MARC G-Jet race, in which one Ryan (Magneto) Archambault had bested him in his favorite class, on the Boomerang.  This unfortunate, nseemly history would not repeat itself on the day.  Hayes unveiled a long-wheelbase, McLaren M20-bodied machine that had the full measure of the field, taking it to a nearly six-lap win over Ryan.  Dr. John Pileggi finished four behind Ryan, and Peter Lentros, Tom Jahl, and an audibly frustrated Paul Ryer, completed the Pro field.

Our second race of the day, Open Weighted, was situated on the beloved Shamrock Glen, which, as you’ll notice, has only one n in its name.

The Glen is truly beloved for all of the slower classes we race.  For my money, it is one of the very best courses that Mr. Brad Bowman has created in his storied career.

Open Weighted, or Open Weight, is not a diet program, nor is it the name of a smorgasbord.  Open Weight cars, are, in essence, HOPRA Spec Racer cars, sans traction magnets, and powered in a band of between 12 and 14 volts.  Big fun, and at speeds one can follow. 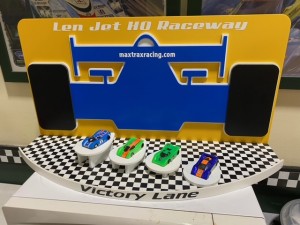 We lost our most intrepid racer, Nitro Mike Tiffany, from the second program, so it was five Sportsmen that bellied up to the Glen.  Suddenly, and without warning, Tyco Terry Ayer keelhauled and butch-slapped the field, pulling steadily away, and taking top lap total on every lane in the process.  Impressive win, indeed.  So steady.  On rails.

Hakim Harris continued his meteoric rise, and return to prominence after a decade away from HO racing, posting race-best fastest laps on three of the lanes.  He finished with a strong second place, though 13 laps in arrears of the streaking (but not nakedly) Terry.  Hal Pierce was a mere two laps behind Hakim.  Dave Muse, falling back to earth a bit, was fourth, and Bruce Olsen, not showing this usual pace this day, rounded out the field. 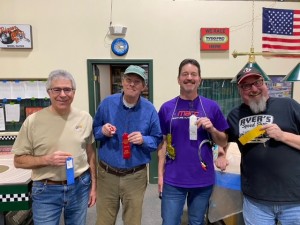 Pro Open Weight.  About eight laps covered the top four finishers, and it was as fraught, and intense, as that would indicate.  Catfish Sr. looked strong early, totaling a race-best 63 on Yellow.  But after his sit-out, came back (on Red) to a now-greasy track.  And Viper Albino rears, for all of their wonderful properties, don’t like an oily surface.  So, Dr. John Pileggi, who had wisely chosen BSRT rubber (how bloody ironic), squeaked out a classy, half-lap victory over Rob!

Ryan had his usual astonishing car, and posted top total on the Red lane, but he was just a slight touch teetery on the other three, and came third.  Our beloved Club Director, Paul Ryer, had a much more typical (for him) showing in Open Weight, and was right there, just over a lap behind Ryan.  Peter Lentros, who has been more than a little preoccupied with his work life lately, was fifth, and Tom Jahl, steadily feeling this way back into the pack, was sixth.

So there you go.  A fine day with the slower cars.  We have one more 2021-2022 MARC date on the calendar, on May 14.  Which just happens to be National Chimichanga Day!  No, I made that up.  Those of you desperately hoping to see Peter Lentros and Paul Crosby in matching sombreros will just have to wait.  Maybe forever.

Our Sportsmen will be running Spec Racer on the one and only Purple Mile, and Super Stock on (wait for it) the Nuvolari!  And our Pros?  They will be smokin’ armatures and de-laminating tires, in CMPM on the Boomerang, and NEO on the Brystal Viper.

And then (and then) LenJet and MARC will be hosting the 47th Annual HOPRA Nationals, June 21-25.  Wow!  Five days of spectacle, sleeplessness, poor grammar, substandard hygiene, occasionally rude behavior, completely obsessive slot car building and possibly superhuman slot car driving, here in the gilded palace of HO racing.  Come one, come all, and bring your best self.  Right now, this is the Super Bowl.  You can sleep when you’re dead.

Submitted this day, by Your Obedient Servant,