Weather was not an issue this day, unlike the last race, and 20 racers made their way to LenJet to continue their prep for the upcoming HOPRA Nats. The crowd was equally split with ten Pros and ten Sportsmen. There were two additional MARC drivers on site this day, Rob Hayes and Paul Ryer, who chose to compete in the 1/24 Retro competition, being held concurrently on the Modelville Hobby side. With Paul unable to carry out his normal responsibilities of running the festivities, others of us pitched in to make things happen.

The first races of the day were Super Stock for all – Sportsmen on the Python and Pros on the Bear, with the races running concurrently. 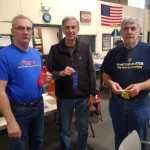 In the Sportsman Class on the Python, Hal Pierce pulled down the win with 355 laps. Tom Bussmann secured the second spot with 349 laps, followed by Terry Ayer in third with 346, and O’Jimmy Colligan in fourth with 325. 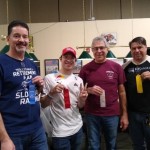 On the Pro side, Ryan Archambault continued his winning ways, rolling up 374 laps on the Bear. After his opening 100 laps on the red lane, I thought a 400+ lap total was a strong possibility. Ryan was followed by Nick Kanan with 364, John Pileggi with 352, and (senior) Tom Kanan with 351.

Next came lunch with a nice variety of pizzas as usual, including Hawaiian. Following lunch, practice commenced for the second races of the day. The Sportsmen would run Modified on the Scorpion, and the Pros CMPM on the Boomerang. 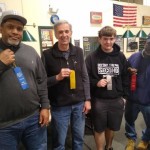 The Sportsmen only practiced for approximately one hour and were then ready to race. Only five racers participated, so they decided to run just five of the Scorpion’s six lanes; the yellow lane was omitted. Hakim Harris, who raced with MARC several years ago, has made a reappearance as of late. It hasn’t taken him long to ascend the podium. Hakim convincingly won the Modified race with 488 laps, followed by veteran Wayne Wallace with 475. Cody Pare followed in third place with 462 laps, Hal Pierce in fourth with 424, and Terry Ayer in fifth with 408. 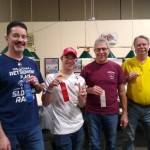 The Pros once again tried to figure out CMPM on the challenging Boomerang. The Sportsmen were done with their race before the Pros started, so Hakim joined the Pros to run CMPM. The finishing order for this race looked quite similar to the Super Stock race. Once again, Ryan showed us the way with 367 laps, making it a double win for the day! Nick finished second again with 353, John was third again with 335, and Tom Gray rounded out the podium with 322. Tom Kanan’s car was not cooperating, so he pulled it after 41 laps so as to not negatively impact the other drivers. This is a great example of unselfish sportsmanship.

Thanks to Ryan, Terry, and others who helped make the day a success.

The next MARC race is scheduled for April 9th, once again at LenJet. Thanks to Peter Lentros for providing such an awesome venue!

Okay, that’s it for now. I have to go put another coat of wax on my Super Stock bodies.