Despite a threatening winter storm, 21 racers were in attendance for the March 12th race at LenJet. Eight out-of-town MAHOPRA racers were there to practice for the upcoming HOPRA Nats in June. One of the MAHOPRA guests had never been to LenJet and remarked, “It’s the Disney World of slot car racing”. Thanks to Peter Lentros for having such a great facility.

The original schedule had the Pros running Super Stock on the Bear and CMPM on the Boomerang. Sportsmen were to run Super Stock on the Champion and Spec Racers on the Purple Mile. However, since only six Sportsmen were running Spec Racers the race was moved to the smaller, and more easily marshaled, Champion. The Sportsman and Pro races were run concurrently, since folks were worried about getting home through the ugly weather that was on the way. 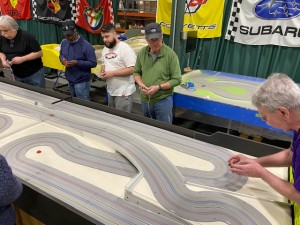 Pros battling it out on the Bear

Pros were on the Bear racecourse, running their Super Stocks. Roger Porcelli took the checkered flag with 386 laps. Taking second Rob Hayes with 356 laps, followed by Ryan Archambault with 353 laps, and in fourth it was Wayne Wallace with 352. 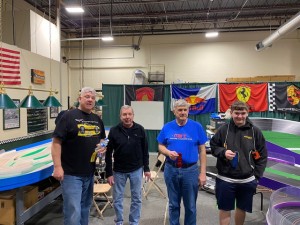 Sportsmen raced their Super Stocks on the Champion layout. Cody Pare set a blistering pace, racking up 335 laps for the win. He was followed by Terry Ayer with 320, Jim Colligan with 319, and in fourth it was Bob Zelano with 318.

Our traditional MARC pizza lunch came just on time once more, with many thanks to Rich for getting us fed and ready to race through the afternoon. 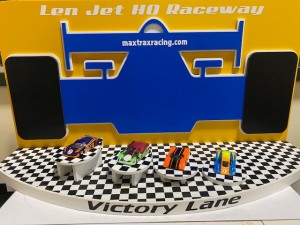 After tuning up the CMPMs to find the optimum ride height for the Boomerang, the Pros took each other on. Again, Roger Porcelli finished first with an incredible 375 laps, Jonathan Feliciano was second with 348, Victor Feliciano took third with 339, and Paul Ryer was fourth with 331. Ryan Archambault had spent much of his setup time trying to control a car that had — unbeknownst to him — a double 37 wind in it! Wham!!! 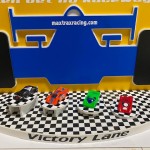 Concurrently, the Sportsmen ran the Champion for the second time on this day; this time with Spec Racers. Thanks to Peter Lentros for helping out with marshaling duties. Cody Pare set the pace with 336 laps for the win. You may notice that this is one lap more than his Super Stock win. He was followed by Terry Ayer with 328 (eight more than SS), Jim Colligan with 323, and in fourth was Hal Pierce with 317. 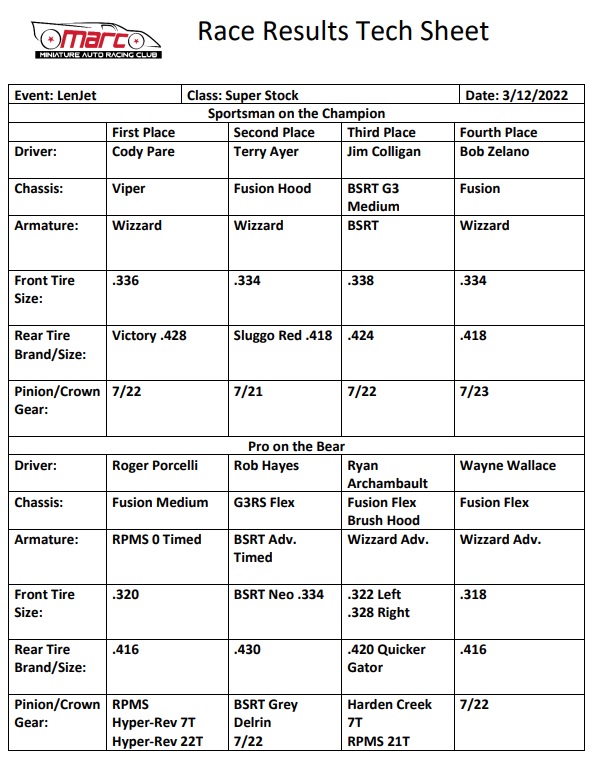 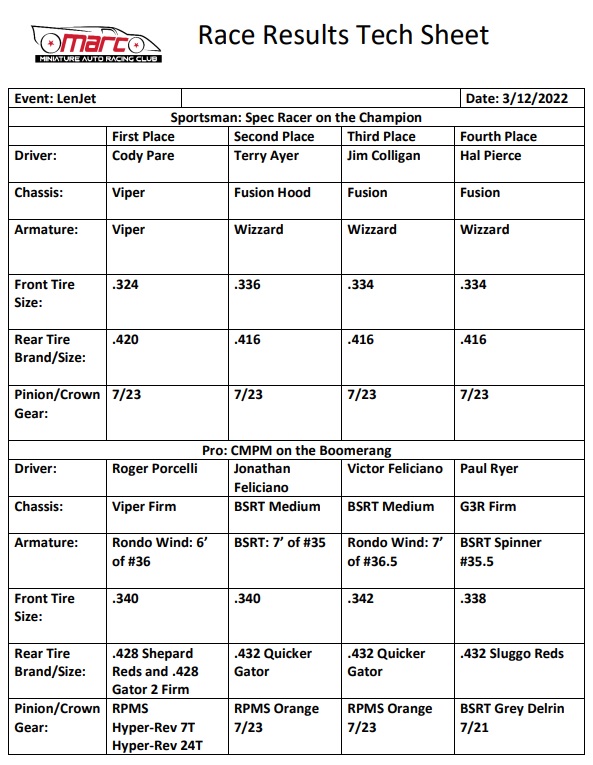 Until next time race fans, keep the pin in the slot and the shiny side up.