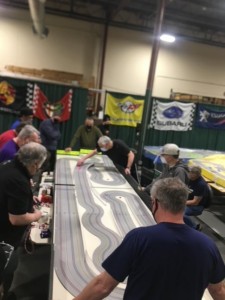 Lenjet had a great turnout for the February race with out-of-town racers attending from New Jersey, New York and beyond making a stop in prep for this year’s HOPRA Nats.

Up first …Super Stock on the TKO Bear - Would it be a Teddy Bear or a Grizzly?

Seventeen took to the TKO track with HOPRA super stock cars for practice to find the right setup and learn the track.  The track was fast but yet had enough surprises to keep the racers and Marshalls on high alert. In the round robin racing a combination of pros and sportsman raced together. We had a good variety of manufacturers represented with Gs, Vipers and Fusions in the mix.

Was the Bear tamed? Not completely.  Is it a teddy Bear? No …not that soft and easy. Grizzly? Probably more like a Panda …kind of adorable to look at but don’t piss it off!! It can and will kick your ass. 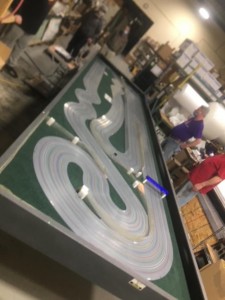 Next up was the MARC Sportsman running Modifieds on the brutal white Scorpion 6 lane track. This is a support class for the 2022 Nats open to sportsman and pros.  With that some of the pros asked if they could join the sportsman to get some track time. The sportsman agreed to let them run but would not change their finishing order. Thanks guys it made for some great racing.

After the Traditional pizza lunch 9 brave drop in neo racers took to the 6 lane Brystal Viper track (assisted by sportsman Bruce as a volunteer Marshall Thank you Bruce !!) as it was getting later in the day decision was made to limit the race from our usual 5 minutes per lane to 3.

It was apparent that the open track time some do the racers had taken advantage of Friday night to prep find setup and practice paid off. Race was a wild one with many racers having their share of problems and some not quite having the setup to get around the track as well as they would have liked. Taking down the top spot was long time MARC racer Rob Hayes with 424, second was a hard charging Jonathan narrowly missing a “triple” for the day with 422 laps, Victor 3rd 409, Greg B 4th 403, Tom Gray 392, Peter 384, Ryan 375, Brian 365, Tom Bussmann 294.

Quick shout out to everyone that helped keep the day moving, especially Dave Muse, Greg B and Terry thanks for helping setup and run races.

Bigger thanks to Peter for such a great place to race …and the new air filtration system not only keeping us healthy but keeping the tracks way cleaner than in the past.

Till next time… keep it in the slot