Ashland Massachusetts, November 13, 2021 – In spite of an ominous weather 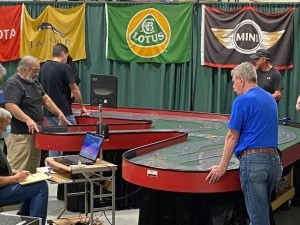 Racing on the Boomerang

forecast, 18 intrepid racers showed up at Lenjet with racing on their minds. As it turned out the weather was of no consequence, ending before we did. A good thing too because it sure did rain (We had to turn the sound up on the computer because the rain on the steel roof of LenJet was so loud)!

Sportsman Open Weight -It was obvious early on that Tom Bussmann was going to set the pace on the smooth, flowing Champion. Several other drivers

showed good pace though and it looked to be an interesting race (Fast laps were just under 4.5 seconds). Mr. Bussmann promptly scampered into the lead early on, winning the first three heats handily. Only in yellow did he slip, recording one less lap than Terry Ayer who finished in second place overall. Cody Pare in third and Bruce Olson in fourth rounded out the podium.

Pro Open Weight -Nobody seemed to have a clear advantage in practice, and it became 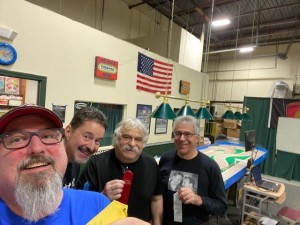 clear that this race was going to be decided on setup and consistency. Both Peter Lentros and Paul Ryer recorded some pretty amazing laps – Ryer ran a 3.643 in gutter red and Lentros managed a 3.518 in blue (Those might have been riders.  Fast laps overall were right around 4 seconds). In the end though, nobody could match the pace of Ryan Archambault who finished in first with 265 laps, followed by John Pileggi with 253 laps. Peter Lentros in third and Paul Ryer in fourth completed the podium.

As usual, Modelville Hobby’s Rich Payne was on top of things and made sure pizza arrived to fuel the afternoon of practice and racing. Everybody moved over to the Boomerang to get their setup for Spec Racer. 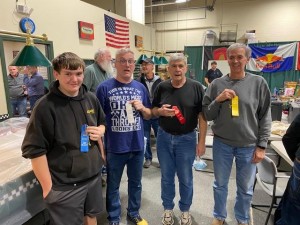 Sportsman Spec Racer - Looking at the lap times it’s pretty clear who dominated the race (Fast laps were just under 4 seconds). Cody Pare finished atop the podium with 262 laps, 15 laps ahead of Terry Ayer with 247. Third and fourth place went to Tom Bussmann and Hal Pierce. 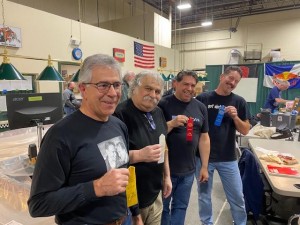 you better have the setup and you’d better be consistent (Fast laps were just over 3.5 seconds). Nobody recognized that better than Ryan Archambalt who recorded 303 laps on his way to victory. MAHOPRA’S Tom Kanan recorded 296 laps, Peter Lentros took third with 284 laps and John Pileggi finished fourth with 283. Close race there.

As always, fast close racing.  Many thanks to all who made it possible and especially Peter Lentros. See you next month back at LenJet.  The host is Peter Lentros and we will be racing Spec Racer on the Scorpion.  Sportsman will then run Super Stock on the Champion and the Pros will be racing CMPM on the Viper.  Hope to see you there!