Calling Elvis, Is Anybody Home?

Hingham, Massachusetts, December 10, 2011 – Yes, yes there is.  Sporting some fresh paint, Elvis is now appearing at the South Shore Speedway in Hingham Massachusetts.  Thanks go out to everybody who made this possible from the original designers and

builders to the guys who donated equipment and man power to move and set the track up.  Hopefully this is the first of many MARC events to come.  Elvis is back in the MARC lineup.

The doors opened at 8 A.M. and the drivers started rolling in.  Many MARC regulars were on hand as well as some new faces and one from the past.  Jim Macartney, part of the team that designed and built Elvis, joined us for the inaugural race.  Jim was kind enough to donate some of the original track and table designs from when it was originally built along with some pictures of the build

up.  Thank you Jim!  We’ll get the pictures on the website soon.  By the time of the first race there were 18 drivers ready to take on the King.

First up was G-Jets.  To mix things up a bit the usually swoopy bodies were ditched in favor of some NASCAR bodies – Lexan of course.  A slick looking field of 18 cars was randomly divided into 2 groups of 9 and the racing began.

Racing was fast with lap times right around 5 seconds.  In the first race Jonathan Reimels hammered out 258 laps followed by Mike Resnick with 241 and Paul “What happened to 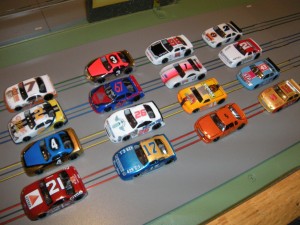 home field advantage?” Ryer with 238.  “What’s up” Chuck Turner, Sam “Dad told me to practice more” Ryer, Tom Gray, Jim “The Designer” Macartney, Don Hall, and Eric Handel rounded out the rest of the field.  At the end of race one, Jonathan was in first place for the Pros and Mike in first for the Amateurs, but would it hold up?

In race 2 many of the heavy hitters were up.  Senior Reimels, Rob Hayes, and John “The Doctor” Pileggi were looking to knock Jonathan out of the top spot.  When the checkered flag dropped it was John Reimels doing the donuts in the infield (South Shore Speedway will be sending him a bill for the grass repair).  Sr. Reimels put up 259 laps beating Jr. by less than a lap.  John “Mr. G-Jet” Stezelecki finished with 255 followed by 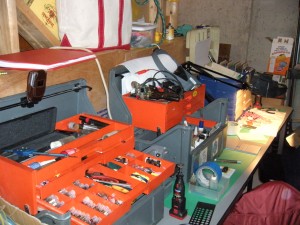 In Pro the top finishers were John Reimels first, Jonathan Reimels second, Stez in third and Rob Hayes in fourth.  During tech it was pointed out to Dave Muse he was using the heavy front weight.  At the last minute he decided to swap it out for a standard weight, he was glad he did because his 243 laps put him in first for the Amateurs followed by Mike Resnick is second, Paul Ryer in third and Vince Tamburo in fourth.  Excellent racing by all drivers! 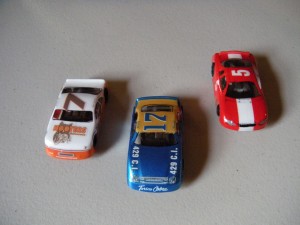 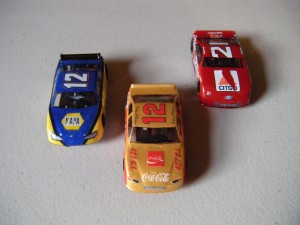 While the second G-Jet race was finishing up and practice for second race started, a lunch fit for Elvis was laid out by the South Shore Speedway catering service AKA Mrs. Ryer (Thank you Susan).  Honey baked ham and turkey, baked beans (a dangerous choice), potato salad and corn bread.  Susan Hyson (AKA Mrs. Durf) was kind enough to send over a spread of Christmas goodies, an assortment of cookies and pumpkin bread.  The feast was on!  All part of my master plan to lull everybody into a food coma and slow down reaction times for the first Compression Molded Polymer Modified (CMPM) race in the MARC series.

Testing had shown that these cars were fast – a well set up CMPM Modified was capable of sub 2 second lap times.  With the physical attraction of Elvis, after all, he is the King, heat

could be an issue.  Practice saw drivers thrashing to find a suitable setup to balance fast lap times while maintaining a reasonable temperature (under 200 degrees…).  Some of the Amateurs chose to run the BSRT C4 magnets and a super stock armature which proved to be a fast combination as well.  A vote was taken to allow the Pros to run first since one driver had an important date at a birthday party.  Six drivers took a deep breath and dove in.  Everybody was fast, but Dr. Pileggi showed how to get the job done by laying down big lap totals and some sub 2 second lap times.  Rob Hayes followed closely but could not catch the Doctor. The Reimels family battled it out, neck and neck all the way.  Tom “When is my luck going to change” Gray picked up a pin in his motor and melted the magnet clip.  He soldiered on with a wounded car.  It was good to see Jim Mac out there – hopefully his busy work schedule will allow him to join us for a few more races.  When the smoke cleared, we had John Pileggi in 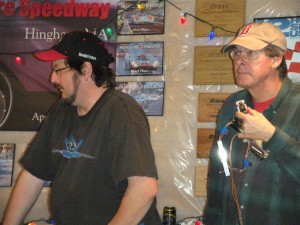 first followed by Rob Hayes in second, Jonathan Reimels, revenging his loss to the old man in G-Jets, in third and John Reimels in fourth.  Tom Gray and Jim Macartney rounded out the field.

Next up, the amateurs took to the track.  It was going to be interesting with a mixture of guys running C4 magnets and SS arms and guys with P10 magnets and hot arms.  Carnage wasn’t bad with most people able to keep the cars on the track.  Only one motor burned – Durf’s SS arm gave up the ghost and he missed one heat. Eric “The Hammer” Handel chewed a pinion and had an extended pitstop while Rob Hayes put things right. When all was said and done, Paul Ryer put his local knowledge to good use to take first spot.  Chis Takacs drove an excellent race using a 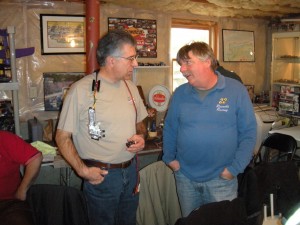 Overall, the Compression Molded Polymer Modified were a blast to run and people will be faster next time now that they’ve gotten some track time with the speed demons. 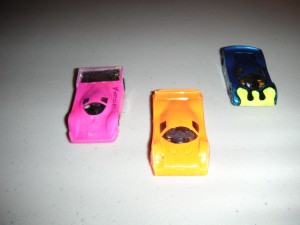 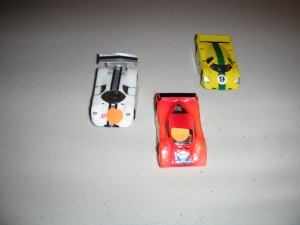 The return of Elvis to the MARC series was a great success.  Thanks to all who showed up for an outstanding day of racing.  Thank you, thank you very much.

This is the race report recorded December 10, 2011