Ashland Massachusetts, February 13, 2021 – Twelve drivers dropped by the LenJet HO Raceway for a full day of racing.  Since we have been running 3-minute heats and attendance has been less then 15 people, it was decided to run 3 classes. Open Weighted was run on the Python, Spec Racer was run on the Boomerang and Super Stock was run on the Champion.  We saw a good mix of cars for all races with BSRT, Viper and Wizzard all represented.  Some new faces were on-hand as well.  Bruce Olsen has been racing 1/24th for many years and decided to try out the HO scene and he likes it!  Tom Bussmann’s son Harrison is no longer the little kid we remember from racing in Tom’s basement participated in his first race.  Hopefully, we’ll see him at future races.  Dave Lockwood, a force to be reckoned it the T-Jet world, was back again to taste the speed of inline cars.  Could it be that he’s developed a taste for magnet car racing? We shall see. 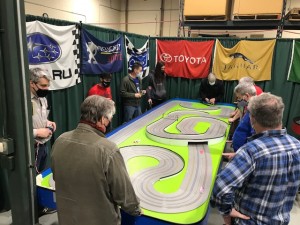 Racing on the Python

First up was Open Weighted on the MaxTrax Python.  This is an entertaining track for these cars.  It seems some drivers have figured out the setup while others are still trying to work it out.  The top Sportsman drivers were ahead of some of the Pros.  I think we’ll see some drivers moving up to Pro next season.  In Sportsman, Dave Lockwood showed he can drive a magnet car by taking the top spot and coming in third overall.  Cody Pare crushed it coming in second a lap

behind Dave and fourth overall.  Peter Medeiros was third in Sportsman just 2 laps behind Cody and the podium was rounded out by Terry Ayers who was 4 laps behind Peter.  In the Pro field Ryan took the top spot with 2 laps over the Peter “The Godfather” Lentros.  Paul Ryer meandered home in third followed by Tom Gray in fourth. 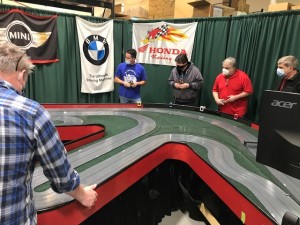 Racing on the Boomerang

Everybody moved over to the Boomerang to try out Spec Racer on the big fast track.  Tire sizes seemed to be smaller than what people expected to get the handling needed in the tight sections of the track.  Once again some of the Sportsman put up more laps than a couple of the pros during a fast and mostly clean race.  This time Cody took the win in Sportsman followed by Peter Medeiros in second and Dave Lockwood in third and Terry in fourth.  Ryan crushed the Pro field in first followed by 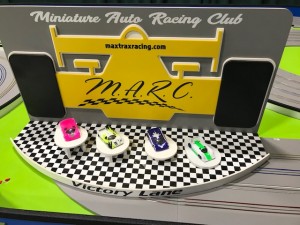 Peter Lentros in second.  Paul and Tom Gray wrapped up the Pro field. 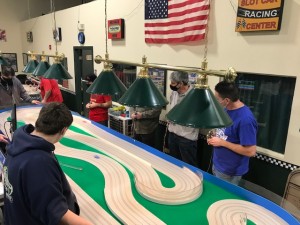 Racing on the Champion

For the last race of the day everyone moved to the Champion for Super Stock.  This was the first HO track at LenJet and has probably seen the most different classes raced on it.  It has served as the Super Stock track for the HOPRA Nationals for the Amateurs and the Pros.  Dave Lockwood took his second win of the day with the top spot for the Sportsman.  Cody was just 2 laps behind, followed by Peter Medeiros in third and Terry in fourth.  Bruce Olsen just missed a spot on the podium by 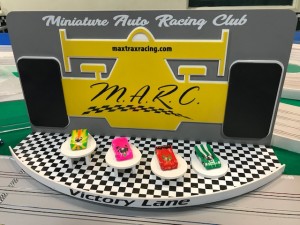 sections.  In Pro, Ryan completed the sweep for the day taking the top spot.  MARC director and some time racer Paul Ryer found a setup that worked and finished 4 laps behind Ryan in second.  Peter Lentros was third followed closely behind by Tom Gray in fourth.

Thank you to everyone who showed up for another great day of racing. Everyone is looking forward to the day we can back to our regularly conducted races, but in the meantime, it’s been enjoyable getting some track time with those who are able to join.  Next race is tentatively March 6th, with Spec Racer on the Scorpion and Modified on the Viper.  Hope to see you there!