Ashland, Massachusetts   December 12, 2020    With many racers choosing not to attend due to the pandemic, the body count for the MARC and East Coast Outlaws racing series has been on low side. Both clubs had events scheduled for December, so the idea was brought forth to have both clubs run on same day to allow enough racers to run the events.  With face coverings and social distancing in place the ECO guys got racing started with their first event around 10:00 (check out the ECO website for race report) 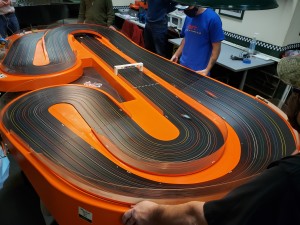 F1 GJets on the Car Model

MARC racing was then underway with 9 racers (a couple ECO guys braved racing cars with the motors spinning on different axis) for F1 hard body GJets on the Car Model track. This track seems well suited to the class and it had been quite a while since MARC had raced on it.  The racing was once again pretty close as seems to be the norm for GJets. We ran sportsman and pro racers together in round robin 3-minute heats.

In Sportsman, John “1/24 racer” Weaver took the top spot at 172, Don Hall 167 earning 2nd; Cody 3rd just a few sections ahead of Peter Medeiros in 4th both at 157; 5th Chris T;  6th Dave “TJet” Lockwood and 7th Joe E both wondering  if they could sneak a GJet into their outlaws grand national TJet bodies.

Lunch break and two additional ECO races later MARC resumed at 4:00 on the Champion track for MARC super stock. If memory serves the last time MARC SS was run on the Champion was the 2018 Nats where a now MARC regular took home the gold in amateur ss action.

Again we ran 3-minute Round Robin heats with sportsman and pro combined with a total of 8 racers. Top spot turned out to be the aforementioned national champion Greg B (pro) this time putting a Fusion in the winner circle with 211 laps; Ryan (pro) taking one of his Vipers out at the 11th hour using Greg’s tire setup from the Nats resulted in 2nd at 206; 3rd overall sportsman racer Cody Pare 184 (quite possibly next HOPRA Nats amateur 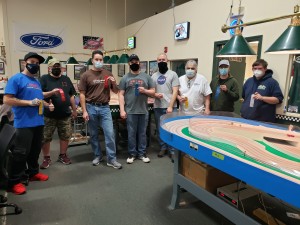 Well masked podium (but not so hot on the social distancing...)

super stock contender when the Nats return to Lenjet, this kid is fast!);  4th once again Peter Lentros 178; Tom Gray 5th 172; Rick Pare sportsman 6th 158; Peter Medeiros sportsman 7th 156; Paul Crosby (MARC sportsman for this division I believe ?) in 8th at 147 just not getting the right setup figured out today.  Come to think about it….what an amateur lineup team MARC could have at the next Nats. Cody, Pete Medeiros, Paul Crosby and Rick Pare ! I wouldn’t bet against any of them.

While we are lucky to be able to get some racing in the last couple months, here’s to a New Year which hopefully brings better days ahead for all!