Who are those masked men? 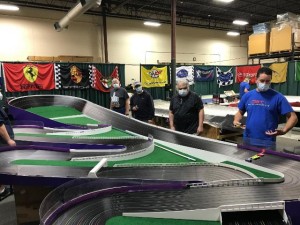 Spec Racer on the Purple Mile - An excellent for Social Distancing

as much as possible and once again the Terry Ayer Remote Driver’s Stations (TARDS) were employed to provide more separation for the drivers and marshals.  As in October, we only practiced on one track at a time.  The Spec Racer class was run first on four lanes of the Purple Mile and the Super Stock class was run on the Bear.  Heats were reduced from 5 minutes to 3 minutes to reduce the time the same people were in proximity of one another.  Lastly there was an IROC race on the Bear with the Viper Scale Racing Retro V cars provided by Ryan Archambault that were a blast to drive. 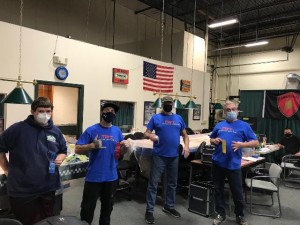 We saw a good mix of cars in Spec Racer with BSRT, Viper and Wizzard all represented.  The name of the game on the Purple Mile is speed, but you win or lose this race in the donut and fingers, so a good balance of downforce is needed.  People seemed to dial in their cars quickly and the racing commenced.  Peter Medeiros brough his friend Sean to join the fun.  Sean has run slot cars for fun but never raced.  Great to see a new face and we hope to see him back in the future.

Sportsman and Pros run together in a Round-Robin for the first race of the day.  Racing was fast and people seemed to have their cars well dialed in.  All in all, the racing was clean with some of the Sportsman finishing better than the Pros.  In fact, Cody Pare finished third overall! Spec Racer and the Purple Mile are two great things that go great together.

Cody Pare was the top Sportsman with a big lead over Peter Medeiros in second.  Mike Tiffany squeezed in one more lap for third over Tom Bussmann who kept all the parts in his car and the body in place to finish fourth.  Sean showed good car control in his first race and handled his marshalling like a veteran.  Nice Job! 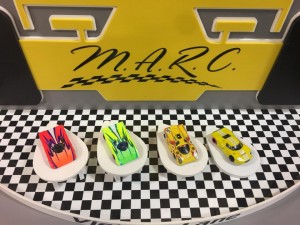 Ryan put down an impressive total to take the top spot many laps ahead of Greg in second.  He also had fastest lap with a 3.304 second lap.  Rob finished third and the Mayor of LenJet, Peter Lentros finished fourth.  Some of us need to up our game or we’ll have our Pro status revoked!

With the Spec Racer program wrapped up, it was time to start getting ready for Super Stock.  The sadistic Club Director decided to make things challenging and choose the Bear for this race.  Monster motors weren’t going to get you the win here.  Handling was key and a quick trigger finger. 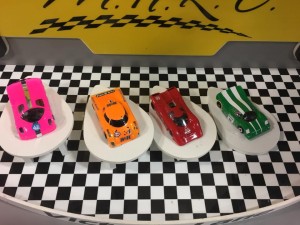 Cody must have been practicing while we weren’t looking.  He took his second blue ribbon of the day and set fastest lap for the Sportsman and Pros!  Cody was first with a fast lap of 2.890 and was just 4 laps off the top Pro.  Peter Medeiros was second followed by Hal in third.  Terry rounded out the podium in fourth just a lap behind Hal.  Sean survived the Bear, and while he didn’t get a T-shirt for it, he showed he’s ready to race with MARC.  We hope he continues to race with the club.

Greg Burstein took his Wizzard car to the top spot with a very clean run.  Nine laps back Rob Hayes took second.  The rest of the field was in another zip code with Ryan third and Peter squeaking into fourth by sections.  I don’t know about the rest of you, but I want another shot at Super Stock on the Bear.

Once again, Ryan provided us with a set of IROC cars.  This time it was a set of the new Viper Retro V cars.  These cars have almost no downforce making for an interesting driving experience.  We were running at 13v on the Bear. The top 6 drivers have had some 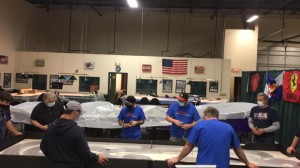 Gravity racing experience as well as experience racing T-Jets.  Since it was the end of the day, we only gave everybody a minute and a half on one lane to set their controllers and get a feel for the cars. Even so, people started adjusting to them quickly. Rather good considering we had just finished racing Super Stock on the same track.   I’d recommend the car to anyone looking for a slower car but doesn’t want to go the T-Jet or Gravity route. Plus, they make for some close IROC racing.  Well done Viper Racing and thank you Ryan for providing the cars. 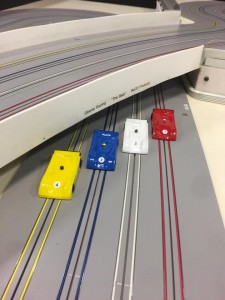 Thank you to everyone who showed up for another great day of racing.  Next race we will be back at LenJet wearing our masks, etc.  We will be racing F1 G-Jet on the Car Model track and Super Stock on the Champion.  Hope to see you there!