Ashland Massachusetts, October 10, 2020 – Thirteen drivers came out of the Covid quarantine to see if racing would be possible when following the current recommended guidelines.  I think all the attendees would agree the answer is yes!  Everyone in 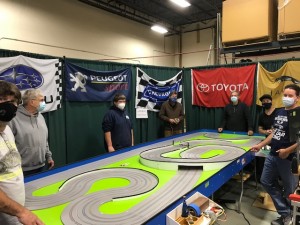 attendance worn a mask properly covering their mouth and nose.  Everyone made an effort to keep socially distanced and to assist with these Terry Ayer provided some remote driver stations there were employed to provide more separation for the drivers and marshals.  To allow use of the driver stations, we only practiced on one track at a time.  The Open Weighted class was run first on the MaxTrax Pyton and the Super Stock class was run on the Viper Scale Racing Boomerang.  Heats were reduced from 5 minutes to 3 minutes and European rotation was used to reduce the time the same people were in proximity of one another.  Lastly there was an IROC race on the Boomerang with cars provided by Ryan Archambault.  Great to be back racing!

First up was the first Open Weighted class race of the season.  People are really getting into this class and learning to turn these cars.  The field was a mix of Viper, BSRT and Wizzard Fusion chassis.  These turned out to be a good match for the Python.

Sportsman and Pros run together in a Round-Robin for the first race of the day.  All in all, the racing was clean with some of the Sportsman finishing better than the Pros.  In fact, Terry Ayer was fourth overall! Racing was fast and people seemed to have their cars pretty well dialed in.

Terry Ayer was the top Sportsman closely followed by Cody Pare in second, and Peter Medeiros in third.  Rick Pare rounded out the podium in fourth.  It was great to see Tom Bussmann and Peter Medeiros back at the track.  Hopefully they will be at future races.

Ryan put down an impressive total to take the top spot with Peter in second 6 laps behind. Rob finished third and the club director was a distant fourth.  Some rusty trigger fingers out there that need some practice! 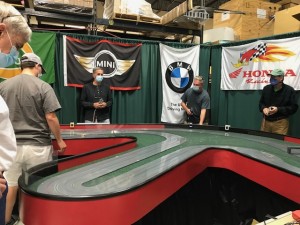 With the Open Weighted program wrapped up, it was time to start getting ready for Super Stock.  The Boomerang was the site of the Pro Super Stock race the last time the HOPRA Nats were in town so some of the pros had a head start on the setup.  As with the Open Weighted race, there were Viper, BSRT and Wizzard Fusion cars on the track and Pros and Sportsman raced togehter.  Great to see a mix of manufactures out there.

Peter Medeiros showed he still has got the chops taking down the win just 6 laps ahead of Cody Pare in second and who was just a lap ahead of Terry Ayer in third.  Hal Pierce took the last spot on the podium.  Once again, some very close and clean racing from the Sportsman.  Tom Bussmann suffered the Bussmann curse.  A missing axle retaining pin and a loose body hurt his lap totals a bit.

Very close racing for the Pros as well.  Greg Burstein showed up and joined in the racing.  Rob Hayes took the top spot closely followed by Peter in second, Greg Burstein in third and Tom Gray in fourth.  Ryan Archambault experienced some brush issues with his Fusion, but I’m sure he’ll get it sorted out.

New to Marc for the 2020 season is the addition of an IROC race (Thanks Ryan for the cars and writeup!).  For this race on the Boomerang we ran 4 Harden Creek prepared BDR cars. The BDR chassis comes from the UK’s Slotcarsdirect and is based off the Tomy srt/turbo with some improvements over the original. The cars as equipped ran 6 ohm arms with ceramic magnet motors, level 10 traction magnets and slip on tires.  16 volts seems to be a good voltage for these cars. The 908 Porsche hard bodies came from DB racing (Mike King) in an appropriately themed “COVID 19 Pandemanium” paint scheme.  Drivers took to the track for 3-minute round robin action.  Some very close racing occurred for many laps with racers able to really run side by side.  When the checkered flag fell it was Greg Burstein taking the win with 121 laps,  Cody Pare, Mike Tiffany, and Ryan Archambault in that order all on same lap of 113 separated by mere sections, Pete Mederios at 112, Tom Gray and Peter Lentros at 111 with Tom a few sections ahead, followed by Tom Bussmann, Hal Peirce, Terry Ayer, and Rick Pare.  Fun was had by all and some Pandemanium IROC race awardsprovided by DB Racing were handed out.  Discussion of next month IROC race with the Viper Scale Racing Retro C anti-gravity cars began.  Who will come out on top?  Stay tuned till November 14!

Thank you to everyone who showed up for another great day of racing.  Next race we will be back at LenJet wearing our masks, etc.  We will be racing Spec Racer on the Purple Mile and Super Stock on the Bear.  Hope to see you there!