The Last Race, for now anyway

Suffield CT, March 14, 2020 – 17 drivers made the last race before everything shutdown.  Special guests Paul Kniffen and Roger Porcelli were on hand for the MARC race and the 6-hour Enduro to be held Sunday.  Bill Bonsma and his son William were back to join the fun.  That’s two months in a row.  Perhaps we’ll be seeing more of the Bonsmas in the future.  Victor Feliciano also made the trip for some CMPM racing on Dan’s Scorpion.  A new addition to the Taj MaHO is the swoopy Nuvolari track that formally resided at John Stezlecki’s Nantasket Beach Raceway.  The track has been successfully moved, leveled, strengthen, and spiffed up by the always fastidious Dan DeCosmo.  Dan re-ordered the driver stations so you just ‘move down the line’ for European Rotation.  Donuts and coffee greeted the drivers as they arrived for a full day of racing. 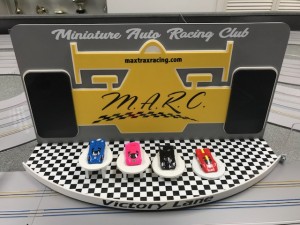 First up was Spec Racer on the Nuvolari.  We have run Spec Racer on this track before when it was at Stez’s.  They ran just as good on the track in its new location although some people were still searching for the right compound and tire size to give traction in the bank and to get through the squiggles cleanly.  Personally, I found the Viper medium compound tires worked well.

Sportsman and Pros run together in a Round-Robin for the first race of the day.  All in all, the racing was clean with, although there was some mayhem in the bank with cars sliding wide.  In the end, Dan took his rocket ship to the top of the podium with 471 laps, 12 laps over second place.

Mike Tiffany quietly cycled through the lanes not attracting any attention and in doing so ended up at the top of the podium for the Sportsman.  With 447 laps, Mike was just a few laps behind the pack of Pros in the 450s.  Cody Pare struggled a bit in Yellow and Blue and then found his groove finishing second.  Oh Jimmy struggled a bit as well but pushed on to finish third.  Rick Pare took the last ribbon and William did well his first time out on the very fast Nuvolari track. 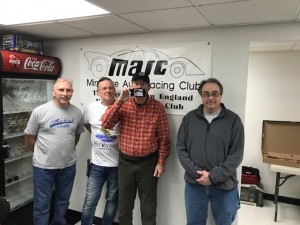 Dan was unstoppable as he drove to the top spot on the podium.  Behind Dan, things got tight.  Erik took second with 459 laps and then the finishing positions for the next four drives was determined by sections since all had 454 laps.  Once final calculations were done, Rob Hayes was third and Paul Kniffen (Don’t let Paul fool you, his focus today may be T-Jets, but he can drive the fast stuff just as well) took home the 4th place ribbon.  Dr. Pileggi missed the podium by 1 section, but he would get his revenge in the CMPM race.

With the Spec Racer program wrapped up, it was time to start getting ready for Modified for the Sportsman and CMPM for the Pros.  This was the second time this class has been run on Dan’s new MaxTrax Scorpion.  The track is very fast and very smooth.  A real blast to race on.  With some drives leaving and some drivers joining, we had four Sportsman for Modified and ten Pros for CMPM.

Bill Bonsma joined the Sportsman for the Modified race claiming lack of equipment and skill to deal with the faster CMPM cars.  We’ll let you get away with that this time Bill, but we know you’ve got the skill.  Bill drove to the top of the podium with 404 laps.  Cody Pare had issues in Yellow that most likely knocked him off the top spot, but he stuck with it and brought home second.  Oh Jimmy looked pretty consistence and finished third and William had another good showing for his first time on the track and first time driving a Modified. 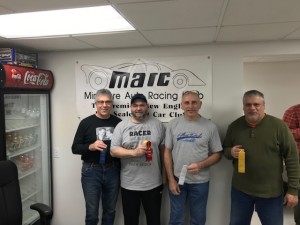 Roger and Victor joined the crowd for the CMPM race.  Uncharacteristically, Rob Hayes struggled with equipment problems that keep in the back of the pack.  Everyone else seems to deal ok with the downforce of the MaxTrax and no smoke was released during the race.  John Pileggi reminded everyone why he is one of the top drivers in MARC by blasting out 510 laps to take the win with a 24 lead over second place Roger who had a very stout run for his first appearance on Dan’s Scorpion.  Dan took the third-place spot followed by Victor who had a great run for his first time on the Scorpion to take fourth.

Ribbons were awarded, hands were not shaking (fist bumps, elbow bumps, etc. were the greeting of the day) and everyone packed up and headed out.  Thank you to everyone who showed up for another great day of racing in some trying times.  I’m not sure when the next race will be as we wait for this pandemic to run its course, but I can’t wait.  It’s always a good day at a MARC race and I’m missing the competition and comradery when we get together.  Stay safe and tune those cars up.  We’ll see you on the track as soon as we can.