Hull, Massachusetts, November 19, 2011 – Under beautiful blue skies, MARC ran its annual event at the Nantasket Beach Raceway in Hull this past Saturday. Usually MARC runs two events at NBS, one on the Lady Gray and the other on the Nuvolari.  With a crowded schedule, the decision was

made to run only one event in Hull this year but split the day so the F1 G-Jets would run on the Lady Gray and Super Stocks would be contested on the Nuvolari.  In hindsight, it was a wonderful idea.  Thirteen folks ignored the leaves piling up in their yards and headed down the winding, twisty road known as Route 228 in route to one of the finest HO facilities in existence.  As usual G-Jets kicked off the day’s event, once again in the longer wheelbase configuration utilizing open wheel hard bodies.

John Reimels won the Pro event with a solid driving performance on all four lanes. He managed to bang out 211.10 laps and drove several laps in the 4.9 second bracket. Nice 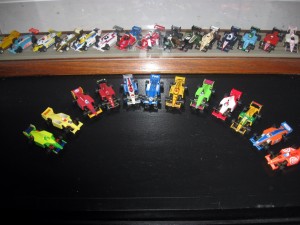 win John – congratulations. Two full laps behind was another “John”, this time with the last name Stezelecki. Stez couldn’t catch the first John but still put up enough laps to hold onto 2nd place in the Pro Division. Completing the sweep by the “Johns”, Dr Pileggi, winner of several races on the Lady Gray over the years, had to settle for a third place with 204.01 laps. Joe Eastlack, aka The Big East, scored 191.10 laps to finish fourth Pro. I’m not sure if the Lady Gray has ever been kind to Tom Gray; he ended up with 182.01 laps resulting in the final spot, 5th, in the Pro G-Jet event.

Paul Ryer won this event by 4 laps over a very determined Vince Tamburo to pull off the win. Ripping off several sub 5 second laps, Paul managed to knock down an impressive 210.01 lap total, second only to the winner of the Pro division. His skillful drive earned him a very fine win. Vincent also had an incredible run and took second place with 206.02 laps. Mike Resnick had an amazing run considering his late arrival deprived him of practice. Mike used a loaner NBRC car that John Pileggi elected not to run.  Mike powered the car to 205.02 laps and a third place finish.  Chuck Turner took the last ribbon spot with a 190.02 lap total – that’s the way to go Chuck. The fifth spot went to Dave Muse with 188.02 laps. Two laps behind Dave for the sixth spot was Phillip Hilgert. This was Phil’s first event at Nantasket Beach and the Lady Gray is usually not nice to first timers but Phil did a pretty good job with his 186.07 lap finish. Eric Crash Handel kept things under control for a change to land the 7Th spot crashing down 179.04 laps. Don Hall’s 161.01 laps gave him the final position, 8th, in the AM race.  Congratulations to Paul Ryer for a fine victory.

At last year’s Super Stock race on the Nuvolari, John Pileggi won the event with a 485 lap 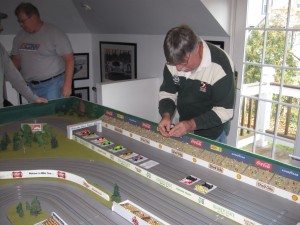 performance. Wouldn’t ya know, this year John won the same event with the same lap total – 485 laps (Dr P – play that number…). Talk about consistency – wow.  John’s best time occurred during his run on green with a very fast 3.110 second lap. Nice going John. Two years in a row – ya think he has the set-up figured out? Fourteen laps behind Pileggi was John Reimels racking up 471 laps.  Paul Ryer, winner of the amateur event, joined the Pros coming away with a Pro third place ribbon with his 439 lap performance. The Big East, Joe Eastlack walked away with the fourth place ribbon. Pretty darn good when you consider Joe hasn’t raced magnet Super Stock in several years. Those T-Jets that he’s been racing must be helping his concentration a whole lot. Tom Gray took the fifth pro spot with 400 laps. John Stezelecki pulled out of the race with a DNF. Congratulations to John Pileggi for his second victory in a row on the Nuvolari.

Paul Ryer won big time in the amateur race on the Nuvolari with a fantastic finishing total of 463 laps. The closest driver to Paul in this division was Mike Resnick who was 34 laps 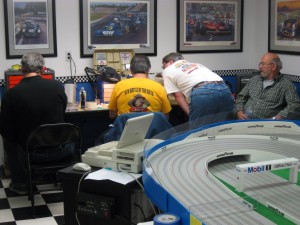 back finishing with a lap total of 429 laps. Mike took home the second place ribbon for his first Super Stock event on this track. Dave Muse was struggling a little but did well enough to take the third place ribbon by popping up 421 laps. Congratulations to Paul Ryer for a splendid victory.  Phil Hilgert punched out 391 laps to take the final ribbon in the Amateur Division while Vincent Tamburo placed 5Th with 386 laps. Eric Handle took the final position with 350 laps.

Thanks to John Stezelecki for hosting another great event.  For those who’ve never ventured out to what seems like the end of the world, you don’t know what you’re missing!

Next up is the debut of South Shore Speedway on December 10th.  Elvis is in the building and faster than ever.  NASCAR Lexan G-Jets will be up first followed by the introduction of HOPRA’s Compression Molded Polymer Magnet Modifieds (now THAT’s a mouthful…).  Hope to see you there.