A Tale of a new class and a lost car.

Hingham Massachusetts, December 8, 2018 – Sixteen drivers made the trip to South Shore Speedway to for another fun filled day of racing the Elvis road course.  Coffee and donuts greeted the drivers as they arrived and set up shop.  The track was ready and so were the drivers.

First up was the second race for the new Open Weighted class.  The field was a mix of 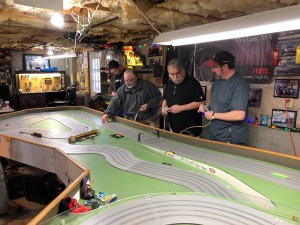 Viper and BSRT chassis.  Most people were running 6-ohm arms, but there were a few 7-ohm BSRT arms out there.  Lots of experimenting as people work to dial in the cars for this class.   Fast lap times seem to be a half second or so faster than G-Jets.  After an hour and a half of practice, we were ready to race.

Sportsman and Pros run together in a Round-Robin for the first race of the day.  All in all, the racing was clean with some of the Sportsman right behind the Pros.  Race pace was fast with many drivers turning in lap times just over 4 seconds.  The fast lap of 3.449 was set 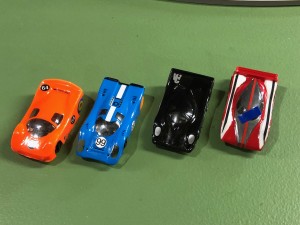 by Ryan Archambault in the blue lane.  The next closest driver was the host Paul Ryer with a 3.717 in blue as well.   Ryan had a rocket ship, but it’s not always the fastest car that wins the race.  Well, in this case it was.  Ryan finished 27 laps ahead of second place.

In the Sportsman group 3 laps covered the top three drivers.  Hal Pierce has been having a great start to the season and he continued by taking down the win 2 laps ahead of Don

Hall in second.  “Oh Jimmy” was just a lap back to finish in third and Terry Ayer rounded out the podium in forth.

As mentioned above, Ryan not only had a fast car, but had a fantastic drive to take down the win in the Pro group.  John Reimels was second followed by new Telsa owner Rob Hayes (Rob is working on a way to power his car off the bus overheads in Cambridge, so watch out).  Paul Ryer filled out the podium 4 laps behind Rob.  Peter Lentros just missed the podium 2 laps behind Paul.

With the Open Weighted program wrapped up, it was time to start getting ready for Super Stock for the Sportsman and CMPM for the Pros.  Peter, Don and Tom had other commitments leaving us with thirteen for the afternoon program.  We alternated between Super Stock and CMPM practice sessions.  John Reimels found an interesting hiding place for his car somewhere in the shelves.  After some intense searching, it was abandoned to

be found another day (Only took me an hour and half and dismantling of some storage to find it).  After some lunch and two hours of practice most people were ready to race and the rest resigned themselves that they would have to make do with what they had.  First up were the Sportsman who ran a very clean race.

“Oh Jimmy” sent the fasted lap at 2.675 and mixed that with some very clean driving to take the top spot on the podium 16 laps ahead of second.  Terry Ayer took second with Paul Crosby 4 laps back in 3rd.  Hal Pierce rounded out the podium.

The Pros also ran a pretty clean race although there were still some heat issues.  A melted

pinion took Rob Hayes out of contention and gremlins plagued Ryan during the race.  Quietly minding his own business Jim Macartney took the top spot with a great run.  12 laps back John Reimels was second followed by Erik Eckhardt in third and Paul Ryer in fourth.

Ribbons were awarded, hands were shook and everyone packed up and headed out.  Thank you to everyone who showed up for another great day of racing.  See you at the next MARC race in January at Modelville/Lenjet where the classes will be MARC Spec Stock on the Purple Mile, Modified for the Sportsman on the Purple Mile and CMPM for the Pros on the Viper.