Ashland, Massachusetts   June 20, 2018   Paul Ryer did a great job representing the GRoNE folks at the 2018 Nats with an awesome 2nd place finish in the Gravity Race, only 3 laps off the pace set by winner Scott Terry.   NICE JOB!  Overall GRoNE was well represented with a total of 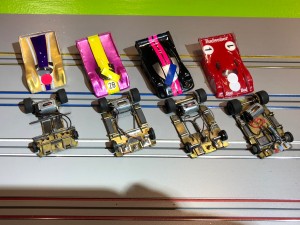 nine entrees and 14 cars in the 35 gravity car field.  I built 13 of the cars, the same as the number of LandShark entrees from Al Thurman.  The best finishes for my cars were a center hinged anglewinder driven to a 5th place finish by Greg Burstein and a necked-in rail anglewinder driven by Ryan Archambault to an 8th place finish.  I just missed making the semi by 3 feet using my center hinged car finishing in 9th place.  I’m disappointed in my driving, the car had more in it then I did…  The field was basically a mini-motor field day with only one AFX car in the race.  Missing were Joel Pennington (recovering from some health issues) and Doug Morris; had they been present, I assume we would have seen some competitive AFX cars in the field – Joel’s lowered AFX has won the past two gravity races at the Nats and was prevented from seeking a 3rd straight win by Joel’s absence.  Looking at the cars in the 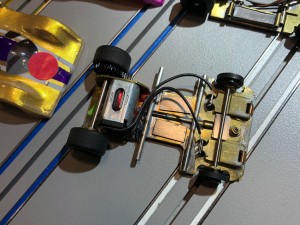 main, finishing first was Scott Terry debuting his latest design, an awesome looking center hinged chassis using his reverse pick up shoe design; it utilizes a long hinge with the weight of the chassis concentrated closer to its center-line.  In second was Paul using a car he built based on Joel Pennington’s side winder configuration; rather than running the side rails straight forward, Paul necked in the main rails where they’re soldered to the front plate to give the chassis a bit more flex.  Jim Keen finished 3rd in a sweet looking center-hinged sidewinder built by Dean Schober.  In fourth was Tony Baldock, all the way from England, using an anglewinder built by Al Thurman.   Common to all of these cars were chassis designed to flex; also of note, the top three were all sidewinders using narrower rear tires – thought to ponder, was their advantage the motor placement or the use of narrow tires or the talent of the drivers…  While the bulk of the field used cars built by Al or me, a few racers built their own cars – hats off to these folks, that’s what this class is all about (Paul Ryer and Shawn Molter to name but two…).  The complete finishing order is available on the HOPRA website (although the chassis designation is not totally accurate).

Also of interest was the Brass War race on Tuesday evening that officially kicked off the 2018 Nationals event.  We used the old BRASCAR rules with the stipulation that a Mabuchi HT50 style motor be used.  The race was run on the Parma track that Peter had 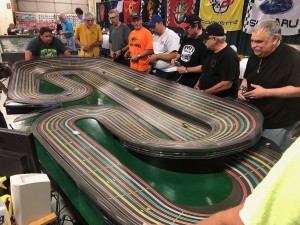 restored to better than original condition.  Unlike the original Nats run on this track in 1972, we were able to use all eight lanes thanks to the widening of the gutter lanes done as part of the restoration project.  We really need to use this track more often, while the eight-lane configuration makes marshaling a challenge (as does the off-color lane striping…), every one of the 19 entrants enjoyed the event.  I won the race using a simple in-line motor chassis with a shaker pan that I made over seven years ago.  Trevor Machuga finished second using one of the original chassis made by AJ Hoyt for the 1972 event!  Trevor did an awesome job restoring the chassis to its original configuration including the modifications made to the HT50 motor – it looked and ran real sweet; it is amazing that Trevor has this car and was able to run it on the same track 46 years after it’s original debut at the 1972 Nats – just think about that for a second.  The next four positions were taken by Erik Eckhardt, Shawn Molter, Richie Audet and Peter Lentros using sister cars to the one I drove.  As mentioned before, we need to use this track more often – BRASCARs on the Parma track is truly a match made in heaven…

Thanks to all that participated in these events at the Nats, it was nice to see how well GRoNE did in only our second season as a group.  Rumors are that we might be in Denver for the Nats next year, I hope that many of us can attend.  Speaking of next season, I’d like to kick off our third season with an event sometime the end of August or early September, I’m looking for a venue, please let me know if you’re interested in hosting.