GRoNEing on a nice sunny day

Racing T-Jets on the Python

GRoNE event at Peter Lentros’ LenJet Raceway on a real warm, sunny Saturday this past April 28th; 13 participated in the T-Jet race while 12 ran the Gravity race.  In addition to the usual cast of characters, we had Ernie L, Dick Griffin and Bob Withers make their first appearances at a GRoNE event, the more the merrier.  Unfortunately, neither Joel Pennington nor Rick DeRosa could attend the event, Life keeps getting in the way of racing slot cars. 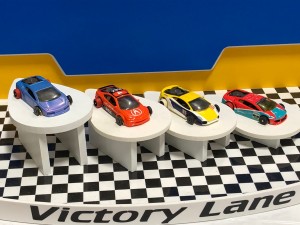 Cars on the Boomerang, it was time to run the T-Jet race.  The top five had a real barnburner being separated by only 3 laps.  Paul Ryer took down the win by ½ of a lap over John Reimels followed by Peter Lentros two laps further behind.  Ryan Archambault beat out Donny Hall for fourth by just sections; a single off making all the difference.  Paul Ryer ran a real consistent race getting 25 laps across the board.

A full field of Gravity Cars - 8 anglewinders, 3 sidewinders and a lonely in-line

Ernie and Dick elected not to run Gravity cars but with Dave Muse joining the fray, we had a healthy 12 drivers for the Gravity race.  A real nice omen for the class is that 9 of the 12 drivers raced their own car; gone are the days where most folks ran borrowed cars.  We had 8 anglewinders, 3 sidewinders and one lonely in-line – all mini-motored cars.  Ryan tried his AFX based car but was off the top times being set by the mini-motor cars so he borrowed a car from my stable, technically this means 10 of the 12 racers had their own 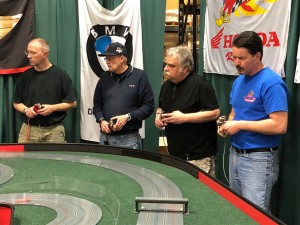 Some intense driving going on... From left to right it's Paul Crosby, Tom Smith, Peter Lentros and Ryan Archambault

cars!  Once again Paul Ryer and John Reimels had a good battle for the win, this time John beating Paul to the line by 2 laps.  Paul had a tough run in blue otherwise it would have been closer (but I still would have won! – JR).  Dave Muse finished an awesome third trying out his latest controller that had a different power profile more suited to the mini-motor cars.  Dave is really doing some nice work on the controller front, he deserves more recognition than he’s currently getting (but please wait until AFTER the Nats before asking him to make a controller for you, hahahaha – JR).  Following Dave home for fourth was Ryan Archambault, ½ a lap behind Dave.  Tom Gray finished sixth only a few laps off the pace set by Dave and Ryan. 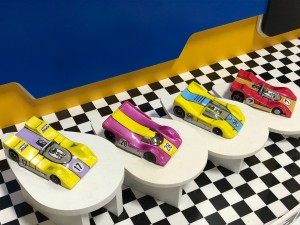 With the second race over, rather than have another race, the decision was made to open both tracks for more practice time and let those wanting to enjoy the first real sunny day of spring go home to do yard work (I stayed for the practice time! – JR).

Thanks to Peter for hosting and special thanks to all 14 drivers who attended – without you guys we’d have nothing.