Southampton, MA   March 24, 2018   Seventeen races made the last point paying race of the season at Ryan Archambault’s Fast Five Raceway.  On the docket for the Pros were two 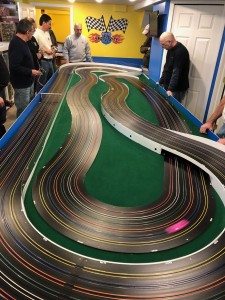 of our faster classes – Spec Racers and CMPM while the Sportsman were running Spec Racers and Super Stocks.  Gerd Wolny and Gary Hallenbeck made their first appearance of the season, it was great to see them again.

Per this season’s rules, the Spec Racer event was run combining the Pros and Sportsman drivers together in one long 17 heat round robin.  Host, Ryan Archambault, showed that he knows the way around his track by winning the event in a very dominant fashion – he set the high lap mark in 4 of the 6 lanes, he set the fastest lap in 5 of the 6 lanes, he set the overall fastest lap of the race in the RED lane (now he’s just showing off – JR) and he was the only driver to break into the 2 second bracket in all six lanes.   To further prove his dominance, his other cars also finished 2nd

and 5th driven by Greg Burstein and Dan DeCosmo respectively.  Clearly Ryan doesn’t understand that hosts are supposed to be humble…  Tommy Gray had an awesome race finishing third, the top finisher in the non-Ryan category followed by John Pileggi in 4th.  The top Sportsman was Gary Hallenbeck with an 8th overall finishing position followed by Tom Jahl, Gerd Wolny and Oh Jimmy Colligan.

After the race, the group feasted on an 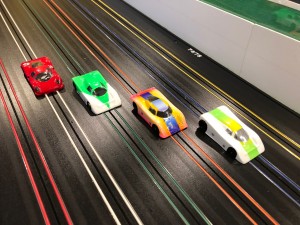 awesome lasagna (actually two lasagnas – JR) made by Ryan’s wife.  I think it was Ryan’s plan that we all eat too much to lull the competition to sleep in hopes of continuing his domination of the day.

For the second race of the day, the Sportsman ran Super Stocks while the Pros ran CMPM. 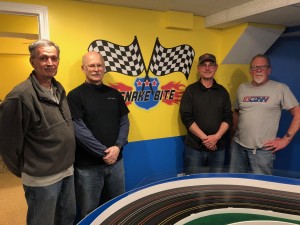 With the speed discrepancy so great, practice was broken up into 15 minutes intervals alternating between Pros and Sportsman – this seemed to work fairly well.  Once again Gary Hallenbeck lead the way beating Tom Jahl by 4 laps at the finish; Tom had a miserable run in yellow otherwise he might have had something for Gary.  Gerd finished 3rd only 2 laps off Tom’s pace.  Hal Pierce won the best of the rest race finishing 4th, 36 laps behind Gerd.

Since this was the first time that MARC ran CMPM cars at Ryan’s, the decision was made to only run the center four lanes leaving plenty of runoff for those pushing too hard – of which there were many.   Despite the frequent offs, running these cars on Snake Bite was 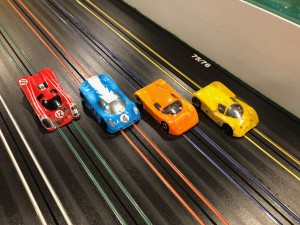 really fun, my only complaint was the blister I got on my trigger finger but it was worth it!  Apparently Ryan’s lunch ruse backfired as it was he that was slightly comatose after eating too much lasagna allowing John Pileggi and Dan DeCosmo to dominate the race.  John had a mishap in the green lane costing him a few laps and try as he might, he couldn’t make up that deficit with Dan beating him to the finish by a lap.  Watching these two battle it out on a very fast track with very fast cars was extremely entertaining.  Ryan finished third with an awesome run in the green lane setting high heat lap total but he was merely mortal in the other lanes finishing 22 laps off the pace set by Dan and John.  Rob Hayes rounded out the podium with a 4th place finish.

With this being the last point paying event of the season, the championships have been determined.  Thanks go to all participates but the laurels go to the following: