Hingham Massachusetts, December 9, 2015 – The threat of snow did not scare off the MARC faithful.  Arriving from across Connecticut, New York, New Hampshire, and 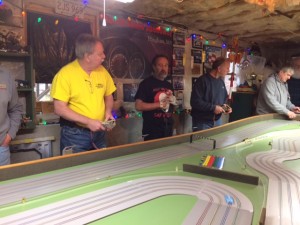 Massachusetts, sixteen drivers showed up rub fenders on the Elvis road course.  Coffee and donuts greeted the drivers as they arrived and set up shop.  The track was ready and so were the drivers.

Vintage NASCAR was the theme for the G-Jet race and once again Peter Lentros made sure there were bodies for everyone with a shipment of freshly painted bodies from Terry Flynn at Harden Creek.  Peter could not attend so Paul Crosby delivered bodies and tires.  Those, along with the bodies by Reimels and others made for an authentic looking NASCAR field.  You could almost see the driver smoking a butt while their cars were being refueled.  An hour and half of G-Jet practice got pretty much everyone under 5 seconds with some drivers flirting with the 4 second barrier.  We were ready to race.

This year Sportsman and Pros run together in a Round-Robin.  All in all, the racing was clean with some of the Sportsman right behind the Pros.  Race pace was fast with many drivers turning in sub-5 second laps.  In 2015 we were happy to get a lap under 5 seconds.  This year the fast lap of 4.045 was set by Ryan Archambault in the blue lane closely followed by Stez with a 4.085 in the yellow lane.  The top drivers all fast laps times under 4.5 seconds a lap in all lanes.

In the Sportsman group 10 laps covered the top four drivers.  “Oh Jimmy” took the top spot followed by Tom Jahl in second, Mike Tiffany in third and Paul Crosby in fourth.  Not a bad showing by Paul who was at his first MARC race of the season.  A recent Stez recruit, Bob Jones had a good showing.  Unfortunately, an incorrect hookup in red blew a fuse and cost Bob a better finish.  Lesson learned, he checked carefully on the remaining lanes in the race.

Stez once again showed why he is King of the G-Jets taking down the win four laps ahead of second place.  Rob Hayes rolled in second closely followed by John Reimels in third and Ryan Archambault in fourth.  Only seven sections separated 3rd and fourth place. 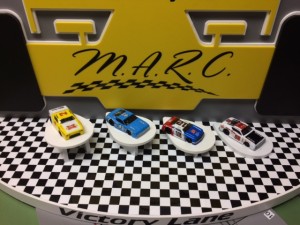 With the G-Jet program wrapped up, it was time to start getting ready for Super Stock.  Stez and Bob Jones decided they had had enough racing for the day and Dan Decosmo need to tend to some train business so that left us with thirteen drivers for Super Stock.  Given the weather, we ran the Pros and Sportsman together.  After some lunch and two hours of practice most people were ready to race and the rest resigned themselves that they would have to make do with what they had.  The big question when running on Elvis is how low to go.  Jim Mac and Tom Gray ran into heat issues and cooked before the end.  Everyone else seemed to find a setup that kept the smoke in the cars and there was some close racing.  Fast laps were just under 3 seconds.  Once again Ryan was the fast guy on the track with a fastest lap of 2.751 seconds in yellow.  Tom Jahl set fastest lap for the Sportsman with a 2.741 second lap in blue just a tick off the time set by Ryan.  Once again racing was close and pretty clean with a minimal number of track calls.

“Oh Jimmy” swept the day in Sportsman with his win in Super Stock.  Great drive in both races by Jim with clean consistent laps.  Tom Jahl rolled into second  5 laps behind Jimmy.  Paul Crosby was a lap behind Tom to take third and reformed T-Jet racer Matt Patrick was 4 laps behind Paul to take fourth.  Terry, Hal, and Mike rounded out the field.  Great clean racing by the Sportsmen.

The top four Pros were also closely grouped.  Rob Hayes took the win with a high lap total in the green lane of 91 laps proving  once again  Green is the lane to master.  John Reimels finished second just 3 laps behind Rob.  7 laps behind John were third place finisher Paul Ryer and fourth place finisher Ryan Archambault.  Once again Ryan was cheated out of a third place finish by sections.  This time by only 3 sections.  Tom and Jim suffered motor and pinion problems and were off the pace.

Ribbons were awarded, hands were shook and everyone packed up and headed out.  Thank you to everyone who showed up for another great day of racing.  See you at the next MARC race in January at Modelville/Lenjet where the classes will be MARC Spec Stock on the Purple Mile, Modified for the Sportsman on the Scorpion and CMPM for the Pros on a track to be named later.