November 11, 2017  Hull, Massachusetts   This was an unusually cold early  November Saturday but the cold didn’t stop 21 drivers from attending the MARC event here in Hull.

G-Jets on the Lady Gray 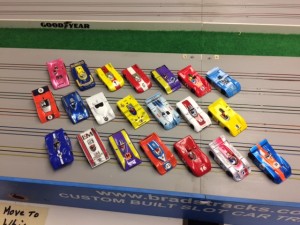 A full field of CanAm cars ready to race

Lady Gray track.  This was a mixed driver event were both Sportsman and Pro drivers were all in the same race. Dan DeCosmo dominated the field of twenty one with an incredible record breaking 230.07 lap performance.  In three of the four lanes Dan drove best lap times well below five seconds, only in the yellow lane did Dan not achieve that with a best of 5.081 on the yellow lane. Dan’s previously best with the G-Jet on this track was 226.5 laps with a F1 G-Jet on November 14th of 2015. Fantastic race racing Dan. Congratulations with a record-setting performance. 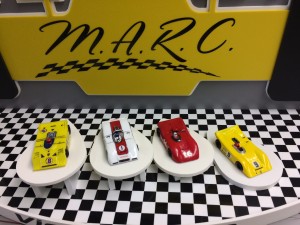 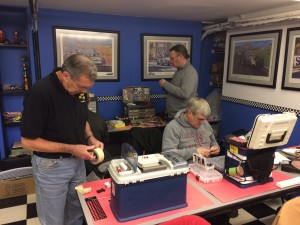 Busy in the pits 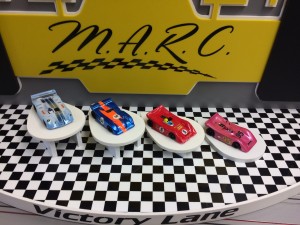 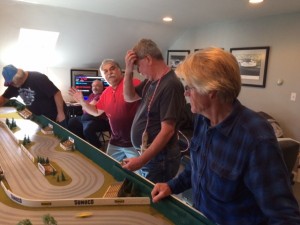 Lots of head scratching going on trying to figure out these damn G-Jets!

Super Stocks on the Nuvolari

The MARC Super Stock event was held on the Nuvolari Super Speedway.  Both Sportsman and Pro classes had some pretty exciting racing.

In the Sportsman Class Don Hall narrowly nipped Dave Muse by only one section. The victory for Hall came in the final seconds when Don took great advantage of being on the middle green lane and David on the gutter red lane in the final heat.  It was amazing to see Don nip away at Dave’s large lead in the final seconds to secure the win. Don’s best lap time was on the white lane with a pretty fast 3.135 second lap. He had a high lap total of 74.04 laps on the green lane. 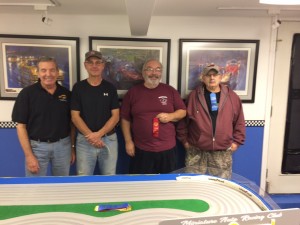 John Reimels ran a beautiful Ceramic Super Stock race easily taking the checkered flag with a four hundred and eighty-four lap performance . This lap total beat his previous best lap total in Ceramic SS  of four hundred and seventy six on November 14th 2015 on the same track. John also beat his best lap time in this class on the Nuvolari with a 3.179 on blue. Prior to this race his best lap time was 3.202 green lane on December 10th 2016. Congratulations to John for a job well done.

Paul Ryer had to feel pretty good taking second place with 472.04 laps and a best lap time finish for all drivers with a blistering 3.122 on orange. Nice job Paul 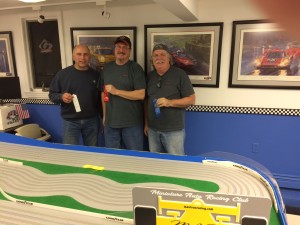 Now a message from the Communication Director:

Thanks go to John Stezelecki for hosting the event with a special thanks to John for his efforts in recruiting new drivers – he’s been working with a group of newbies and had 4 of them here for their first MARC race.  John also reintroduced me to HO slot car racing just over 8 years ago (yes, he’s to blame… -JR) and I know he also recruited our current director, Paul Ryer, a year before me.  Without efforts from folks like John, entrees could dwindle.  Let’s learn from John and all make an effort to recruit more folks.

December 30 – GRoNE at Peter Lentros’ LenJet Raceway w/ Gravity on the Boomerang, BRASCARs on the Parma and TBD for the third race