Cambridge, Massachusetts  November 4, 2017    Six racers made their way to Catfish International Speedway to join host Rob Hayes for a day of racing, GRoNE style.  The first 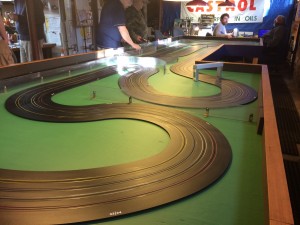 Rob had his Catfish International Speedway ready for action

race on the docket was a T-Jet race.  Out of habit, I’ve always referred to this race as using ECHORR rules.  As a group, we’ve decided to adopt the HOPRA rules as a better fit for our events since we’re already using HOPRA’s Gravity rules.  The changes are somewhat subtle  but NOT insignificant – gone are the 12T and 14T pinions but welcome are the DASH armatures!  Starting with our next event, HOPRA rules will be in effect if we run T-Jets.

A full field of T-Jets

After an hour of pick-up shoe tweaking, it was time to race.  Jonathan Reimels was making his return to racing, his first appearance since the 2016 Nats; based on the race results, he hasn’t lost his touch!  He took down the win by one lap over track owner Rob Hayes.  Paul Ryer finished a close third one lap behind Rob followed by Peter Lentros in fourth.  It was the White and Red lanes that made the difference in the top finishing positions as everyone seemed to have Blue and Yellow nailed.

With the voltage dialed down to 18 volts and the double stick tape applied to the front straight, it was time for some Gravity Racing!  Rob and Dave were breaking in new rides,

both center-hinged anglewinders based on the latest Motown kit; Paul Ryer was trying out his center-hinged in-line chassis while the rest of us were running our tried and trued cars from past events.   In general, lap times were in the mid-seven second range, a full 4 -5 tenths quicker than the fast times set here a year ago – a clear indication of the progress we’ve been making as a group.  Once car selections were made and tech began, it was obvious there were two camps; one was the Motown center-hinge group comprised of Dave Muse, John and Jon Reimels and Rob Hayes running anglewinders joined by Paul Ryer running a center-hinged in-line; the other group were running LandShark cars with Don Hall running a more traditional in-line and Peter Lentros running a center-hinged anglewinder.  Once the race started, it was clear the battle for the top spot was between John and Rob, John mastering the White and Red lanes with Rob getting the upper hand in Yellow and Blue.  In the end, it’s hard to beat Rob on his home track, he took down the win by less than ½ a lap over John; the only conciliation for John was setting a new lap record of 7.538 seconds.  Jonathan finished third followed by Peter and Paul.

After lunch, the decision was made to forego an IROC race and run another Gravity race in its place.  We only race these cars on a bi-monthly basis and we needed a fix to hold us

over until our New Year’s race the end of December.  After practice, Paul swapped his in-line for a sidewinder he built based on Joel Pennington’s design with the rails necked in where they attach to the front pan to increase flex in the chassis.  Peter  swapped to a sidewinder, this one based on the Motown Center-Hinged design powered by a small M10 motor.  Donny also switched rides selecting another traditional LandShark in-line car from his vast collection of cars.  The rest of the pack stuck with 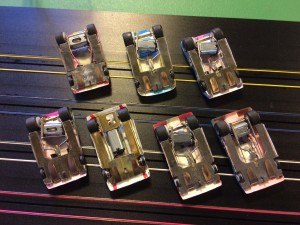 their rides from race one.  Paul clearly selected well, his sidewinder flew around the track besting the lap total set by Rob in the first race by a full 2 laps (but he fell 0.001 seconds short of tying my lap record – JR).  John finished two laps behind setting the same lap total as he did in the first race (nothing like being consistent – JR).  Peter liked the way the M10 motored sidewinder handled even if it was down on power compared to the slightly larger M20 motors, he pushed the car hard to finish third a few sections ahead of Jon Reimels in 4th.  Rob finished 5th, only two laps lower than he did in the first race showing just how close the top of the field is running.  The top five all beat last year’s winning total of 83 laps set by Rob Hayes – again an indication of the improvements we’re making. 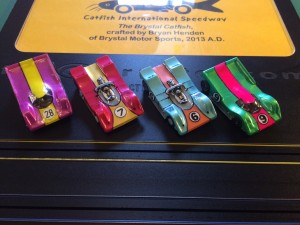 After the race, Rob served his famous Petsi’s Pie, a Cambridge favorite – a perfect way of ending a fantastic day.  Thanks go to Rob for hosting and a huge welcome back goes out to Jonathan Reimels, he has been missed.

As we were packing up, conversation turned to our next event.  Keeping to our bi-monthly schedule, December 30th appears to be a good date.  Traditionally Ryan Archambault hosts an event this time of year but, after a conversation with Ryan, Peter Lentros will be hosting this year at his LenJet Raceway.  We’ll be running Gravity cars on the Boomerang and BRASCARs (basically anything powered by a Mabuchi HT50 motor) on the Parma track.  Mark your calendars!  I’ll send out a race reminder in early December, if you have a suggestion for the third race of the day, let me know.  The default will probably be another Gravity race or HOPRA T-Jets.