October 14, 2017 – Catfish International Speedway, Cambridge, Massachusetts — Our second race of the 2017-18 MARC slot car racing season, and all very excited to try out new updates to our MacPack® power supply, and what this augmented power could potentially yield with four-lane fields of two-ohm CMPM motors. 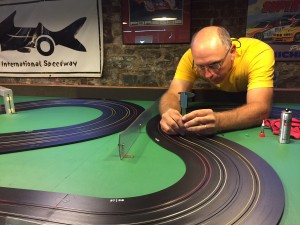 Before we dove in, a wee bit of rail repair.  An errant marshal (or perhaps a demon) had snapped loose short sections of rail on two lanes near the race director station.  Our good luck that mini-railroad mogul Dan DeCosmo had joined us for the day, and effected a super (and quick) repair.  Thank you, Dan!

After 90 min of dialing-in, Sportsman Spec Racer was our first tilt of the day.  Tom Jahl made the trip from horse country, and (whoa Nelly!) showed the Sportsmen the short way around.  He had a very impressive car, and gave it an equally impressive drive.  Perhaps this was the winning car from the Sportsman race here in April, driven then by another member of the Jahl clan?  No matter, Tom cleared Mike “The Machine” Resnick’s total by about seven laps, relying primarily on his strong run in Yellow. 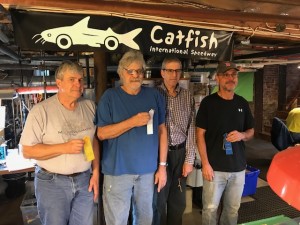 Following Mike were “Nitro” Mike Tiffany, Terry Ayer, Matt Patrick (driving these muy rapido cars for the first time), and Hal Pierce, who seems to have had a broken car when his turn came to run Blue.

So glad to have Mike T. back, after his summer to forget. Among the missing and missed on the day:  Team Medeiros, Reimels Sr., Donny Hall, Oh Jimmy, Bob Withers, Tom Smith, Paul Crosby, and newly minted Floridian Phil Hilgert.  I must be forgetting someone… Oh yes – Peter Lentros!  Musta been racing with some inferior club. 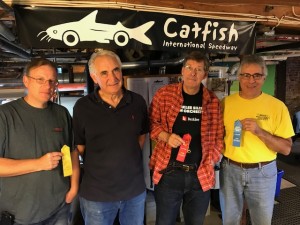 Pro Spec Stock.  Another race, another chance to see Dr. John Pileggi dance madly ahead, pirouetting in victory like Leatherface in The Texas Chainsaw Massacre.  As predicted in these pages, John’s reign of terror continues unabated, now that he’s a full-time civilian.  John won, or tied for, top total on every lane.  He set a new total-lap record for the class, at 298.21, eclipsing his own mark of 294.27 set this past April, by nearly four laps.  He is setting the standard.

Our Track Owner ran John even on both Yellow and White, then lost the race by going three-down to The Doctor on both Red and Blue, while still posting an overall personal best of 292.20.  Stez, with his usual smooth, imperturbable drive, took third, followed by Erik Eckhardt, Jim Mac, Paul Ryer, Tommy Gray, Dave Muse, and Dan DeCosmo, whose Archambauto® threw a wire early in the race.  He woulda been right there. Thus ended Pro Spec Stock. 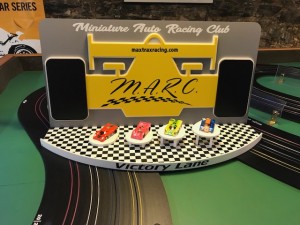 Time for Sportsman Modified.  Another heady performance from en loco parentis Tom Jahl, who this past April was ten laps in arrears of super-son Stephen for the Sportsman Modified win.  This time?  Another superb car, no Stephen, and Tom simply ran off and hid from the rest of the field, with a 38-lap margin of victory.  No, this is not a typo.  Stephen, where are you?

“Nitro” Mike Tiffany, on an overnight pass, taking a brief respite from his doctors and nurses, was second, turning in a classic, Tiffanyesque drive.  Remarkable.  Matt Patrick suffered mightily on Red (but, who doesn’t?), but gathered himself to take third, again, racing the even faster cars on this track for the first time. Matt slipped by Terry on the last lane, Blue, putting up the necessary three extra laps there to take third.  Hal looked great on Blue, had his troubles on the other three, but clearly making progress overall. 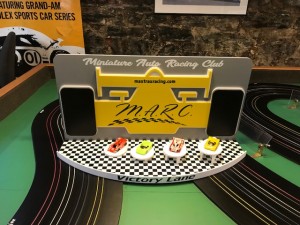 In Pro CMPM, well, well, well!  Shining Time Station’s Dan Decosmo and Erik “The Chauffeur” Eckhardt had a battle royale (with cheese).  Awesome stuff, just the kind of mano a mano, Texas Cage Match we all came to see.  In the end, right at the end, Dan eked out the win by a mere two sections, coming behind from gutter Red, the final totals being 362.39, to 362.37.  Dan and Erik both broke Rob’s two-year-old class record of 357.23 by more than five laps.

Dr. John, with a somewhat subpar Red, was third with 355.24, and Rob fourth at 353.29.  Paul Ryer, Jim Mac, and Tom Gray, with serious problems on his first two lanes, brought the Pro field to its completion and conclusion.  Some Small Comfort:  Rob did set the new single-lap CMPM record of 2.889, slicing Dan’s mark of 2.966 set this past April.  Sorry, Paul.

A good, long day was completed in fine fashion with Mississippi Mud, Multiberry, and Cherry pies.  The end! 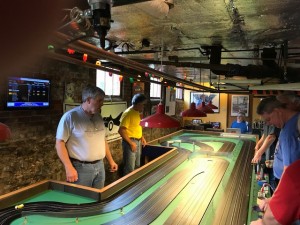 Our thanks go to Digital Dave Muse for helping us along with Lanemaster®, to superspouse Gretchen for providing our donuts, and pianist extraordinaire Witness Kabelo for his renditions of a Duke Ellington blues, and the U.S. national anthem.  Bravo, Witness!  Large gratitude to everyone for coming, and, as always, XXL thanks to Bryan Henden of Brystal Race Systems for our fun-fun-fun Brystal Catfish racetrack.

For all of you fans of Sir Isaac Newton, Gravity Racing of New England (GRoNE) will hold its next, ultra-gravitational extravaganza right here at Catfish International on Saturday, November 4.  If you haven’t tried gravity racing yet, you just don’t know.  It’s sorta like time travel, but you don’t need Stephen Hawking.  Plenty of fast loaner cars are around, and we welcome your participation.  You will smile like a baby with his/her first taste of chocolate cake.