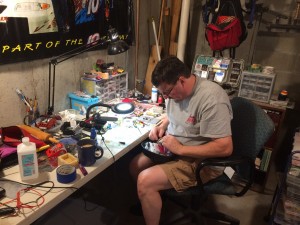 South Shore Speedway's host, Paul Ryer thrashing away on his latest build - Paul has caught an awesome case of the Gravity Bug that's spreading across New England - No Known Cure

Hingham, MA.  While the turnout was a tad low, we made up for it with the eagerness of running some new equipment.  Rob Hayes débuted his latest round of changes to his Scott Terry anglewinder – this time Rob added a center-hinge to his well tweaked chassis as well as installing a tuned motor.  Paul Ryer tried out his latest concoction – a center-hinged in-line chassis, Paul has clearly caught the gravity bug!  I was running a new configuration for the M20 motor with magnets and bearings sourced from China through Alibaba.  We also had two newbies to the group, Bill Craven and Dave Muse.  Bill won a gravity car at a recent fund raiser for a fellow slot car racer in need and wanted to try it out.  Dave has been a staple in magnet car racing for many years and thought it time to try out gravity racing.  Tom Gray got the long-distance award making the trek down from New Hampshire.  But, before we get into the Gravity Racing, we had an ECHORR T-Jet race to run.

With Dave Muse stuck in Boston traffic, Paul’s son, Tom, was recruited to take his spot. 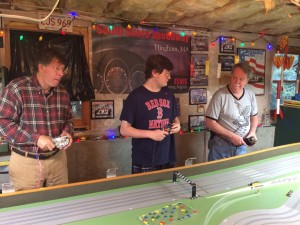 Six racers work nicely on Paul’s track which can be marshalled with two nimble, attentive turn marshals (too bad we didn’t have any, hahahaha – JR) allowing all four lanes to be run in a simple round robin format.  After an hour of practice, all were ready to see who had the best ride.  Paul Ryer had a miserable time in the tough Green lane leaving the door open for John Reimels to steal the win.  Rob Hayes had an interesting race, his best lane total was in Green but he fell off the pace in the easier center lanes finishing 3rd  (go figure – JR).  Sam, Bill and Tom had a real close race for the remaining positions with local knowledge proving hard to beat with Sam finishing 4th followed by Bill and Tom.

Next up was practice for the gravity class.  With all the new equipment, there was lots of action in the pits in the quest of getting the cars set-up to handle South Shore Speedway’s tough 330 degree donut and the two 180 degree hairpin turns.   As the fumes from solder flux wafted throughout Paul’s basement, it was time to see what everyone had – unplug the soldering irons, put away the tools, it was time to race.  Paul Ryer abandoned his center-hinged in-line late in practice and reverted to the 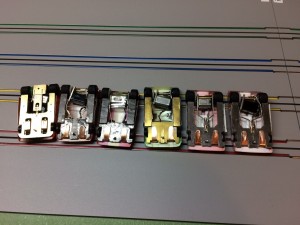 Now the important side - the Bottom View

sidewinder he used at this year’s Nats; after some serious thrashing, Rob appeared satisfied with the changes he made to his Scott Terry anglewinder so the field was set.  This time Paul did not mess up the green lane, he ran a real smooth race finishing two laps ahead of John Reimels who using his anglewinder design debuted at the Nats.  Rob Hayes finished a strong third with late arrival Dave Muse finishing a very competitive 4th after running only a few minutes of practice – the first time he’s run a gravity car.  Rounding out the field was Tommy Gray in 5thand Bill 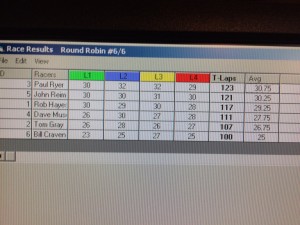 Finishing Results of the first Gravity Race of the day

Rather than race some IROC cars for the last event of the day, the decision was made to have another round of Gravity racing (we only get to race these jewels once every two months… – JR).  Most drivers stuck with the cars they ran in the first race but Paul “Never 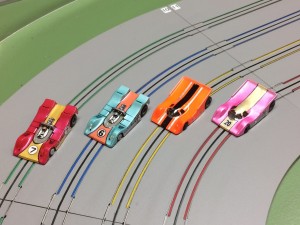 Do the Same Thing Twice” Ryer swapped his ride for his original sidewinder built about 6 months ago.  Rob continued to fine-tune his car during practice working on the pre-load of the torsion springs in search of the tweak that would put him over the top.  With Paul running an older chassis design (with the fast pace of development in gravity racing, 6 months is a life-time – JR), John Reimels was able to run away with the event followed by a resurgent Tom “All I Needed Was a Little More Practice Time” Gray in second place.  Once again, Rob finished in 3rd, 4 laps off the pace he set in the first gravity race, I guess the tweaks didn’t work. 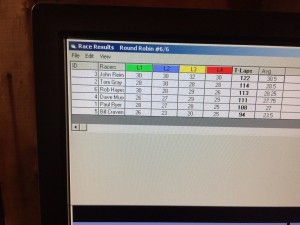 Dave “Practice is Over-Rated” Muse finished 4th garnering the same lap total he got in the first race.  Paul Ryer finished 5th, 15 laps off the pace of his win in the first race with Bill Craven coming home 6th.

The highlight of the race for me was when Rob awarded me a poster for the effort I’ve made to promote Gravity Racing here in New England, the tag line of the poster – Gravity.  It isn’t just a good idea.  It’s the LAW.  I think that should be the new motto for GRoNE!  THANKS Rob, the recognition is MUCH appreciated (as is the awesome poster!). 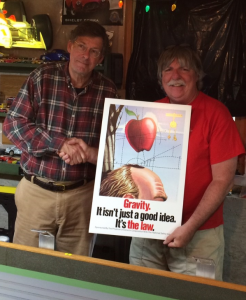 Our next event will be at Rob Hayes’ awesome Catfish International Speedway on November 4th.  Doors open at 8:00.  I’ll send out a reminder in a few weeks but PLEASE mark your calendars now.

And remember -  Gravity, it isn’t just a good idea, it’s the LAW