Ashland, Massachusetts  July 22, 2018   We had 10 racers at the recent GRoNE event hosted by Peter Lentros at his wicked awesome LenJet Raceway.  We were missing a few 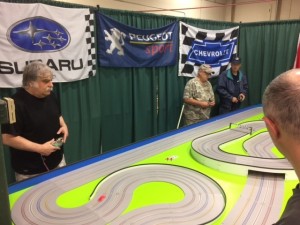 Practice well underway with T-Jets on the Python MaxTrax

regulars because of vacation plans and race date conflicts but 10 racers in the middle of the summer isn’t a bad turnout.   Rather than race our usual IROC BRASCARs, we opted to run two Gravity races instead, one on Peter’s Python MaxTrax and the other on his Boomerang track.  After a brief meeting to discuss the order of events, we kicked off the day running ECHORR T-Jets on the Python.  Turns out most of us haven’t been on this track since the 2016 Nats and that’s a real shame, this track deserves more usage (but with so many tracks to choose from, it’s always a hard decision – JR).  The race turned into a real barn-burner with Peter Lentros taking down the win 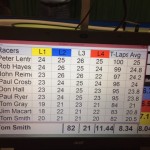 Finishing results for the T-Jet race

with a one lap victory over Rob Hayes; Peter’s mastery of the red gutter lane proving to be the difference.  John Reimels finished 2 laps further in arears once again with the gutter lanes being the difference (me thinks Peter has been practicing on this track… – JR).  Paul Crosby grabbed 4th one lap behind John with Paul Ryer beating out Donny Hall for 5th by just sections.   The top six all finished within 5 laps of each other.  While slightly off the pace of the top finishers, there also was a real tight battle for 7th, 8th and 9th with Tom Gray beating Jim Macartney and Tom Smith all within 2 laps of each other.

After cranking back the voltage to 18 volts, practice for the Gravity cars began.  The twists 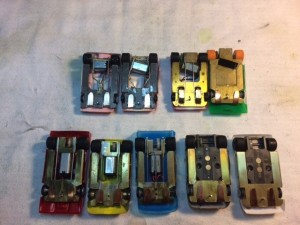 A full and varied field for Gravity!

and turns of the layout hampered the cars from getting on song for more than just a quick blip once or twice a lap (depending on the lane and the courage of the driver- JR) but overall the cars were fun to drive on this track.  We had quite the array of chassis configurations; two lowered Doug Morris AFX cars, three mini-motored Al Thruman based in-lines, one Scott Terry anglewinder, one Al Thurman center hinged anglewinder, one non-center hinged Reimels built anglewinder and one Reimels built center hinged sidewinder. As I said, quite the mix of cars.  My brand new M10 motored center hinged sidewinder proved to be the right car for the track; the power 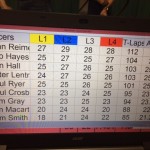 band of the smaller motor suited the track well as did the flexibility of the chassis.  I was able to win the race by 8 laps over Rob Hayes’ Scott Terry anglewinder.  Don Hall finished third, sections behind Rob with Peter Lentros in 4th only sections behind Donny.  Paul Ryer brought his trusty in-line ride home in 5thtwo laps behind Peter.  To further emphasize the variety of cars, the winner was an M10 sidewinder followed by an M20 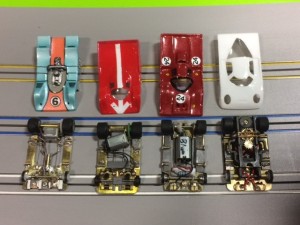 anglewinder, an M30 in-line and then a lowered AFX car.

After a lunch break, it was gravity cars on the Boomerang – quite the change of pace from the Python track – the Boomerang has long straights and fast sweepers with a few hairpins 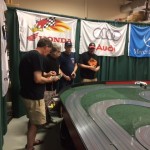 Gravity on the Boomerang - Awesome!!!

thrown in for excitement!  Many drivers chose different weapons for this event, only Rob Hayes and Jim Macartney sticking with their original rides leaving the field with 2 sidewinders, 5 anglewinders and one lonely AFX non-lowered car (Donny H and Paul C had to leave but we gained Sheldon M borrowing a car from Rob).  Paul Ryer and I were both using the cars we ran at the recent Nats giving us a distinct advantage given the relatively short practice session.  We were able to turn that advantage into a one – two finish with me taking down the win using my center hinged anglewinder by 4 laps over Paul’s M20 powered sidewinder.  Peter Lentros borrowed the car I used for 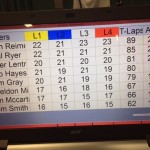 the morning race to finish third, the handling of the center hinged sidewinder able to make up for the lack of speed of the M10 motor (and, of course, Peter’s excellent driving skills…  – JR).  Rob Hayes took his Scott Terry anglewinder to fourth, a lap behind Peter with Tom Gray driving one of my original anglewinders to 5th one lap behind Rob.  Unlike the variety seen in the first gravity race of the day, this was purely an anglewinder / sidewinder battle.

The consensus at the end of the day was that the gravity cars were more suited to the Boomerang track versus the Python; while the Python was fun, the 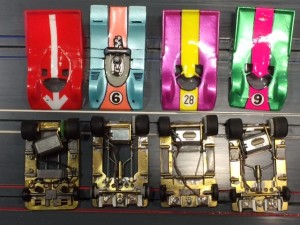 Boomerang was exhilarating.  We also discussed continuing with the every other month schedule for future events, with MARC and the Outlaws running on a monthly basis, trying to squeeze in a third sanctioning body into the mix could put all three at risk for attendees.  Therefore, I will be looking for a venue for September; hopefully I can coerce either Paul Ryer or Rob Hayes to host.  The third Saturday of the month looks promising so pencil in September 16th for our next event.