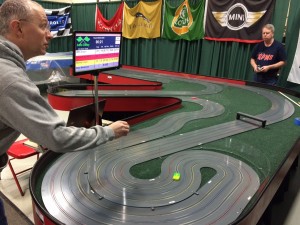 Practice underway for Gravity Cars on the Boomerang

actually racing the 1/24 scale New England Retro Race (NERR) next door in Modelville Hobby!  The schedules for the two events overlapped preventing Peter from running in both.  Being one of the principals that started NERR (1/24 scale brass cars) many years ago, it’s great to see how popular it has become.  I’m hoping we can do the same for GRoNE in the coming years!

Gravity Race on the Boomerang:

First up were the Gravity cars on the Boomerang Track.  For some reason this track heavily favored the mini-motored cars over their brass panned AFX brethren – not sure 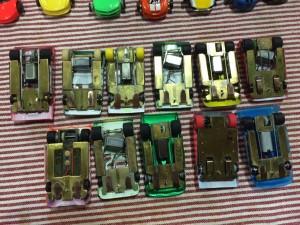 A lot of mini-motors in a variety of chassis configurations

why.  The Boomerang has some really tight turns that tend to favor the AFX cars but it also has some real fast sweepers that the mini-motored cars love – I thought the track would be good for both style cars.  However, for whatever reason, the mini-motored cars were faster – by a lot.  The only AFX die-hard was Ryan Archambault who faithfully stuck with his Doug Morris built AFX car while everyone else abandoned their AFX cars for a mini-motored car – any mini-motored car.  We had 4 anglewinders (two Scott Terry cars and two built by John Reimels), 5 in-lines (four LandSharks and 1 built by John Reimels), 1 sidewinder (a Reimels built clone of Joel Pennington’s design) and Ryan’s AFX brass panned car built by Doug 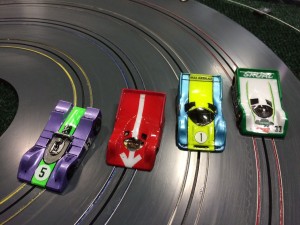 Morris.  When the dust settled (after all, we are racing in the back of a machine shop…) the anglewinders ruled the day.  In first place was John Reimels in one of his anglewinders followed by Rob Hayes one lap back in his well-tuned Scott Terry car followed another lap in arrears by Mike Resnick driving the second Reimels built anglewinder.  The first non-anglewinder was Mike Tiffany in the lonely sidewinder in fourth followed by Paul Ryer in fifth using the in-line car he built using a LandShark kit.  Three different chassis configurations in the top five separated by only 5 laps – that’s some close racing!

Next up were the ECHORR T-Jet Super Stocks on Peter’s immaculate 5 lane Tubbie track.  This track does not get the usage it deserves (too many tracks – not enough time…  -JR). 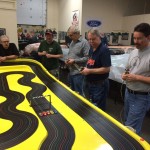 Getting ready to race T-Jets on the Tubbie

I remember running on one of the original tub tracks when I was but a wee-lad growing up on Long Island.  It was located in Hempstead, NY, the home of Aurora – something I didn’t appreciate back then.  But enough reminiscing, on to racing “modern day T-Jets”…   Mike Resnick borrowed a car from Ryan Archambault and proceeded to win the race mainly due to his fantastic run in the red gutter lane.  Mike bettered 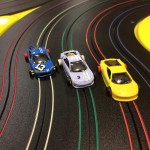 everyone by at least two laps in the red lane helping to give him a one lap victory over John Reimels in second.  Third, fourth and fifth all finished on the same lap with Paul Ryer in 3rd followed by Don Hall in 4th and Ryan (I chose the wrong car) Archambault in 5th.

IROC BRASCARs on the Car Model: 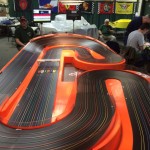 Field lined up ready to start the BRASCAR IROC race

The last race was run IROC style using the original in-line cars that I built over six years ago using the Mabuchi HT50 motors.  These cars have a LOT of miles on them with no major rebuilds – they’re still using the same motors, the same tires (although they’ve been recoated a few times!) and the original bodies.  I’ve lost count of how many times we’ve raced them but it has to be getting close to 30 to 40 times.  Seriously…  Originally we were going to race them on the Parma track but we decided to use the Car Model Engleman 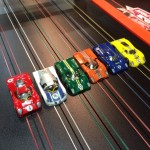 A field of high mileage BRASCARs

instead.  The cars ran great on this track, and once again everyone seemed to have a blast racing them.  The racing was the closest of the event with Mike Resnick pulling off his second win of the day by 1 section over Rob Hayes – yes, that’s one section not one lap!  John Reimels finished third followed by Ryan Archambault in 4th and Don Hall in fifth.

I want to thank everyone that attended the race, it’s through your support that we’re able to host this style of racing in New England.  I know we’re competing with MARC, the East Coast Outlaws and HOCOC for your racing time and dollars so I really want to express by gratitude to you for making the effort to race with us.  THANK YOU.

Our next event will be March 25th at Rob Hayes’ awesome Catfish International Speedway in Cambridge.  Rob hosted an event in November and he’s graciously agreed to host another this March.  Doors open at 8:00 and, if I know Rob, pie will be served sometime during the event.  We’ll be racing Gravity Cars and ECHORR T-Jets.  If time allows, we’ll also race the IROC In-Lines once again…