Hingham Massachusetts, January 14, 2017 – For the past few years the classes for South Shore Speedway have been G-Jet and Super Stock.  CMPM hasn’t been raced here 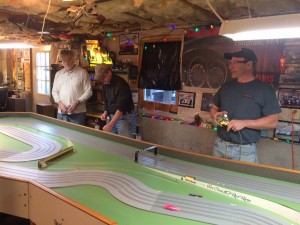 since 2011 and Spec Racer (AKA Spec Stock back in the day) was last raced in 2012.  That was before famed track designer Johnny “Racetrack” Reimels designed a new infield section to spice things up.  So, even though people have more experience with these classes, lap totals were down due to the layout changes.  15 drivers showed up for the racing.

First up were Spec Racers, a class that is getting a lot of attention across the country and a favorite of the MARC crowd.  Sub 3 second lap times were needed if you wanted to see the podium with a couple of 2.6 second laps seen.  Setup was a balance between downforce and heat.  Too low and you might not finish.  First race was for the five 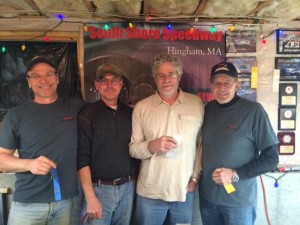 Sportsman in attendance.  Phil Hilgert and Tom Jahl had a battle going on until the red lane where Phil laid down 90 laps to Tom’s 79 laps.  Mike Tiffany and Tom Smith had solid consistent runs in the middle of the group.  Jim Colligan struggled with heat issues until the parts of the car got gooey from the excessive heat.  If only we had been running 3 minute heats!  Top lap count in 2012 was 396.

Phil decided to take a breather so Tom Jahl joined the Pro ranks for the next race.  Stez 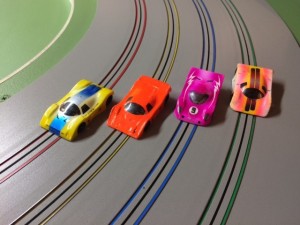 and Pileggi ran away from the rest of the crowd.  Better lap totals in the gutters put Stez in the top spot with Dr. P just a handful of laps behind.  Ryan was fast, but a little loose.  He hung onto it for a third place finish and Paul Ryer squeaked out fourth place over Tom Jahl who ran 20 more laps than he did in the first race.  Great driving Tom!  Top lap count in 2012 was 418.

This year the Sportsman drivers decided to run the Modified class and leave the CMPM cars to the Pros.  If they thought these were going to be much slower than the CMPM cars, 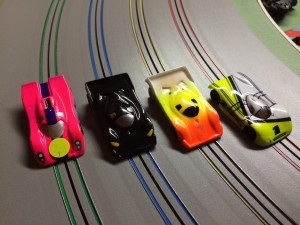 they were wrong.  These things are fast.  Everyone was positive about the class and look forward to running them again.  Slip on tires, 2.5 ohm arms make for some great racing.  This time Tom Jahl was the one who came out on top with Red being a crucial lane again.  Phil took second.  Oh Jimmy was battling heat again, but even with a pit stop to replace a melted pinion, he was able to finish the race.  Car temp at the end of the race was measured at 260 degrees, but the car was still running!  Mike Tiffany was right behind Jimmy for fourth.  CMPM top laps from 2011 were 452.

For the final race of the day the Pros took to the track with their CMPM cars.  Everybody 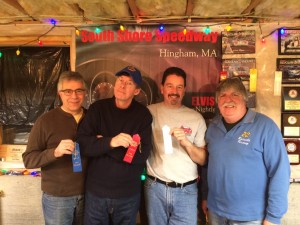 had been chasing a good setup but Dr. P showed the way with a 481 lap total.  Rob Hayes was hot on John’s heels but a tough Green lane was the difference giving him 478 laps.  Ryan and John Reimels rounded out the top four.  Ryan was only 9 laps behind Rob and John was 9 laps behind Ryan.  Pretty close when the lap times hover right around 2 seconds.  Jim Mac had a solid run to finish fifth.

Everyone seemed to enjoy the challenge of the fast stuff on unique South Shore Speedway so I think you might see these classes on this track again.  Thanks to everyone who came out to race.  It was a blast!