Raffle, Pie, and Music; and oh yeah, a Race!

October 8, 2016 – Cambridge, Massachusetts — Our second race of the 2016-17 MARC campaign had some very impressive racing, music and food, and roughly equal showings of Sportsmen and Pros.

Sportsman G-Jet, featuring pre-1972 Le Mans prototype bodies, was our first tilt of the day.  Tom Jahl generated a super consistent 39 – 40 – 40 – 39 set of totals across the lanes to take the win, by a lap and half from Pete Medeiros Jr.  This was a very tight field, with just five laps covering the first five finishers.

Kudos to Mike Tiffany (3rd) and Matt Patrick, both still learning the track, and to Bob Withers, who assembled his car on raceday, and still tied for top lap total on Blue.  Imagine what could happen with more bench time, Bob!

Phil Hilgert joined us at Catfish for the first time in many a year (or was that ever?), and

suffered in Penalty Box Red, while Oh Jimmy had a devil of a time with the dreaded Turn Four hairpin.  You guys will get it!  All of the cars ran remarkably well, and there were some tremendous races all through the field.

Pro G-Jet.  The headline, sub-head, prologue and full text is this:  John Reimels has found something in the G-Jet class that sets him a couple of rungs up on the jungle gym.  We don’t know what it is, but we’d better find it soon, or we could be looking at a runaway this season.  True, he did share the day’s fastest lap, and a new G-Jet track record of 5.772 sec., with Ryan Archambault. But JR won, or 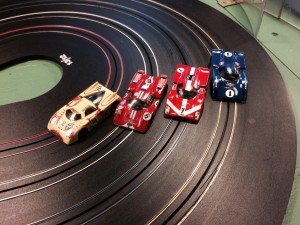 tied for, top total on every lane, and he looked very much at home atop this field.  JR also set a new 20-minute lap total record for G-Jets, 189.16, besting the previous mark, jointly held by Erik Eckhardt and Ryan Archambault. Men, we have work to do.

Stez, always tough in his favorite class, ran a very strong race to come in six laps behind John.  Host Catfish Sr. went through seven of his G-Jets to find one that handled reasonably, did not drive as badly as he is capable, and took third with his Greg Williams-painted Surtees Lola T70 Mk. IIIB, two laps between Stez.  Ryan had some scary speed, sharing the new track record with JR, and was just 1/3 lap behind Rob.  JP did not quite find the range.  He shares the 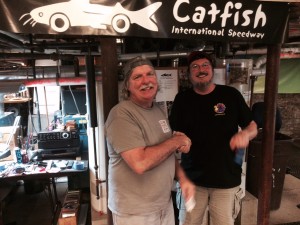 same dark feelings for this class as our host, and they may both be headed to G-Jet Counseling.

Dave Muse had a beast of a car (or was that two beast cars?) in practice, but fortune did not shine upon him this day.  I expect we are going to see top-3 G-Jet finishes from Dave before mid-season, because he’s got some mojo workin’.  Paul Ryer was way off the pace in every lane, and any rational man could easily suspect the hand of ISIS working in the background.  And it was an equally toughish day for both Tom Jahl and Jim Mac.  Thus ended Pro G-Jet.

Somewhere in this next period we had our Drivers’ Meeting, ate our pizza, and our

traditional musical soupcon, to set the proper mood for racing.  Ellie Buckland and Isa Burke, 2/3 of the roots trio Lula Wiles, sang Ellie’s “Let Sorrow Be The Bird,” followed by “The Star Spangled Banner.”   Pure, sweet, sad joy, and so well received by the racers.  Thank you, ladies.

This followed by our annual raffle of a fine 1/32 slot car.  This year, it was the ultra-rare Scalextric Derrike Cope #30 Pontiac.  We had many entries, all to support the day’s meal expense, and we thank everyone who took their chance.  Ellie Buckland agreed to draw the winning ticket, Nitro Mike Tiffany was our lucky recipient, and the #30 headed off to its new home in Wingdale, NY.   Or perhaps EBay.

Also, happy to mention that former MARC Pro Class Champion Jonathan Reimels took a break from house buying to bring his beloved Jen by to see the track and demystify the secret society of slot car racing.  Not half an hour later, after some controller time herself, Jen was overheard trying to convince Jonathan that their new residence had to have one of these slot car track things!  Welcome, Jen!

of the race in three of the lanes, but unlike the 24-lap margin he ran up on the field here last May, this was a far closer affair.  Dave Muse conducted a very dynamic race, running even with Pete on Blue and White, and was less than four laps back (251) at the end.  Very nice job by Dave.  Likewise, some strong efforts from Tom Jahl (247) and New Neighbor Matt Patrick (241).  Phil Hilgert was next with 232, followed by bad hair days for Oh Jimmy at 217, Nitro Mike Tiffany at 202, and Bob Withers (with all sorts of car trouble) at 187.

In Pro Super Stock, Catfish Sr. brought home the blue ribbon, and lowered the single-lap track record to 3.792 sec. (sorry, Paul) with his new G3-RS. But the win was in some doubt

right through the end of Dr. John’s mad-dog, white-hot tear through Penalty Box Red, a lane he completed with seven more laps than anyone else.  JR was third, nine laps behind Pileggi, followed by Ryan, Pete Jr., Paul, and Mac.

Toward the end, we closed out a good, long day in one of the best ways one can, with Multiberry and Chocolate Bourbon Pecan pies from Petsi Pies.  And that, as they say, was that.

No race report would be complete without a shot of the awesome Catfish International Speedway!

Coordinator®, to superspouse Gretchen for locating yet another new donut source in Union Square Donuts, and Ellie and Isa for the soul-stirring music.  Thanks everyone for coming, and as always, thank you Bryan Henden for our truly awesome Brystal Catfish racetrack.