All Feature in Catfish MARC Finale

Cambridge, MA   May 14, 2016   Our final race of the 2015-16 MARC campaign had everything:  a great turnout, including three father/son racer combos, a smoking go at the U.S. national anthem, crazy-close racing, including a dead heat, and two kinds of pie.  If you weren’t here, well dude, you missed it!  Try not to let it happen again, OK? 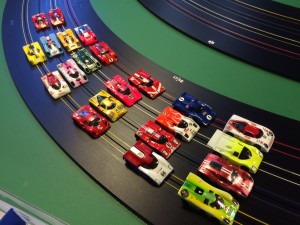 Amateur/Sportsman G-Jet, featuring pre-1972 Le Mans prototype skins, was our first tilt of the day.  Two father/son combos in this one, with the Medeiros clan joined by the resurgent/reappearing Jahls, Tom and Stephen.  The youth they carried the torch highest, and it was Young Jahl, returning to us after a many-year disturbance in The Force, barely nipping Medeiros Minor, by a single lap!  Two laps down in third was Old Jahler, closely followed by Long Distance Award 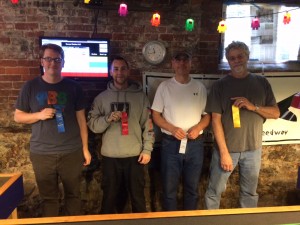 winner Mike Tiffany, Oh Jimmy — running both White and Red in a way he likely would prefer to forget — New Neighbor Matt Patrick, and Medeiros Major, running a game seventh.

Pro G-Jet.  We’ve all seen it this year: Ryan Archambault has made a Pileggian commitment to this hobby. From measuring and matching the tips of every motor magnet, to polishing his arm stacks with imported Eritrean Goat Tongue Wax, Ryan has gone the extra mile in search of speed.  Very impressive indeed.  Has his marriage suffered?   Well of course.  But boy, he is fast. 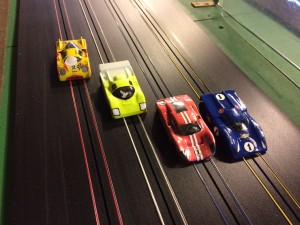 But I digress. Oh Best Beloved, know that even after Ryan had deployed all of his nacho-flavored Oaxacan oils, and Meldonium-infused, Russian silicone sponge rears, this race ended in a dead heat.  In a dead heat with his own backup car, driven by the Baltic Bounder himself, Erik Eckhardt.  So, they shared first place.  In a quarter century in this here club, I have never seen this before, and I don’t expect to see it again.  Amazing.  New track record, too. 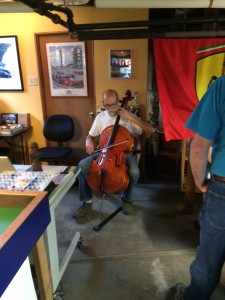 After practice and pizza pie, Portland, Oregon’s John Hubbard, noted HOPAC racer and member of MARC’s 2013 HO Le Mans 2nd place team, was in town to race, eat pie, and… play the cello.  He performed a portion of the Bach Cello Suites for us, followed by an inventive and tasty rendition of The Star Spangled Banner.  Well done, Chumley!

Sportsman/Amateur Super Stock, anyone?  Not so much drama in this one, just a dunkin,’ dominatin’ performance by Pete Jr., who set fast lap of the race in three of the lanes, and rolled up a 24-lap margin on second-place Nitro Mike Tiffany.  This was Mike’s initial time savoring the Brystal Catfish, and he drove a clean, conservative race to the red ribbon.  Huzzah!  Recombinant Stephen Jahl (good to see you!) was third, five laps behind Mike, and three laps ahead of Dad-Jahl.  These Jahls!   Oh Jimmy did not quite have the setup figured, and Our New Neighbor, Matt 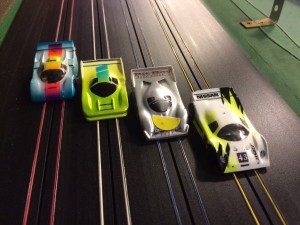 Patrick, suffered on Red like a man with a bad knee.  Matt, we are glad to have you.  Thanks for taking a chance on the magnet cars, and us.

In Pro Super Stock, the top four finishers all eclipsed the 20-minute total lap record, with the top five all breaking the single-lap record as well.  It was a barnburner.  For awhile, it 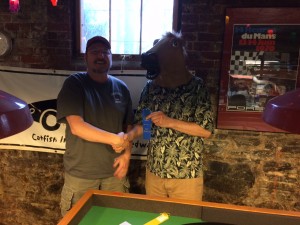 looked like Ryan, who had earlier rejected his highly-developed T-Plus, TycoPro, Artin Extreme, MicroStorm, Lifelike, Bauer, NimbusCat, and Oscar the Track Cleaner-based Super Stock mounts for (eh, what did you finally run, Ryan?) something more conventional…  But, whew.  He just was a blur.  And Dr. John and Reimels Sr. also right there, all under four seconds, consistently.

We had 14 pros, and some very fast cars, from one right through 14.  But only one of the racers has a key to the basement door, and on this day, Catfish Sr. was on a mission, breaking the old Super Stock record by 13 laps, and winning this one from Penalty Box Red.  Nearly in another dead heat were JR and Dr. John, about seven laps back, and a mere three sections apart after 20 minutes. 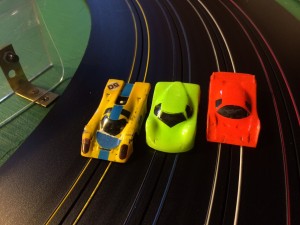 Ryan was less than a lap behind them, followed by newlywed Jonathan, PacNW’s John Hubbard, Mike the Machine Resnick, an out of sorts Mr. Club Director, Jim Mac, the resplendent moveup Tom Jahl, Dave Muse – a better Red would have had him top 8 – Tommy Gray with a miserable Yellow, Erik the Red and Vulcan Vince both with tough days on both Red and White.

We closed out a good long day at the end of a good, long season in one of the best ways one can on this here planet:  with pie.  Congratulations to John Pileggi on a truly dominant Championship Class campaign, winning eight of ten contests.  A stunning display, even considering the history of excellence he has written.  Ryan was our season champ in in the Spec Racer and G-Jet category, with his first season win in the Pro ranks, and probably not his last.  But, boy was it close!

In Sportsman/Amateur, Don Hall took the season crown in Spec Racer/G-Jet, and Oh Jimmy Colligan took the top spot in Championship Class, after a season-long battle with Don.  Some impressive cars, and impressive drives this year.  With a full season from the Medeiros Clan, Mike Tiffany, the Jahls, Matt Patrick, Oh Jimmy, Tom Smith, and the occasional surprise guest, in no particular order, it could be a very interesting 2016-17 Sportsman season!

Many thanks to Digital Dave Muse for his tireless efforts to convert us to Race Coordinator®, to superspouse Gretchen for locating a new donut source when our 10-year bakeshop evaporated, and Porsche Factory Driver John Hubbard for the stirring mini-bass concert, and for being one of the best houseguests ever.  Thanks everyone for coming, and thank you Bryan for a truly awesome racetrack.