Cambridge, Massachusetts, Nov. 5, 2011 – 23 racers, representing seven states, made the scene for the annual Catfish Motel Throwdown slot car race.  A joint race datebetween New England’s Miniature Auto Racing Club (MARC), and NYCONN, our brother HO club just to the south, the program was for G-Jets, and Super Stock.  A great day with friends from all over, hanging in a warm basement, swapping stories, eating pie, and racing toy cars. 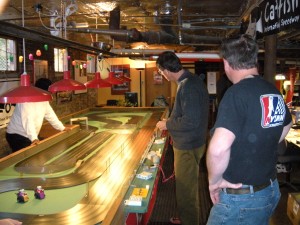 Racers from Colorado, Connecticut, Massachusetts, New Hampshire, New Jersey, New York, and Rhode Island were on hand, and some reunions were on tap.  RI’s Phil Hilgert, in his first visit to Catfish, met up with his Colorado pal Steve “AJ” Hoyt, in town on a personal slot car Haj.  Part of this was Haj to meet up with me; AJ and I were teammates in the Westland (Michigan) HO Racing Assn., forty years ago.  Between seeing Modelville Hobby/LenJet HO Raceway, South Shore Speedway’s Elvis King, and Catfish, we think AJ managed to have a pretty good time on his first vacation trip to the Commonwealth!  Great to hang out, AJ, and we hope you’ll come again! 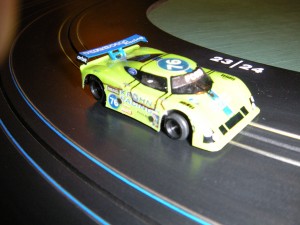 Other first-timers were TriState‘s Pete Barclay, who we have been hoping to host here for several years, and Andrew Stone, who made his way in with righteous relative Dave Muse.  And, good to Jake Boucher after what’s been too long!

To play the Star Spangled Banner, we were joined by Berklee tenor saxophonist Mario Castro, who made his Newport Jazz Festival debut earlier thus summer – his thoughtful, gently reharmonized rendition should be viewable here on the MARC site.  Thank you, Mario.  His new quintet record will be available in the spring.

The G-Jet program was the first run at Catfish with the .450 slip-on silicone rear tires, and they seemed to add about a second to the lap times.   In addition, tire management became an issue, as the Catfish basement was not as spotless as usual.  Keeping the car pointed straight, with a minimum of kick-out, was vital to wringing the highest totals out of your vehicle.  The racing was close, and really good natured.

For some reason, we added a latecomer to the end of the 15-racer Amateur complement, someone who had to arrive late because of something called a “job.”  As was predicted by several of those who know his body of work, Mike “The Machine” Resnick then took this opportunity to vault to the top of the Amateur G-Jet program with a total o 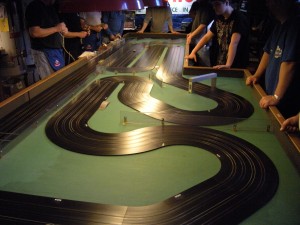 f 177.01 laps, besting fellow Catfish regulars Paul Ryer, at 173.10, and Dave Muse at 172.18.  Southerners Benny Leyro and John O’Brien had strong showings, as did AJ Hoyt, in his second time on the track, the fast-improving Sam Ryer, and Catfish first-timer Phil Hilgert.  You can see the rest of the field in the accompanying spreadsheet.

In the eight-racer Pro column, the pack was tight, except for the top and bottom.  I picked the wrong car out of the box, and then suffered a loose terminal (more shoddy facility preparation!) on Blue, to bring up the rear on my home track.  Topping the field with 189.06 was Inaugural US G-Jet GP Champ, and Catfish regular, John Reimels.  Very planted car, fast, clean race, and these were good for a ten-lap cushion over Dr. John Pileggi at the end.  Pete Barclay did a superb job in his first time on the track to bring his steed home third, just 4.5 laps back of Pileggi, and just a few sections ahead of local G-Jet guru John Stezelecki.  Erik Eckhardt, Tommy Gray, Bill Bonsma, and meself brought up the rear.

After pizza and two hours of dialing in, we began racing the Super Stock cars, which looked like missiles, moving at nearly twice the pace of the G-Jets.

The Amateur program included some very impressive performances, with intense, wheel-to-wheel racing throughout all three round-robin heats.  In the end, Phil Hilgert – man, get used to hearing that name – took the powdered wig with 312.20 laps, just besting Mike The Machine, who was two laps back.  Dave Muse had 300.30, Paul Ryer 295.06, and Tom Bussmann 292.04.  Lost otros, en el spreadsheet.

It was about in here that cherry, apple, and blueberry pies showed up, and were promptly devoured. 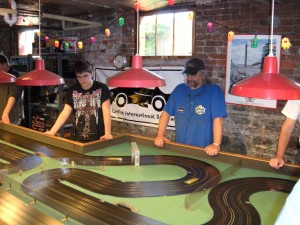 Stez left us for some family event (priorities, hello?), but with Phil taking a move-up into the Pro program, we had eight souls in the hunt.   Dr. John Pileggi drove another outstanding race to best the field, with 347.04 laps, followed by yours truly at 343.24.  An epic battle, deeply fun, on a day when the track wasn’t quite as fast as in previous years.  John Reimels, that Hilgert guy, Erik Eckhardt, Pete Barclay, Tom Gray, and Bill “Unimat” Bonsma rounded out the standings.

A wonderful day again this year; it was great fun to talk with so many great people and racers.  Thank you all for coming!  As the gang packed and got ready to drive away, many gave encouragement to John Reimels, Erik Eckhardt, and myself, as we prepare to contest our second HO Le Mans, in Derby, England, the weekend of the 12th.

The next MARC championship date will be November 19, at Nantasket Beach Speedway, in Hull, MA.   And our next joint race with NYCONN?  That will be January 14 at Mighty Atlas Raceway, in New Milford, CT.   We have the makings of a tremendous season ahead, and I look forward to seeing all of you again very soon.