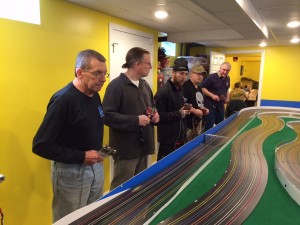 Raceway including Pete and Peter Medeiros making their first appearance of the season, Matt Patrick and Dave Bryden from the local T-Jet club, The East Coast Outlaws and Phil Hilgert who’s tuning up for the 2016 Nats to be held at Peter Lentros’ LenJet Raceway in June.  Also making the trip north was Jerome Burwell from the Tri-State HO Racing Club in NJ.  I guess the word is out, if you like fast tracks, you have to race on Ryan’s Snake Bite track – one of the fastest tracks in New England, even G-Jets were flying around the track and Super Stocks are simply breath taking (and finger blistering – JR).  Two questions were in the air entering the race, would anybody be able to stop John Pileggi’s dominance in the  Pro SS / CMPM division in which he has 6 straight victories; and would anyone be able to stop Donny Hall’s dominance in the Amateur G-Jet / Spec Racer division where he has a four race win streak going.  You’ll have to keep reading to find out… 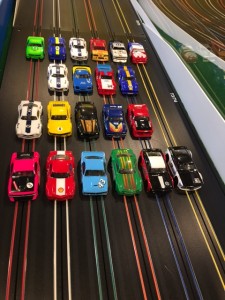 A full field of TransAm cars

First up were TransAm bodied G-Jets.  At 13.5 volts, the cars were flying around the track, somebody must have forget to tell the racers that these cars had no traction magnets.  While all the action (and crashing – JR) was going on, Ryan sat by his workbench helping folks and talking but always with one eye on the computer screen; the *hit eating grin was obvious – he knew that no one was getting near the times he was able to turn the previous night – he could afford to wait until practice was almost over before running his car.  And when he finally did it became obvious he was the man to beat…

We had a nice healthy nine drivers for the amateur race, a far cry from earlier in the season

when we only had 2 – 3 drivers.  The question was who’d beat Donny; Peter Medeiros came the closest but fell 3 laps short, not bad for somebody that hasn’t raced for 10 months.  Phil Hilgert put up real good numbers in Red and Green but he too ultimately fell short finishing third.  Matt Patrick, making his first ever MARC appearance did surprisingly well putting together a real nice race to finish fourth but he too ran out of gas leaving Donny alone in first for his fifth straight victory in this division.  Donny has really pulled together a nice G-Jet / Spec Racer program, looks like he might be racing with the Pros next season.  Finishing out the race was Tom Smith in 5th, O’Jimmy Colligan in 6th, Bob Withers in 7th, Dave Bryden in 8th and Pete Medeiros in 9th. 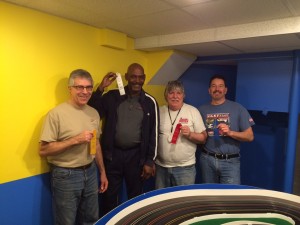 Ryan’s confidence during practice was well deserved, he simply dominated the race putting up high lap totals in every lane but blue (Ryan – what happened in Blue? – JR).  The three Johns were left battling for 2nd with Reimels winning that contest, a whopping 13 laps behind Ryan followed by Stezelecki in third and Pileggi in fourth.  Next up was a battle of the Peters and Pauls for 5th.  Peter Medeiros Jr made the best of the amateur move-up beating Paul Ryer by one lap with Peter Lentros 2 laps further behind finishing in 7th.  Had Peter Medeiros ran the same lap total in the Amateur division, he would have beaten Donny by nine laps; I guess Peter just needed a race to get the rust off his trigger finger – hopefully he’s back for the rest of the season.  Finishing out the top 10 were Mike Resnick, Tom Gray and Erik Eckhardt. 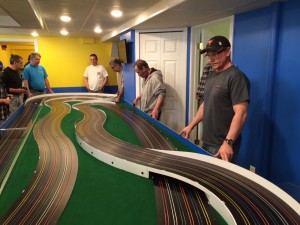 Practice underway for SS on the Snake Bite

With the G-Jets tucked safely back in their pit boxes, it was time for the fast stuff; and boy, super stocks on this track are fast.  With the proper set-up, it’s a few quick blips and then drive the key-hole – wicked awesome.  Ryan appeared to have the field covered in practice but John Pileggi was bound and determined to keep his 6 race win streak alive.  By the end of practice, John found something (or was he sand-bagging it the whole time – JR); it was going to be a barn-burner, or so we thought… 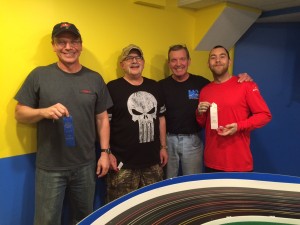 With Tom Smith’s and Dave Bryden’s departure, the amateur field was down to 7 racers, still a very good showing for this division.  As soon as the green flag dropped it was apparent that Phil had the set-up nailed; while O-Jimmy, Donny and Peter Jr were fast, no one could match Phil Hilgert’s pace.  To put it simply, he was gone amassing a whopping 53 lap victory over second place finisher Donny Hall.  Peter Jr and O’Jimmy pushed Donny hard but just came up short in third and fourth respectively.  Rounding out the field were Bob Withers who came back strong after a pretty miserable first heat in red, Pete Medeiros who ran a very consistent race across all the lanes and Matt Patrick who had an equipment failure in orange killing all hopes of a better finishing position.  Matt was racing his first magnet car Super Stock race in many a year, the smile on his face indicating it won’t be his last!

Whatever John Pileggi found at the end of practice, it worked (maybe we should shorten practice to 30 minutes…  -JR).  Ryan and John Reimels put up a valiant effort but were woefully short of seriously challenging Dr P; Ryan had a car problem and John lost a pick up shoe but even without these problems, Dr P had the field covered.  John Reimels recovered to finish 2nd followed by Ryan Archambault in 3rd.  Phil Hilgert was off the pace he set in the Amateur race but he was still fast enough to finish 4th beating Paul Ryer to the line by one lap.  Peter Lentros finished 6th followed by Erik Eckhardt and Jerome Burwell rounding out the top eight.

With his victory, Dr P has now won 7 races in a row.  The only blemish on his record being his third place finish at the opening round way back in September.  If he merely shows up for the next two races, he will have accumulated 750 points, the maximum number of points possible.  I’m not sure if that’s ever happened in MARC’s history – it certainly hasn’t happened since I’ve been a member.  Hats off to John who has really upped his game and everyone else’s trying to compete against him.

Thanks to Ryan for hosting his event, once again I’m reminded how many top notch facilities we have at our doorstep.   New England is a great place for Slot Car Racers!

Next Up – April 23rd at LenJet Raceway with Spec Racers and CMPM on the docket.