Ashland, MA  February 13, 2016- With 6 races now in the books a few things are becoming evident about our current season.  First, apparently nobody wants to win the

Practice on the Purple Mile

G-Jet / Spec Racer class championship in either division, we’ve had 6 winners in six races in the Pro division with 4  different winners in the Amateur division – Donny Hall being the only repeat winner.  Second – John Pileggi is back – he’s on a real hot streak in the Super Stock / CMPM division with 5 straight victories, the only blemish on his season is his third place finish in the season opener at Durf’s and it should be pointed out he won the 5 minute round robin there, he only fell to third in the Main; talk about total dominance.  Let’s hope his run of success continues throughout the Nats this year!  Speaking of the Nats, in order to conduct a planning session for this event

Practice on the Tubbie

after the race, we shortened the practice schedule for the day.  Rather than separate practice for G-Jets and Super Stocks, we opened both tracks for one 2 hour practice session.  As expected, some folks loved the change, other didn’t…  Let’s just say if you had issues, you were in trouble.  After the 2 hour practice session it was time to race.  We had 13 Pros and 6 Amateurs in attendance, not bad for a race the day before Valentine’s Day – I hope everyone brought flowers for their significant others because we certainly didn’t make it home in time to take them out to dinner.

First up were the amateurs on the Tubbie, the first race for MARC on this historic track.  While the rhythm is the same as the old lock and joiner track it was designed for, Brad Bowman made a super smooth 5 lane insert that flows nicely through the esses and the 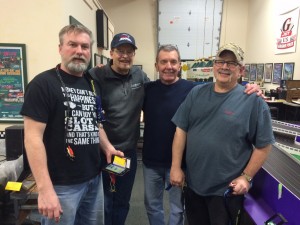 bank without the clickity clack of the old track.  G-Jets were flying around this track (and occasionally off the track) with fast times in the mid 3 second range.  Donny Hall was the clear class of the field building up a 20 lap lead by the finish, he had the highest lap total in each lane and he was the only one to break into the 70 lap mark doing so on 4 of the 5 lanes – the only exception was in the red lane which is clearly the tough lane on this track.  In second was Tom Bussmann who borrowed a car at the last minute and entered the race without running a single lap in practice.  Third place was a hard fought battle between O’Jimmy Colligan and Tom Smith, the nod going to Tom who bested O’Jimmy in the orange lane.  Mike Tiffany, a newbie to MARC but he clearly knows his way around a slot car, finished 5th with Durf in sixth.  It should be noted that Donny had hip surgery a few weeks before the race and was hobbling around on a cane for the day.  This clearly didn’t slow him down but he did elect to sit out the move up to the Pro event which was happily filled by Tom Bussmann.

With the addition of Tom, the Pro field was set at 14 but, based on the finishing results everybody but Ryan Archambault and John Stezelecki should have stayed home.  These 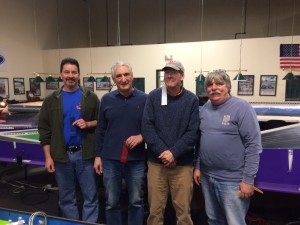 two dominated the event with Ryan bringing home his first win as a Pro beating Stez by 5 laps based entirely on his fantastic run in green with a lap total of 80 – the only person to get into the eighties.  Stez had a “bad green” making only 72 laps relegating him to second.  Third through seventh was a tight gaggle separated by only a few laps with Rob Hayes finishing third, John Reimels beating his son Jon for fourth, John Pileggi in sixth and Peter Lentros in seventh.

Super Stocks on the Purple Mile

After a quick lunch, it was time for Super Stocks on the Purple Mile.  Once again we were 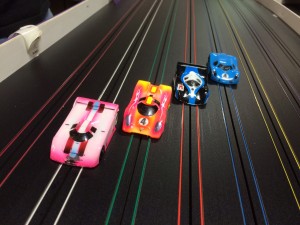 using the center 6 lanes on this track, the extra run-off area that the unused red and black lanes give certainly helps make the racing cleaner.  Tom Smith was done after the G-Jet race but late arrival Bob Withers kept the field at 6.  This time is was Tom Bussmann’s turn to dominate, thanks to his amazing runs in the yellow and purple lanes, he was able to build up a 17 lap lead that Donny Hall, the second place finisher, just couldn’t overcome.  Finishing a strong third was Mike Tiffany followed by O’Jimmy Colligan, Bob Withers and Durf Hyson in that order.

Tom Bussmann once again opted for the move up joining the Pros for their race.  With Stez sitting out the race, the field was set at 13.  Once again John Pileggi was the class of the field, his only vulnerability was in yellow where he dropped three laps to the other top 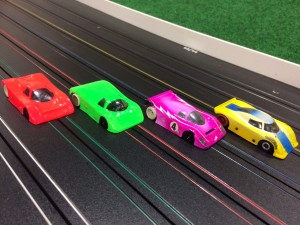 runners but his dominance in the other lanes allowed him to cruise home to the win with a 19 lap cushion over second.  The battle for second was tight with Ryan finishing one lap ahead of Jonathan Reimels with John Reimels finishing 4th one lap further behind.  Finishing out this tight battle was Rob Hayes in 5th 3 laps behind John.  Comparing the results of this race with last month’s run on this track with the Spec Racer class is interesting.  John Pileggi won both events with a total of 450 laps with the Spec Racer and 446 laps with Super Stock.  Second and third in Spec Racer also had higher lap totals than second and third in Super Stock.

Thanks to Peter Lentros for hosting the event.  He’s also hosting the next race on March 12th with CMPM and Spec Racers.  Tracks to be determined shortly.