Three Guys Walk into a Restaurant…

Hingham Massachusetts, December 12, 2015 — Reimels, Vince and I decided to start the day with a tasty breakfast at Stars in Hingham Harbor.  We were strategizing and

planning for the race day when in walked three familiar faces – Pete Barclay and Jerome Burwell from New Jersey and Brian ‘Moe’ Mofield from Ohio.  They had heard of the racing mecca that is the South Shore Speedway and wanted to drive the world famous course.  After some witty banter we headed to the track and so began a day of racing.

Eighteen drivers showed up rub fenders on the Elvis road course.  Vintage NASCAR was the theme for the G-Jet race and once again Peter Lentros made sure there were bodies for everyone with a shipment of freshly painted bodies from Terry Flynn at Harden Creek.  Those, along with the bodies by Reimels made for an authentic looking

NASCAR field.  You could almost see the driver smoking a butt while their cars were being refueled.  Someday we might even get Dr. Pileggi to put numbers on his car if we can convince him it won’t affect the performance. An hour and half of G-Jet practice got everyone in the low 5 second to mid-4 second range.  We were ready to race.

The amateur group, which was much smaller than last year, took to the track first.  Oh Jimmy, Tom Smith and Don Hall lined up.  Don Hall was Mr. Consistent with 54 laps in every lane except red where he laid down 55 laps. Oh Jimmy had a rough start in green but smoothed out and set the fast 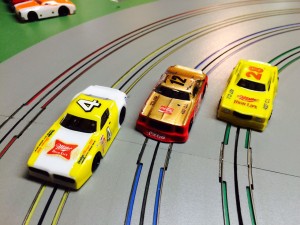 lap of 4.915 in yellow.  Tom Smith had a solid run to end up 4 laps behind Jim.  And that is how they finished.  Don first, Jimmy second, and Tom third.

sixteen.  The top of the Pro field was fast.  Fast laps were under 4.5 seconds with Jonathan Reimels setting a best lap of race of 4.231.  Crazy fast and a post-race tear down of top 3 cars confirmed 9-ohm arms and legal cars.  In NASCAR you hear about the Wood Brothers back in the day and today it’s Hendrick Motorsports.  In G-Jets it Reimels Racing.  They consistently have the cars and skills to be at the top of the pack.  In his rookie Pro season, Ryan Archambault has shown he is a force to be reckoned with.  And that was top three.  John took the podium with just 2 laps more 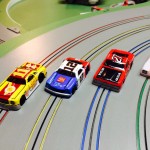 than son Jonathan.  Ryan was just 2 laps behind Jonathan to finish third.  The tricky green lane was the deciding factor of the race.  John Pileggi lead the rest of the pack finishing fourth.  Pete Barclay had a solid sixth place finish.  Pretty stout for his first time on the track.

Stez and Tom Smith decided they had had enough racing for the day so that left us with sixteen drivers for Super Stock.  Since there were only two amateurs, we ran the Pros and 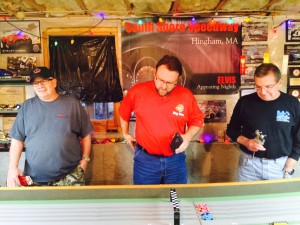 Amateurs together.  After some lunch and two hours of practice most people were ready to race and the rest resigned themselves that they would have to make do with what they had.  The big question when running on Elvis is how low to go.  Track owner Paul Ryer discovered he was too low when he cooked a pinion while running in the yellow lane.  Some taller tires and new pinion got him back on the track.  Surprisingly the car was still running pretty good considering the volcanic temperatures it had been running at.  Donnie Hall also discovered the limit and blew up in the final minutes of the first heat.  At the other end of the spectrum Jonathan Remiels and 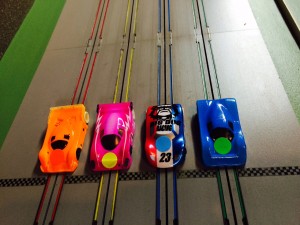 John Pileggi had the setup and were close through the race.  Ryan was close behind them running a Viper chassis.  Ohio Moe and Pete Barclay demonstrated their car building and driving skills by finishing fourth and fifth.   Moe also set the fast lap of the race with a 2.58 second lap in yellow.  Very impressive for a couple of guys who had never been on the track before.   When it was over the drivers moving up to the main were Jonathan Reimels in first, Jon Pileggi in second, Ryan Archambault in third and Moe in fourth.

Drivers were given 10 minutes to freshen up their cars in preparation for the main.  Lanes 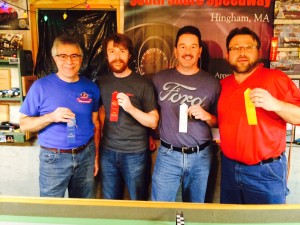 were selected, pictures taken and the cars were lined up.  Four three minute heats would decide the winner.  Use up all your talent and car in the round-robin race and you can drop from first to fourth with a bad run in the main.  Jonathan and John continued their duel from the round-robin race with Ryan right there to jump whoever pushed too hard.  Moe was right behind Ryan ready to jump into third.  Once again Moe set the fast lap of the race with a 2.609, just a tad slower than he previous fast lap. John Pileggi stepped up his pace a bit and took the top spot from Jonathan who finished second.  Ryan and Moe kept third and fourth respectively.  Watching this race was almost as fun and being in it.  Almost.  Great race guys. 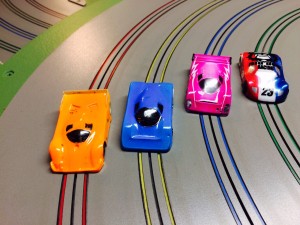 Ribbons were awarded, hands were shook and everyone packed up and headed out.  Thank you to everyone who showed up for another great day of racing.  In particular, a big thanks to Pete, Jerome, and Moe for making the trip.  You guys are a blast to race with and bring some tough competition to the race.  See you at the next MARC race in January at Modelville/Lenjet where the classes will be MARC Spec Stock on the Purple Mile and CMPM on the Viper