Ashland, Massachusetts, October 1, 2011 – With the smell of fresh paint still wafting in the air, 22 racers descended upon Modelville Hobby to see if the hype about the LenJet facility was overblown.  It was not (overblown that is…), with the help of many folks, the facility made its opening debut in grand style!  The walls freshly painted, the carpeting still unsoiled, the artwork hung with care, the overhead lighting glistening off the well groomed tracks  – the only thing that was missing were the curtains for the windows in the break room (which have been ordered!).  Clearly the LenJet HO facility is one of the finest slot car venues in existence and will be hosting many top flight events in the coming years.  New England is lucky to have this in our backyard!

A few changes were incorporated into the MARC rules over the summer; one was to run 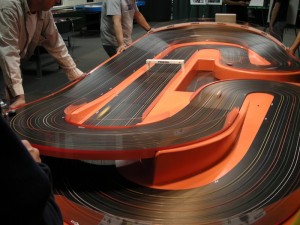 the first race in a round robin format.  With 22 racers signed up and ready to run on the newly refurbished Car Model Magazine Engleman, the field was broken into two groups of 11 racers per heat.  While the Car Model track had been used for a few Wednesday night romps, this would be its official unveiling.  As folks ventured out for practice, you could see the smiles appearing on their faces as they tried to master the tight track.  While it’s a relativity easy track to drive, it’s a real challenge to find its limits, especially with the new slip on tires required for the G-Jet class.  As would soon become evident, those who had prior track experience via the weekly Wednesday night series had a serious advantage.

d the track with John leading the way in his “Pro” classification debut.  John Pileggi and Tom Kanan kept John and Mike on their toes but track knowledge just couldn’t be trumped.  By the end of the race John Reimels had accumulated 429 laps to Mike Resnick’s 418, John Pileggi’s 407, Tom Kanan’s 401 and proud track owner John Stezelcki’s 391.

Would the dominance of the “Wednesday Night Racers” continue in the second heat?  Paul Ryer, Vince Tamburo and Peter Lentros certainly hoped so however Jonathan Reimels proved to be the exception to the rule.   Jonathan and Paul drove off into the distance with Jonathan ending up on top by 4 laps, (417 laps versus 413 laps respectively) blowing the theory that prior knowledge was essential to being competitive.  Rob Hayes took third with the fast lap of the race (3.769 sec) at 404 laps, Peter Lentros ended with 395 laps and Vince Tamburo in fifth with 386 laps.

With G-Jets behind us, next up was pizza.  Stez stood by the LenJet entrance shooing away anyone who dared enter the HO facility with food in hand.  With all the hard work getting the room ready, he was bound and determined to keep it in pristine shape!  I guess there will be no spraying of Champagne in the winner’s circle for the foreseeable future…   As the pizza was settling in our stomachs, the power to the Champion track was turned on for the start of the 2 hour Super Stock practice session.  Racers cued up at the marshalling spots waiting patiently for their time on the track.  With 18 racers and only 4 lanes, track time was a very precious commodity.  As we did last year, the Championship Division is run separating the Pros and Amateurs with the winner of the Amateur race given the opportunity to strut his stuff with the Pros.

With eleven racers, the amateur race was run in two separate round robin heats, divided using last year’s point standings.  First up were Paul Ryer, Vince Tamburo, Dave Muse, John “Turbo” O’Brien, Tom Bussmann and Eric Handel.  Paul dominated the race from start to finish with a winning margin of 26 laps over his closest competitor, Vince Tamburo; Paul ending with 314 to Vince’s 288 laps.  Dave kept Vince honest pushing him for second but fell short with a lap total of 270.  As the drivers for the second heat were hooking up, the question hanging in the air was whether Paul’s total would withstand the barrage from MARC newcomer Mike Resnick and track owner Peter Lentros – both of which have many laps on this innocent looking but extremely difficult track.  Bottom line, nobody could touch the bar set by Paul in the first heat, everyone was running for second place.  Mike ended up winning his heat with an impressive 307 laps, impressive because it was his first time racing a Super Stock!  Peter took second in the heat with 289 laps followed by Don “Mustard” Counts in third with 281.  After debating for a few minutes, Paul opted to try his hand against the Pros, a decision he would not regret…

With anticipation high, the Pro race immediately became one of attrition from the start with Dr Pileggi having axle problems half way through the first heat.  Tom Kanan fell off the pace when he literally wore the rubber off his tires; Rob Hayes

had an uncharacteristically tough time culminating in disaster when he lost a pick up shoe spring after a particularly hard wall shot (Rob – you owe me a $1 for the replacement spring – JR).    All of this mayhem left Jonathan Reimels alone out front with a lap total of 330 laps.  Paul Ryer showed his run in the Amateur division was no fluke by finishing second, increasing his lap count by 4 laps to 318 lap total.   John Reimels finished an uneventful 3rd with a 314 lap total.

Next Up –Freshen up your Super Stocks and take the F1 front wheels off your G-Jets – we’re at Catfish International on Nov 5th featuring Lexan G-Jets and Super Stocks.  I’m sure Rob will have the facility in top notch shape with some musical surprises for us.  And pie, did I forget to mention the pie…