Jerome getting in some early practice

MARC’s  2015 / 2016 season at Durf Hyson’s Thompson Raceway Park in Thompson, Connecticut.  Included in that number were Pete Barclay and Jerome Burwell making the trek all the way from NJ – thanks for joining us!  The only downer was the low number of amateur racers; however with three entrees, the decision was made to run them in a separate event anyway.  Durf’s choice of classes were G-Jets and Super Stocks, however he deviated from his usual choice of CanAm bodies for the G-Jets, apparently Stez convinced him to join the hardbody contingent and run open wheel bodies instead. 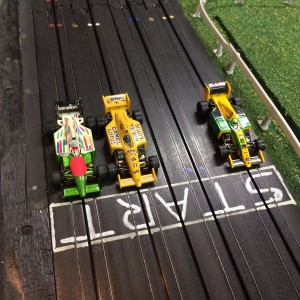 Amateurs ready to kick off the season

First up were the amateurs running a simple 4 heat race.  Durf Hyson showed that he’s run a bunch of laps on this track by walking away with the event setting high lap totals across all four lanes.  In second was Eric Handel with an impressive run in beating Don Hall by 4 laps.  Donny isn’t accustomed to running last, nice run Eric!

With Durf declining the move up, Eric made his first appearance running with the Pros bringing the field up to 14.  Erik Eckhardt is always tough to beat on this track and this year wouldn’t prove to be any different.  Replicating Durf’s feat, Erik set the high lap mark on all four lanes beating Jonathan to the finish line by 3 laps (alright, for the math inclined, Jonathan tied Erik for top lap honors in two lanes – JR).  Pete Barclay finished 3rd helping to make the trip to New England worth it!  Fourth was John Pileggi fresh off carpal tendon surgery (sp???) – welcome back  John.

Next up was lunch; once again Durf changed things up by having a cook out on the grill.  Thanks go to Donny, the grill master for the feast.  While I was looking forward to Durf’s usual home cooked chicken parm sandwiches, the cookout was a reasonable alternative (I have to learn to embrace change – JR).

As the lunch was settling in our stomachs, it was time for MARC’s favorite class – Super Stocks.  Once again practice was critical in finding the right setup for this difficult track.  The fast set up for one lane might be difficult to drive in another lane.  Finding the setup that worked in all lanes was the key.

The three amateurs were first up.  Apparently Donny spent his practice time wisely taking the win by 16 laps over track owner Durf.  Donny’s victory was in large part due to his impressive runs on blue and white.  Eric Handel struggled with his set up finishing off the pace in third.  Now it was Donny’s turn to decline the move up allowing Durf to run with the Pros.

Ready for the fast stuff

With the Pro field set at 13 racers, we met the criteria to have a main event for the top four finishers in the 13 heat round robin race.  Making the main was the aim for the top guns; it’s always more fun to race than turn marshal!  John Pileggi owes some thanks to his surgeon, clearly his recent operation hasn’t slowed him down taking the round robin by an impressive 5 laps over Rob Hayes.  Rumor has it that Rob snuck in a private practice session the week before the race making John’s victory even more impressive.  Jon Reimels pushed Rob all the way to the finish missing second by 1 lap.  The real battle for making the main was among the rest of the mere mortals in the group.  This honor went to Paul Ryer beating John Reimels, Pete Barclay and Ryan Archambault by a few laps.  Ryan was making his debut as a Pro, it won’t be long before Ryan is standing among the more rarefied racers in the field.

With the main set, would anyone be able to catch Dr Pileggi?  The answer was yes.  Some 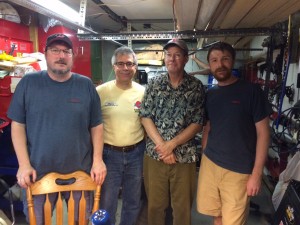 tweaks to his set up paid off and Rob stunk up the race setting extremely consistence lap totals across all four lanes (39-38-39-38).  Jonathan tried pushing Rob but fell off pace in red losing to Rob by 3 laps.  John Pileggi wound up third apparently using up his mojo in the qualifying round.  Paul Ryer had a particularly bad heat in blue relegating him to fourth.   As tech ensued, we learned that one on Rob’s tweaks was changing one of his traction magnets.  A real no-no in HOPRA rules but to the surprise of many, allowed under MARC’s rules.  Rob kept his well-earned win and the rest of us learned the lesson that knowing the rules is important…  Nuff said.