Gravity Cars at the Rules Meeting

Ashland, MA  July 19, 2015 – Based on a suggestion from fellow Gravity Race Advocate, 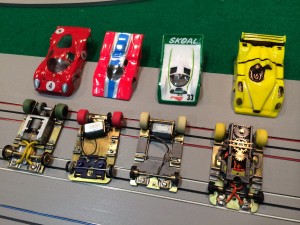 Ryan Archambault, the decision was made to hold an informal Gravity Race at the conclusion of this year’s MARC’s rules meeting held in Peter Lentros’ LenJet Raceway in Ashland, MA on July 18th.  Folks were encouraged to bring their own cars even if they might not pass the gravity pin test but there would be loaners available for those who wanted to give the class a shot before investing the time and money to build / buy one of their own cars.  We decided to race on the Brad Bowman Champion track, an excellent choice.   I was hoping for 8 to 10 racers but was pleasantly surprised when we had a total of 16 racers including Dominic who made the trek all the 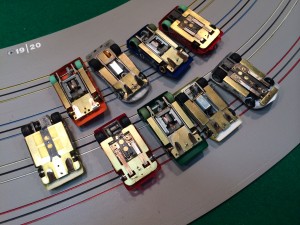 A little bit of everything! And it all worked out great

way from New Jersey to join us!  Between Ryan, Paul Ryer and yours truly, we had over half the field outfitted with cars but, judging by the enthusiasm from the racers at the conclusion of the event, I suspect folks will be procuring their own cars in the near future!  One of the big attractions of this type of racing is the diversity of competitive cars; in the top four we had an AFX Pan Car, a Sidewinder with a Mini Motor, and Anglewinder with a Mini Motor and an In-Line with an HT50 Mabuchi Motor (which would have failed the pin test…).  Racing was close, with only 2 sections separating Ryan’s AFX Brass Pan Car and my Mini-motored Sidewinder.   Peter Lentros finished third after borrowing a Scott Terry anglewinder with pick up shoes from Ryan.  Rob Hayes finished fourth using one of my original cars built to the old BRASCAR rules.  Hopefully the gravity car seed has been planted here in New England and, with a little nurturing, it’ll be able to find its own spot among the active T-Jetters and Magnet Car racers in the area.