Southampton, Massachusetts, March 28, 2015 -The snow wasn’t the only thing flying in Southampton on March 28th. Thirteen HO cars, some of them not only flying on the track but seemingly into low orbit came to Ryan’s Fast Five Raceway.

With a reschedule of dates (already mentioned snow) keeping attendance 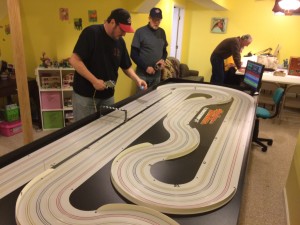 Practicing on the Harley - a perfect match for G-jets

down the racers that came still had a fierce battle. That battle began with five amateur G-Jet racers at 13.5 volts on the twisty Harley Track running Trans Am bodies. Amongst them was new racer Larry LaClair who lives nearby in Easthampton. Larry had come out to LenJet a few weeks back as a spectator and apparently may be hooked after a third place finish on the Harley with 249 laps. Welcome aboard Larry nice job ! 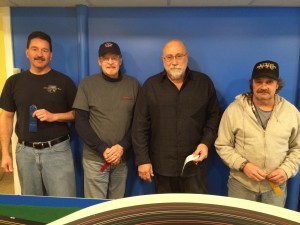 Up next the pros with Ryan taking the move up bringing total to 9 in the round robin. With the short lap length of the Harley this

was a close fast paced door to door race! You seemingly had another car next to you at every moment. When the racing was over the top 5 had only 4 laps between them. Taking the top spot was Jonathan Reimels with 322 laps and top segment total of 84 laps for blue. Second was Stez with 320 laps and 29 sections. Ryan was one section behind with the Mustang (16 inches) at 320 laps after a long battle with Stez’ green Cuda. Fourth was Paul Ryer at 319 who tied the top 3 in white lane at 83 laps. Coming in fifth John Pileggi at 318 who had the best run of the day on yellow at 81 laps. John Reimels sixth, Tom Gray seventh, Jim Macartney who narrowly dodged a concussion (we will raise 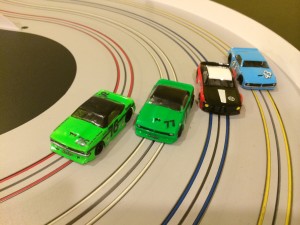 that ceiling next time for you) eighth, and rounding out the field Dave Muse who spent all morning installing race coordinator on snake bite and loading the race heats instead of practicing!

As a result of pleading with the local restaurant Paisanos to deliver 4 large Pizzas (they had no driver ..the cook brought them over!), we downed nearly all 4 of the tasty pizzas in less time than it would later take to find a super stock car in a storage shelf!
With everyone full but salivating to get some track time on the Snake Bite after watching Dan Decosmo run some hot laps earlier it was time for the main event. Five minutes per lane with Ceramic Super Stocks on the 6 lane serpent!

Ten racers remaining allowed 2 hours of practice before the combined amateur and pro round robin. During practice some sub 3.00 second laps were observed. Would that be the norm in the race? With only four people not racing (as opposed to the preferred 5-6) to marshal and direct would the race be one of attrition and survival?

The more than average track calls due to lost cars on the floor and an offending car hungry shelf made it tough for many to keep a good rhythm. Was it new facility blues or the pressure to be the first Marc winner on Snake Bite ? Hard to know for sure. 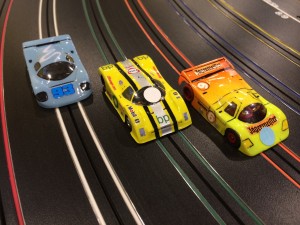 In the amateur ranks we had 3 racers. Pete Mederios Jr. placed third with 320 laps after some overheating issues. Second was Pete at 324. First was your author (never wrote that before) Ryan driving the lone non Scale Auto car, a Slottech T3, at 518 laps.

The top placing Pro in the race was Jonathan Reimels at 511 laps setting top lap totals on the red and orange lanes with 85 and 89 respectively. Second was Paul Ryer at 507 who had the fastest lap on the white lane at 3.122 and tying the top lane total for green at 89 laps with Jonathan. Third was John Reimels at 503 also taking fastest lap on blue lane at 3.179. Fourth was a disappointed John Pileggi at 480 who lost a front wheel in the last segment in a collision 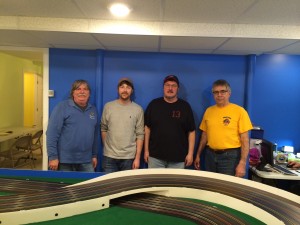 taking him out of the hunt for a top spot. JP had a great run on blue with a top for that lane 84. Tom Gray had a fast running 463 for 5th pro spot, his co traveler Jim Macartney (nothing to hit your head on this side of the basement) in 6th at 460. Completing the field was Dave Muse at 430. Again Dave spent all his time loading the heats and installing Race Coordinator onto the other computer instead of practicing.

Interestingly (?) the top place overall at 518 laps went to amateur Ryan Archambault with that t3. Yeah, of course I practiced and tuned, learned that home track advantage thing from the ever fast Catfish and Lenjet guys! 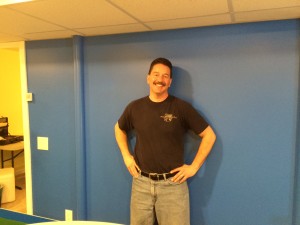 While no one dipped into the 2 second range Ryan had fastest laps on red 3.073 ,green 3.073,orange 3.130 and yellow 3.097 with highest lap totals on white and yellow at 91 and 90 laps. Never thought an overall win would happen but I’m really thrilled it did! It was a hectic race but a fast one for sure (the first of what will be many overall wins, I’m sure – JR).
So the first “magnet car” race at Fast Five is done. Thanks to everyone for making the ride; some pretty darn far. Special thanks to my wife, Luann, for putting up with me (us) making the coffee and putting out the morning treats. Thank you again to Dave Muse and everyone that ran the races. I don’t think I made a mouse click all day. Was great to have Larry join us for his first race and having fun at it too!
We learned a lot about the tracks and had a good time. Thanks for the compliments can’t wait to do it again next season!