Ashland, Massachusetts; March 14, 2015 – While Rob Hayes always supplies excellent pie whenever he hosts a race at his Catfish International Speedway, Peter Lentros had the distinction of hosting his race on 3.14.15, the perfect Pi date that only occurs once a century… 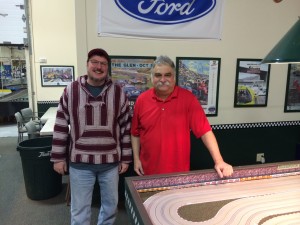 Too bad Peter didn’t serve pie – wait a minute, he DID serve pi, we had pizza pi for lunch!  Way to go Peter.

Twenty one racers (and one very large dog) decided to spend their Pi day at Peter’s wonderful LenJet Raceway located in Modelville Hobby in Ashland, MA.  Whenever Peter hosts a race, the big question is which tracks should be used – there’s just too many to choose from.  G-Jets on the Shamrock Glen made sense, the track isn’t used that much and with St Patrick’s Day close at hand it was a perfect fit.  Peter also wanted to get more time on the Purple Mile so we ran Super Stocks on the center six lanes of this monster of a track – once again a perfect fit.  The field was split with 11 Amateurs and 10 Pros in attendance, it is great to see the amateur ranks swell over the past few races, earlier in the season we were concerned that we might have to combine the groups once again because of lack of attendance in the amateur division – for the last two races we’ve had more amateurs than pros!

G-Jets on the Shamrock Glen 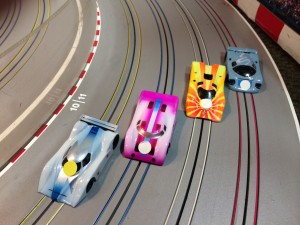 Donny Hall made his presence known setting high lap total in all four lanes beating second place Tom Bussmann by 12 laps.  Ryan Archambault finished third with Tom Smith following in fourth.  Missing from the podium was home town favorite Peter Lentros who would have finished 2nd however he forgot to install his front weight earning him a big, fat DSQ.  Peter took the DSQ surprising well even though it tightened up the point championship considerably.  Thanks to Peter for showing the rest of us how to take a DSQ like a gentleman.  Peter Medeiros Jr finished up 5th with Eric Handel having a good run to 6th.

Don Hall elected not to take the opportunity to race with the Pros so Tom Bussmann moved up brining the field up to a healthy 11 racers.

The Pro race turned out to be a battle of the Johns, with Pileggi, Reimels and Stezelecki finishing in that order separated by less than three laps.  Dr P finally broke his season long drought by taking his first win of the season – racers take note – John Is Back!  Rob Hayes drove to fourth followed by Erik Eckhardt and Jonathan Reimels.  The sensor in white lane went crazy during the Pro race giving false fast laps but the actual lap count seemed fine.  As a test, I dropped the white lane from the race totals and the finishing order remained the same.  Ignoring the times from the white lane, Dr P was the only driver to break into the 4 second bracket with a 4.862 second fast lap – clearly John has figured out how to make G-Jets fly.  (Good thing there’s only one G-Jet race left in the season! – JR).

Super Stocks on the Purple Mile

Amateur – Isaac Handel and Tom Smith decided to sit out the Super Stock race leaving us with 9 racers on a six lane track.  Peter checked his car thoroughly to avoid the double DSQ before proceeding to walk away with the event beating Ryan Archambault to the finish line by 10 laps (alright, 10 laps and one section to be exact).  Peter loves racing on this track and it showed. 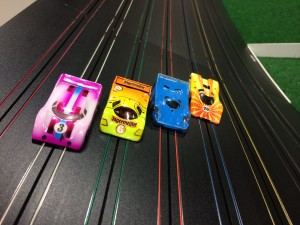 but the low lap totals in the white and blue lanes killed him.  Oh Jimmy Colligan drove the race of his Super Stock career finishing an impressive 3rd on this fast paced track – nice job Jimmy!  Tom Bussmann made his trip up from Connecticut worthwhile by adding a 4th place finish to the 2nd he earned in G-Jets.   Peter Medeiros and Eric Handel matched their G-Jet finishing positions with 5th and 6th place respectively.  Donny Hall had a fast car (as shown by his fastest lap in the green lane) but axle problems relegated him to last giving him bookend finishing positions for the day – first and last…

Pro – Rob Hayes was anxious to get the racing underway, he had a prior engagement and 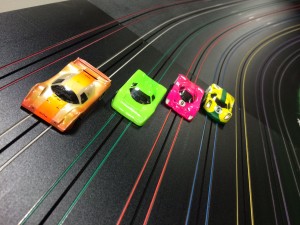 was on a tight schedule.   Maybe the extra adrenaline helped his driving because he was able to squash Dr P’s hope of a sweep by beating him to the finish by 2 laps.  John Reimels suffered from the same problem as Ryan by setting fastest lap in four of the six lanes but only finishing in 3rd.  Jonathan Reimels finished 4th rounding out an unusually bad day for him – maybe it’s the infamous pre-marital jitters!  Erik Eckhardt finished 5th followed by Paul Ryer in 6th.

Thanks to Peter for hosting.  There’s nowhere better to spend Pi Day than at Peter’s LenJet Raceway in Modelville Hobby.

Next race is at Ryan Archambault’s Fast Five Raceway where we’ll be racing G-Jets on his 4’x12’ Harley track and Super Stocks on his 6’x20’ Snake Bite track.  Ryan lives in Southampton, MA – directions will be forwarded in a separate email.