MARC Spec Stock and CMPM cars on the Brystal Catfish

Catfish is ready for action

Discontent we’ve had eight and half feet of snow in Boston and environs. This particular race had been originally scheduled for Valentine’s Day, February 14, but our umpteenth winter storm since the year began forced us to reschedule.

On our new day, two weeks later, I was gratified to have Cambridge (Our Fair City) DPW plow the parking lot, and 18 racers show up to fill it, among them longtime MARC hands Jim Macartney and Dan DeCosmo.  Good deal.

Thank you, Gretchen, for making the donuts, tangerines, and coffee appear. 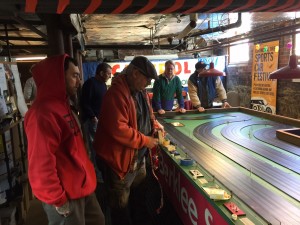 Practice is underway at exactly 8:30!

The power came on at 8:30, and it was seemed right off that the MARC Spec Stock marks set last year were going to be broken.  But a fairly cold room kept tire and track temperatures down, and by the end of practice, we hadn’t seen the big advances we’d been expecting.

Nine Amateurs signed up, and it was quickly apparent that Ryan Archambault, in his first visit to Catfish International, was going to run off into the distance.  Ryan won every lane in the round 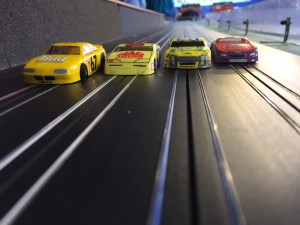 Second through fourth was a dogfight, with Peter (“the hobby’s dying, and us with it”) Lentros narrowly edging out Pete Medeiros Jr. and Tom Bussmann.  This was also the Medeiros Clan’s Catfish baptism, so fine job, Pete!  Jimmy Colligan, Eric Handel, Tom Smith, Don Hall, and Pete Sr. filled out the stat sheet.  Everyone looked good out there, but no one was touching Ryan on the day.  A great car and a great drive.

Nine Pros, and the Ascendant Archambault, took the track next.  And, ascendant he was, improving his winning total from the Amateur program by eight laps and squeezing by Team Reimels (John ahead of Jonathan), and all but one of the Pros, into second place.  Taking the bleu riband was homeboy Catfish Sr., with a new Spec Stock track record of 282.12, an improvement of 11 laps.  Paul Ryer was fourth, and Dan DeCosmo, showing some flashes of his usual form, was fifth.  Dr. John Pileggi threw a wind and was sixth.  Dave Muse, Tom Gray, and Jim Macartney completed the field. 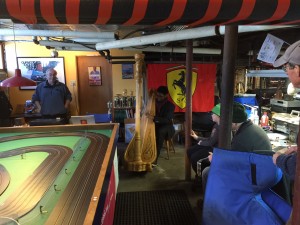 I’m really happy that harpist Charles Overton agreed to haul his rig down to the Catfish basement, to play for us.  He began with a rendition of Wood/Mellin’s “My One and Only Love,” in the style of John Coltrane and Johnny Hartman, and it was mesmerizing.  And then, The Star Spangled Banner, extended and given so much care and attention.  We’ve had some great renditions over the years, but I have to say this vaulted into the top three.  Charles got a vigorous, and very well deserved, ovation.  Thanks for dodging the ice and overhanging pipes to make our days a lot brighter, Charles!

After Compression Molded Polymer Modified (CMPM) practice was complete, and all the cars were in tech, our Amateur CMPM program began.  Amateurs and Pros alike, today everyone chose to run a BSRT G3 or G3-R.  These missiles feature powerful magnets, jewel-like, full-on armatures, ball bearings, and travel at upwards of 25 feet per second.  Somewhere in here pizzas arrived, and were duly devoured with great alacrity. 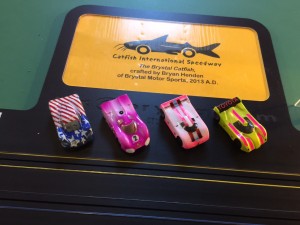 Second through fourth were again very close, and the same cast of characters at the top of the charts.  But this time it was The Pride of Danbury, CT, Mr. Tom Bussman, who had both the setup and a strong drive, taking top lap total on every lane for an overall of 314.  Second again was Peter (Death of the Hobby) Lentros with 295, followed so very closely by Peter Medeiros Jr. — again, this his first time on the Brystal Catfish – and Spec Stock hero Ryan Archambault.  Jimmy Colligan, Don Hall, Eric Handel, and Pete Sr., who suffered a cooked armature in his third segment, completed the field.

At some point midday, Club Director Paul Ryer ran a raffle for a rare, Fly Porsche WSC-95 1/32 slot car.  New in box, never been raced.  We had big participation, which is great, as this helps to defray the cost of the massive amounts of food needed to sate these animals.

Our winner was the only one of us who actually owns a Porsche, the esteemed Oh Jimmy Colligan.  So that was kind of perfect.  Couldn’t have found this sweet machine a better new home, I’d say.

Amateur class winner Tom Bussmann elected to move up to the Pro program, but the nitrous had seemingly gone out of the balloon, as he couldn’t match the totals he put up on his earlier run.  Reimels Sr. had big trouble on his first lane, and so was out of the hunt for the moveup to the Pro Main.  But he put up big totals on his other three lanes, and would have almost certainly been in there otherwise.

After the round robin was complete, Catfish Sr. had high total with 339, a full 18 laps shy of last year’s record, set in a gripping mano-a-mano with John Pileggi.  Dr. John was second today, ten laps back, followed by Jonathan Reimels, a mere 11 sections behind.  Dan DeCosmo, racing for Team Catfish on the day, was fourth, tying for the high lap total on Blue.  So he made the Main, despite being unfamiliar with the hobby.

Nicely done, Dan!   Everyone in the field was running screaming fast.  Paul Ryer, Tom Bussmann, John Reimels, Jim Macartney, and Tom Gray all had the horses, but didn’t find the combo to move up.

Somewhere in the timeline the pies — Apple Pear, Mixed Berry, and Salted Caramel Apple – appeared, many thanks to Gretchen.   Slot car racers love pie, and we are fortunate to have a truly world-class pie shop, Petsi Pies, a mere ten-minute walk from the Speedway. 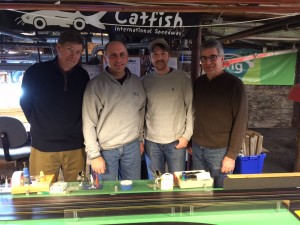 Ok, on to the CMPM Pro Main. An oh-so slightly faster lap-per-minute clip than the round robin, but this one was heart-stoppingly intense, and ridiculously close.  Just what we wanted when we brought back the main event!  Rob started on Red, the track’s penalty box lane, and set high total there, and his four-lap margin over Dr. John’s total on Red was crucial, as John bested Rob’s totals (by one) on every other lane.  Every heat was a total barnburner, with the outcome was in doubt until the power clicked off.  In fact, Hayes thought Pileggi had won, until he set his controller down, and could again focus his eyes on something that wasn’t moving at 26 feet per second.  The cars were screaming, and it could not have been much closer:  Catfish Sr. 204, Dr. John 203, Jonathan Reimels 201, and Dan DeCosmo, 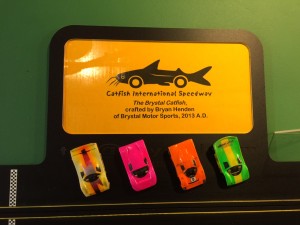 feeling some effects of a lack of practice, still killin’ it with a 190.

Amazing.  Our winner ran BSRT Rocks rear tires, a BSRT 36.5 Spinner arm, and an Aston Martin body painted by our great friend Bruce Beaulieu, who we all miss terribly.

So happy to see 18 racers show, after having to reschedule.  So great to have longtime MARC royalty Mac and Dan on hand, and many thanks to everyone who made the trek in the worst winter in living memory, particularly our first-timers Team Medeiros, and Ryan.

Many thanks to Gretchen, and Donna for help with the food and drink, and to the other citizens of our building, who put up with me transforming the basement to make the race possible.  A big thanks, as always, to Dave Muse for all of his kind attention to the Catfish International race management systems.  Finally, thank you to Bryan Henden of Brystal for our much-beloved Brystal Catfish racecourse.  On to LenJet!